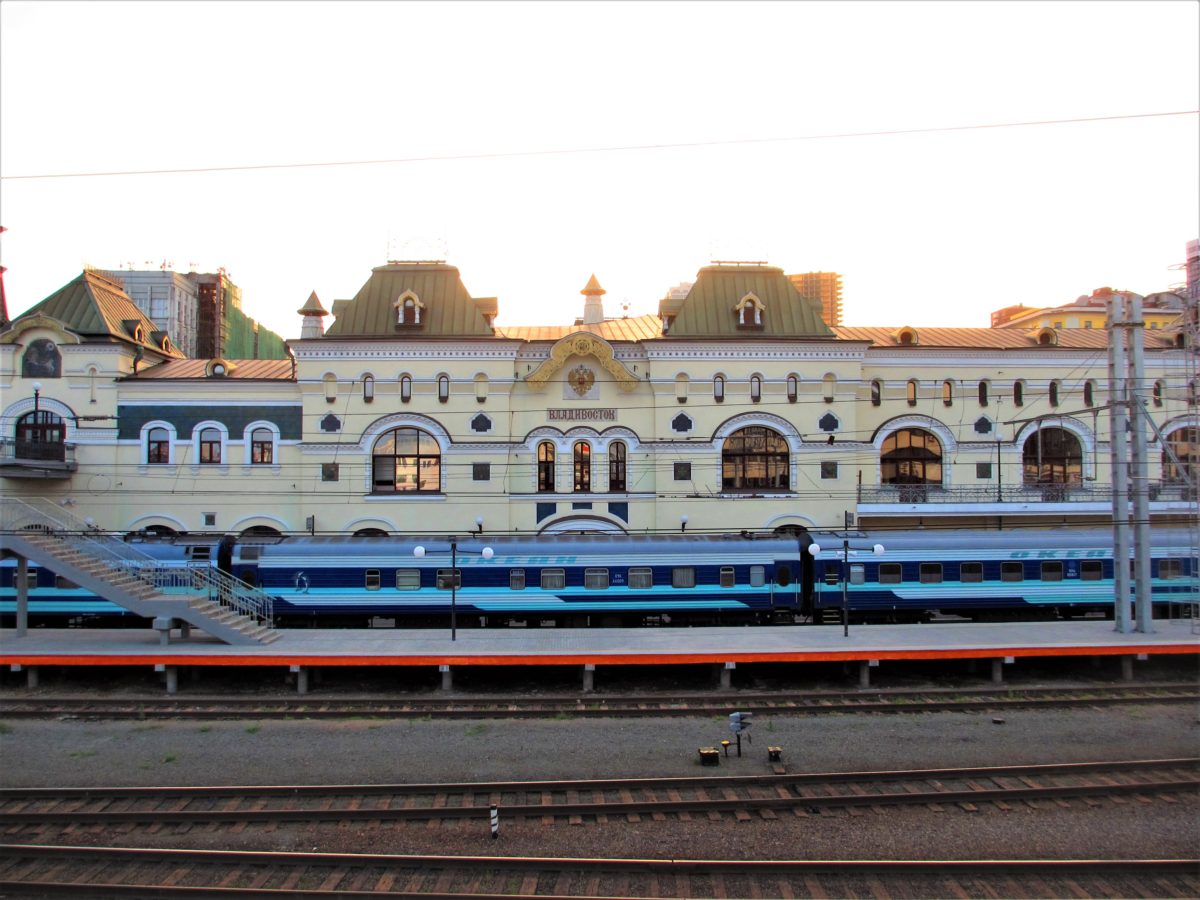 Travel through Vladivostok and Khabarovsk in Far East Russia in a comfortable sleeping car on the Trans-Siberian Railway. One of the pleasures is the experience of the dining car. Even in the Far East, the cityscape is like Europe. Enjoy Russian and Caucasian cuisine！！

View the cityscape of Vladivostok from the sea

Lenin Square, a place of relaxation for the citizens

Let's take a peek at the local life!

Take a walk along the Amur River early in the morning

Grado-Khabarovsk Cathedral of the Assumption of the Mother of God

A cityscape where you can feel European culture while facing the Sea of Japan.

From Tokyo to Vladivostok

From airport to Eagle's Nest Hill
50min. by car 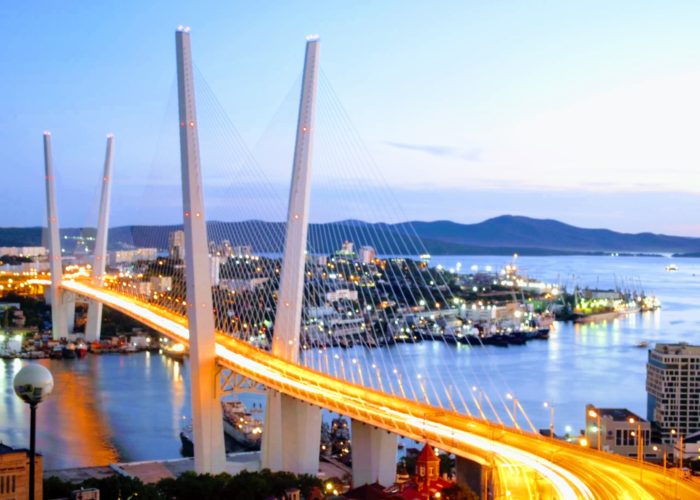 The vantage point offers a magnificent bird’s-eye view over the city and Zolotoy Rog (Golden Horn) Bay. Eagle’s Nest is the most popular and well-kept observation point. In fact, it is an excellent place to start getting familiar with the city of Vladivostok.
Data：Eagle’s Nest Hill
Address/ Primorsky Krai, Vladivostok 690091 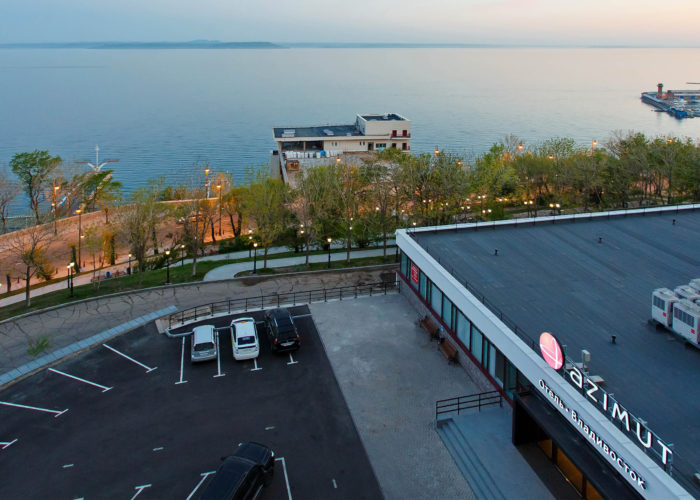 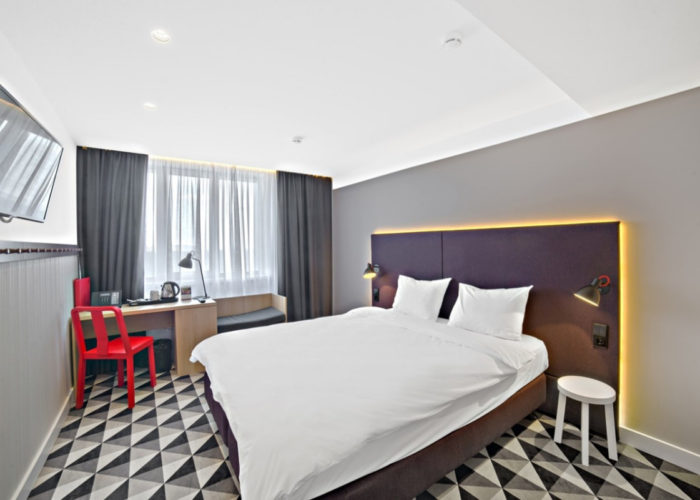 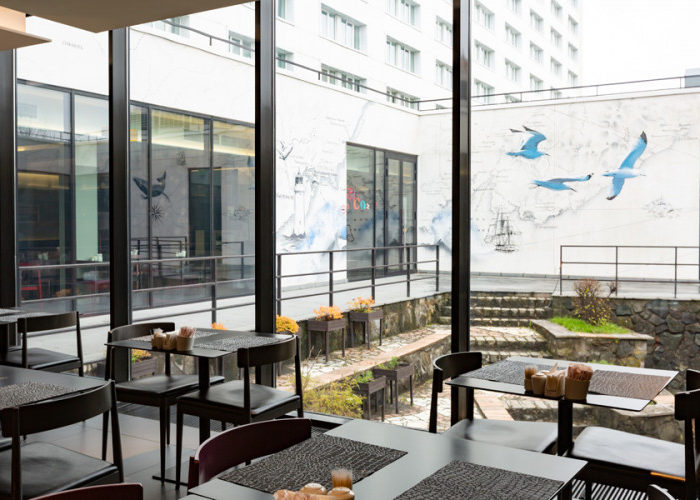 Located on the Amur Bay coast, a 10-minute walk from Vladivostok's train station, it is a convenient base for exploring the city's attractions. The interior is decorated with elegant furnishings. The front and bar are adjacent.
Data：Azimut Hotel Vladivostok
Address/ Naberezhnaya Ulitsa, 10, Vladivostok, Primorsky Krai, Rusia 690091
TEL/ 423 241-28-08

Tour the city by visiting the Russian Orthodox Churches and enjoying a cruise ship.

Depart from the hotel

From the hotel to Church
10min. by taxi 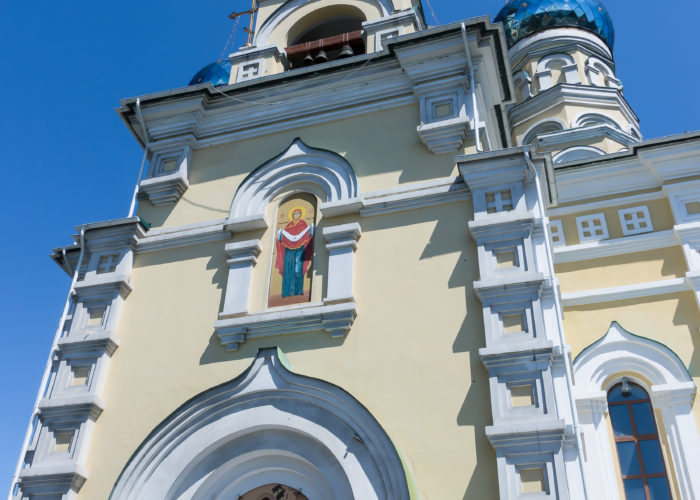 Church of the Intercession of the Virgin Mary

From the church to The Triumphal Arch of the Crown Prince
5min. by taxi 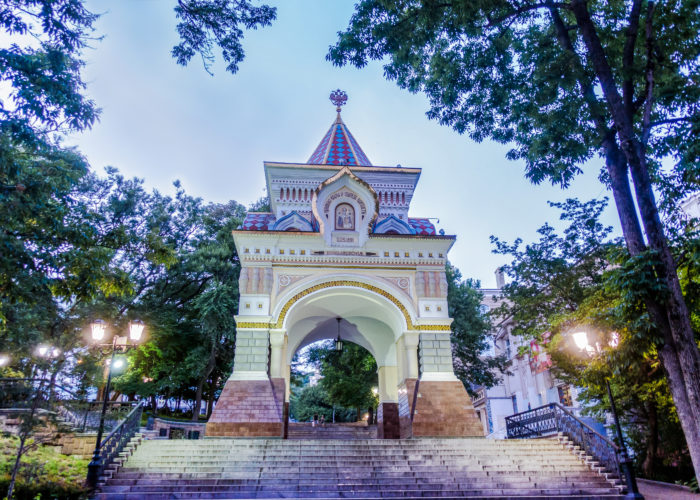 The Triumphal Arch of the Crown Prince 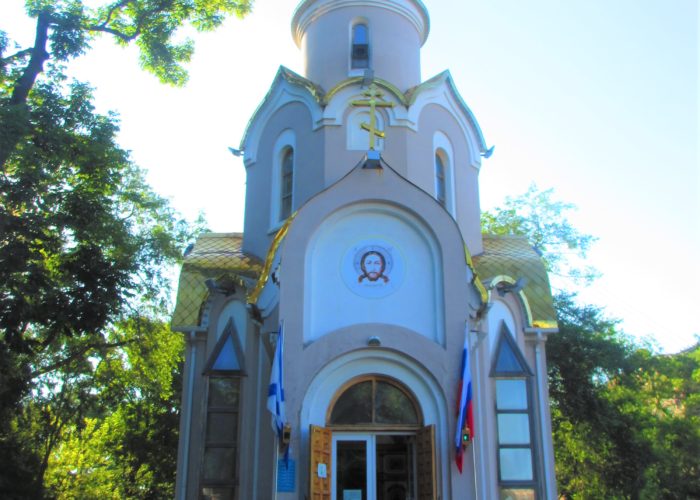 The Andrey Church is located next to the Nikolai’s Triumphal Arch and above the memorial to the war dead. Many saint paintings are displayed on the wall. This area is often used as a commemorative photo for marriage, and you may be able to see the bride in a dress ♡
Data：St. Andrew's Chapel
Address/ Primorsky Krai, Vladivostok, Ulitsa Petra Velikogo 690091 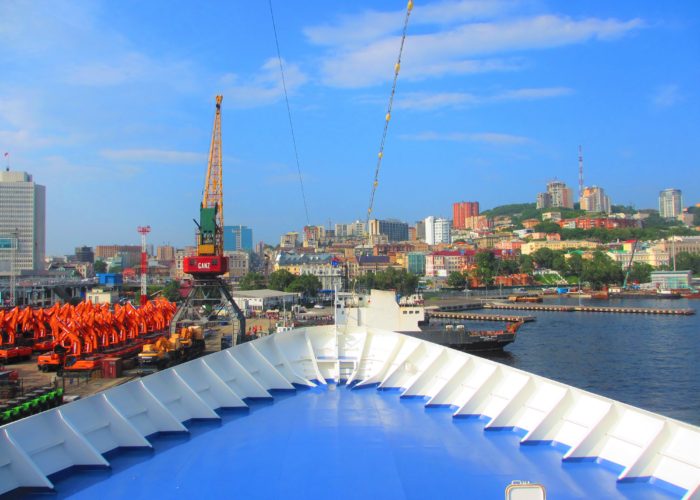 This exciting cruise passes under the famous Golden Horn Bridge in the Golden Horn and goes around to Russky Bridge in the Sea of Japan. The time zone is from morning to sunset, so join us at the perfect time! You can enjoy the cityscape of Vladivostok in a short time. 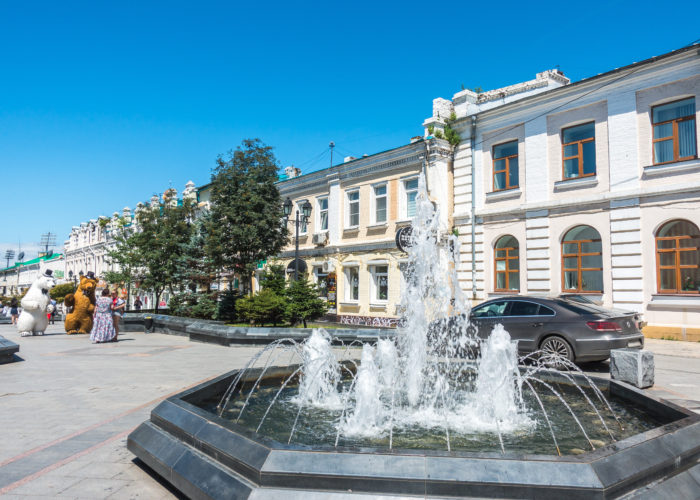 In recent years, it was nicknamed “Arbat”. Admirala Fokina – a street designed for leisurely descent to the sea with the sound of fountains and street musicians play. There are cafes and shops in the back alleys, and at night, stalls and bars open along the sports bay leading from this street, so you can enjoy it until late at night. 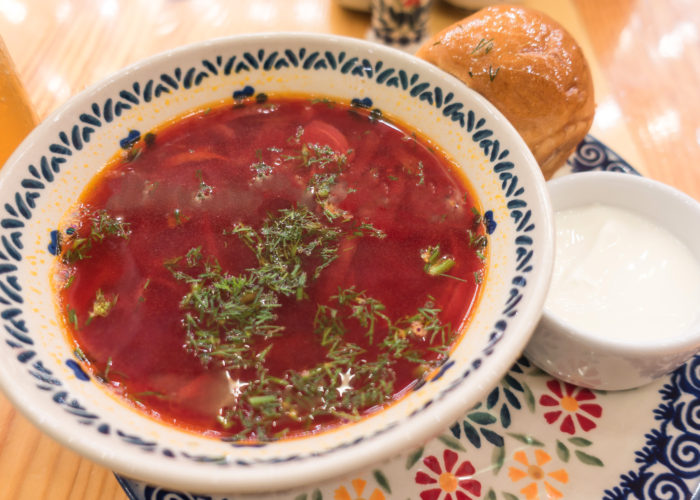 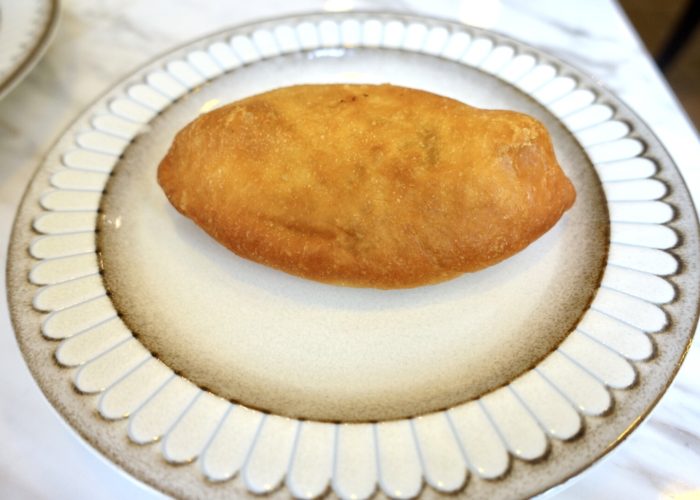 Borsch, a classic Russian dish, is a red-colored vegetable soup characterized by the faint sweetness of beets. Sprinkle with Smetana (sour cream) if you like.Piroshki is also famous! You can buy it at the stalls at the station, so it's good to eat along the way. Pelmeni, which is said to have been originally introduced from Mongolia, is a Siberian regional dish, so to speak, "Russian Feng Shui dumplings". Eat with butter, sour cream, mustard, vinegar, etc. 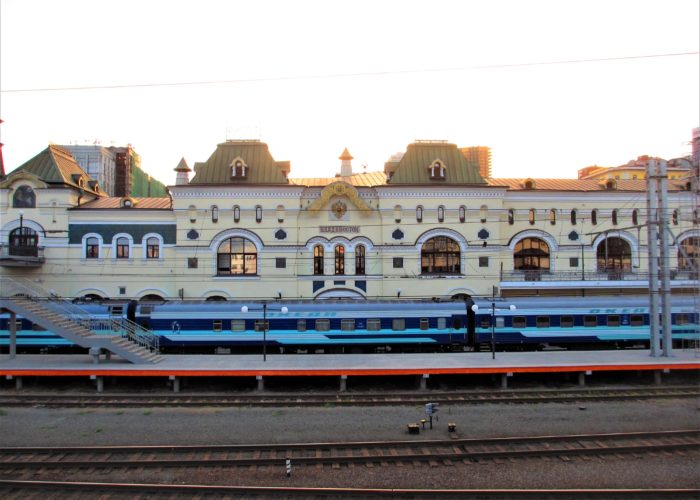 Take the Trans-Siberian Railway to Khabarovsk, the main event of this time!! When you enter the entrance of Vladivostok Station, there is a waiting room with a high ceiling, and Moscow Sta. and Vladivostok Sta. are drawn on the ceiling. The stairs leading to the platform and the chandelier are designed elegantly.
Data：Vladivostok Station
Address/ Ulitsa Aleutskaya, 2, Vladivostok, Primorsky Krai, ロシア 690091 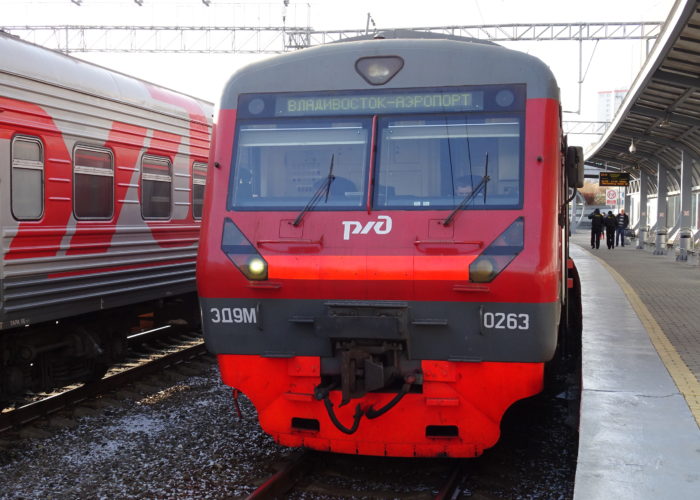 It is a daily train, taking 11 hours to complete its journey. The train has VIP 1st, Regular 1st class, 2nd class and 3rd class compartments, all with air-conditioning and vacuum toilets. The restaurant has an original menu which features local dishes, which can be served in the traveler´s compartment or in the restaurant car.

Let's take a walk through the city with its beautiful decoration and curvy architecture.

From the station to the hotel
15min. by taxi

Leave your luggage at the hotel and head to the city.

From the hotel to Cathedral
2min. by walk 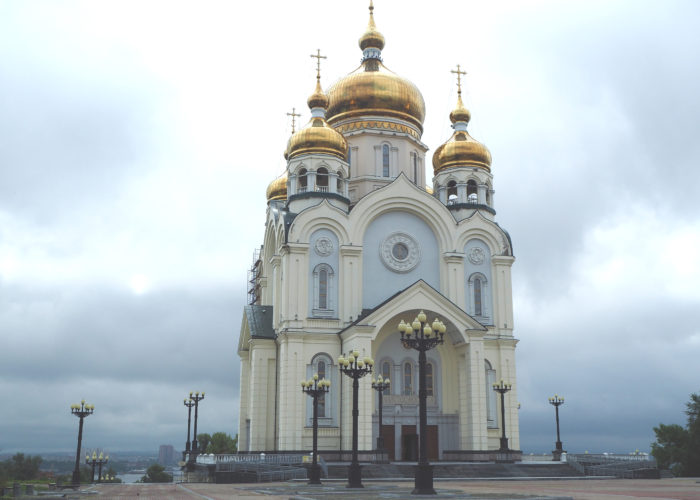 Spaso-Preobrazhenskii Cathedral is one of the Russian Orthodox churches that many tourists visit. The 70-meter-high church is the largest in the Russian Far East, and the golden roof on the hill is clearly visible from a distance. There is also a World War II memorial in the square.
Data：Spaso-Preobrazhenskii Cathedral
Address/ Ulitsa Turgeneva, 24, Khabarovsk, Khabarovsk Krai

From the cathedral to Lenin Square
7min. by car 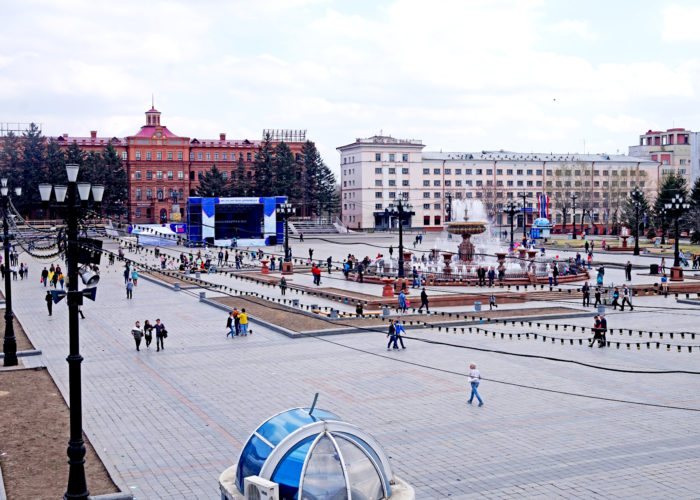 Lenin Square is the central square of the city of Khabarovsk and the second largest square in Russia. There are many fashionable buildings around the square, and there are restaurants and cafes, so it's fun to walk.
Data：Lenin Square
Address/ Khabarovsk, Khabarovsk Krai 680000 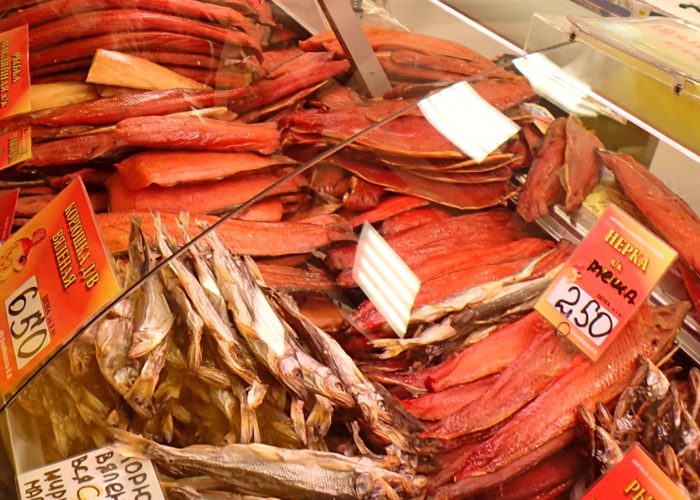 The real pleasure of traveling is to experience the local life! The Central Food Market sells not only meat and fish, but also Russian sweets by weight, and honey and mushrooms from nearby forests. There is a shopping center on the west side, where you can buy clothes and daily necessities.
Data：Khabarovsk Central Market
住所/ Ulitsa L'va Tolstogo, Khabarovsk, Khabarovsk Krai, 680000

From the market to the hotel
15 min. by taxi 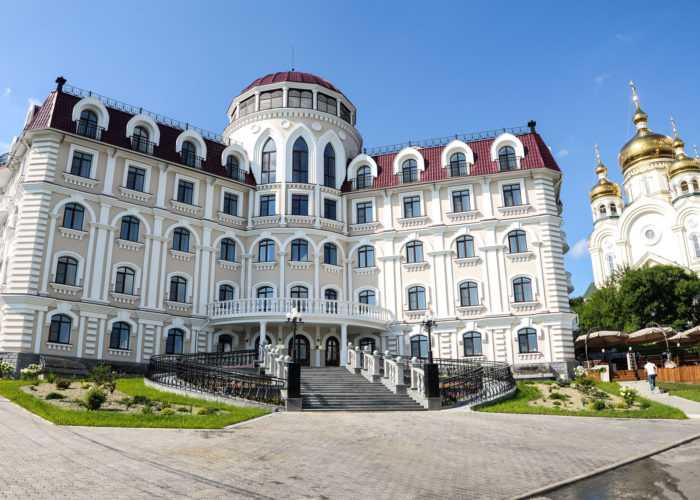 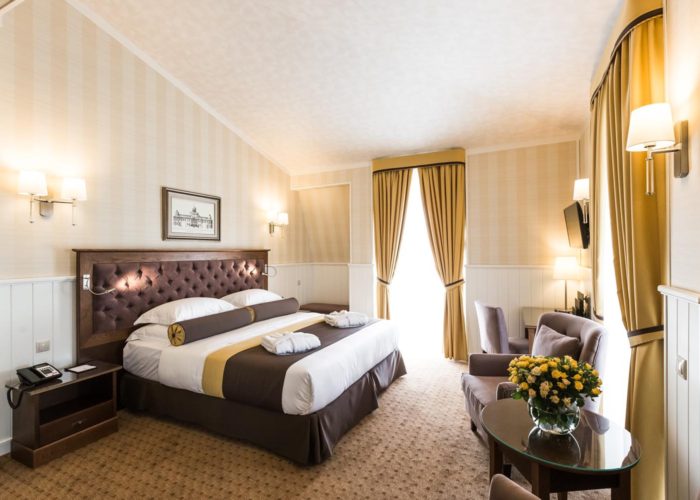 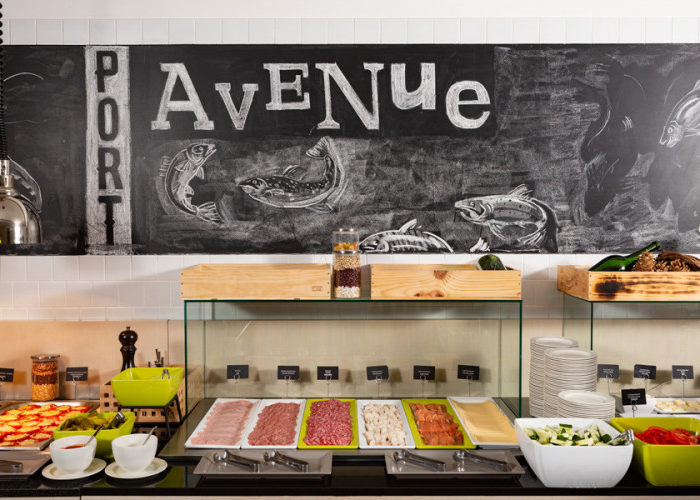 Visit the beautiful Russian Church and stroll along the Amur River, which has many historical buildings.

Departure from the hotel and head to Amur river. 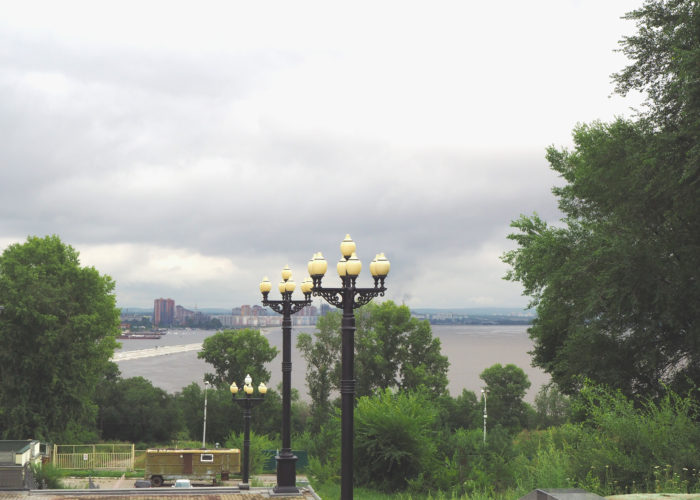 The Amur River, which runs along the border between Russia and China, has a total length of 4,440 km !! The open space along the river has an observatory, an amusement park, a soccer museum, and so on. There are also archaeological museums and local magazine museums.
Data：Amur River
From the river to the Cathedral
７min. by walk 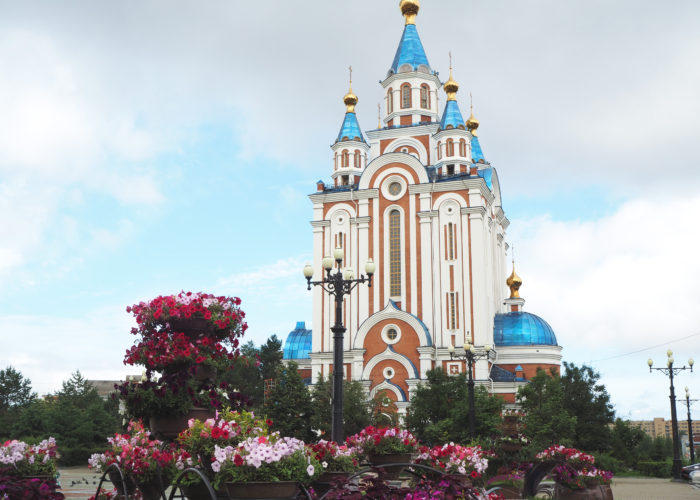 Grado-Khabarovsk Cathedral of the Assumption of the Mother of God

This Cathedral, a staple of city tours, is still a new church built in the 2000s. The bright blue pointed roof is very impressive. You can also tour the building, but women should bring a scarf!
Data：Grado-Khabarovsk Cathedral of the Assumption of the Mother of God
Address/ 1, Khabarovsk, Khabarovsk Krai, 680000
TEL/ 4212314602

From the catherdral to the hotel
7min. by taxi

Check- out the hotel and proceed to the airport
30min. by taxi

From Khabarovsk Airport to Vladivostok airport

Synonymous with Russian souvenirs！ You can buy it at the airport or anywhere in the tourist area. The design differs depending on the area and workshop, and you can enjoy it just by looking.

Russia is a multi-ethnic country, so there are many Caucasian restaurants. Georgian food is especially popular. There are many shops where you can enjoy Khachapuri, stew, and Georgian wine, so be sure to check it out!

The Russian popular restaurant "Stolovaya" is a buffet-style restaurant, and locals visit it like Dennys in Japan. Just take the food that is lined up in the showcase! It's fun to be able to choose various menus at a reasonable price.

A ferris wheel can be found anywhere in the world. Of course, the view from the sky is so nice! There are both Khabarovsk and Vladivostok, so give it a try!

Blini, loved by everyone in Russian cuisine, is a thin pancake like a crepe. Sprinkle with jam and honey, and eat with caviar, salmon roe, and salmon. The round shape is likened to the sun, and it is also known as an indispensable dish on public holidays.