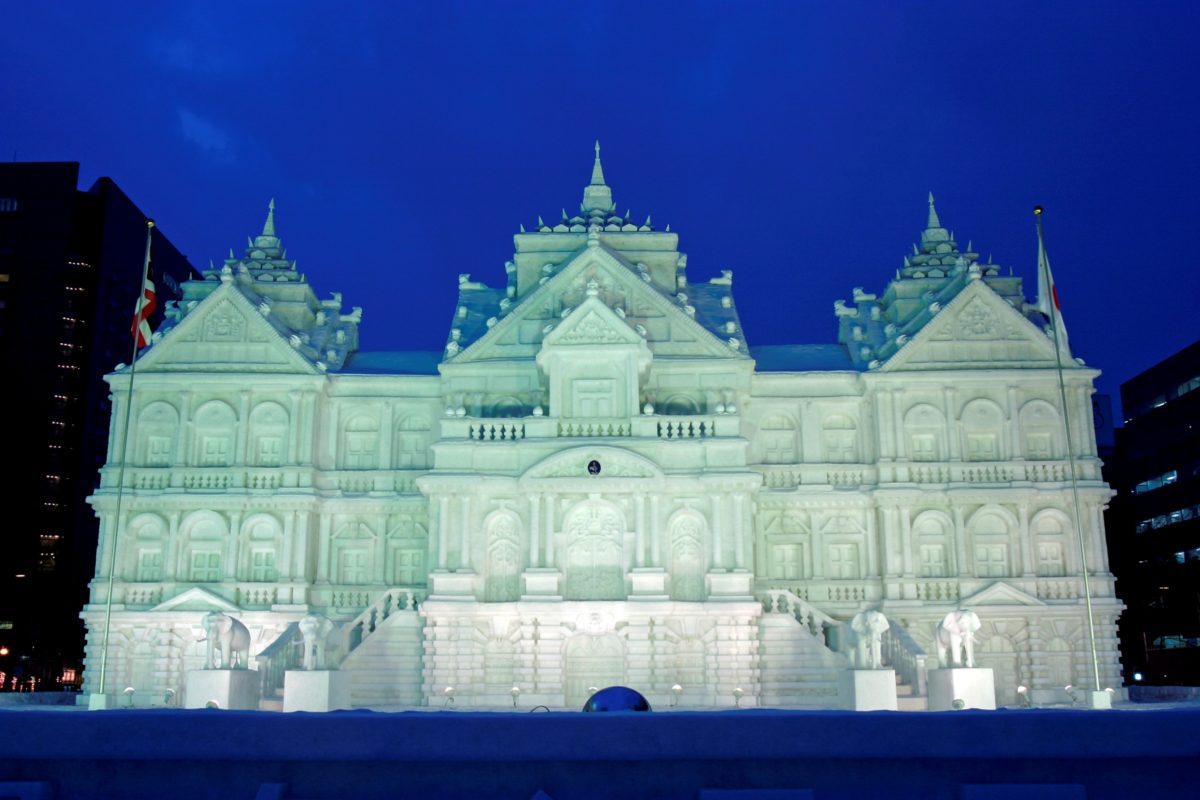 When you think of Sapporo in winter, you definitely think of the Snow Festival! This world-famous winter festival is held at the beginning of February and is a winter tradition. Giant snow sculptures and the beauty of finely detailed ice. The pure white world and the projection mapping with sound and light will surely be a sight to behold! Let’s go to Japan’s winter festival that you should visit at least once in your lifetime!

From Tokyo to Sapporo by Air

Here we are, the Snow Festival!

Proceedto the main street park near the hotel

Family Fun on a Snow Slide

Tsudomu has a lot of exhibits to enjoy inside the museum

How about lunch at the Tsudome venue?

Enjoy the open-air museum of ice at Hyobaku Festival

Beautiful lights up at night
<Day3>

The Sapporo Snow Festival is here! First, we visit the main venue!!

Take a flight from Tokyo to Sapporo New Chitose Airport (about 1.5 hours)

From New Chitose Airport to Sapporo Station
40 min. by train 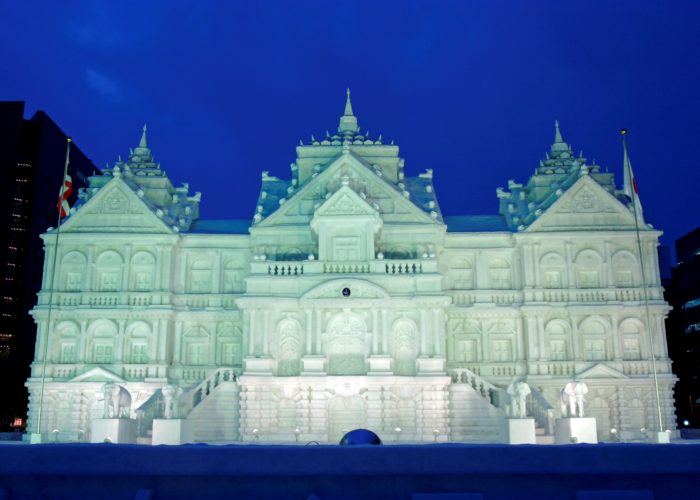 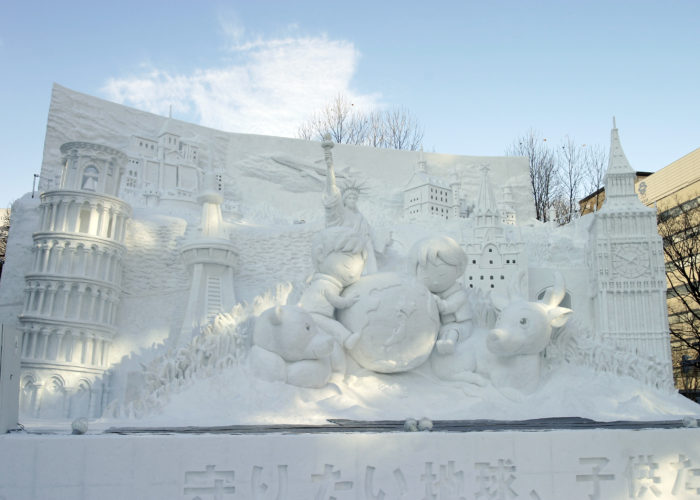 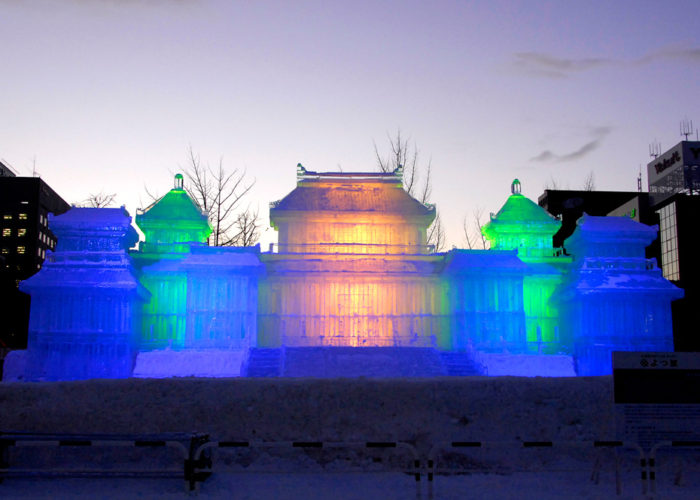 The festival’s main site is located in Odori Park.The Odori Site contains most of the snow and ice sculptures as well as plenty of warm drinks and food choices. The ice sculptures in the Odori Site can be as tall as 15 meters height and as broad as 25 meters. Snow sculptures and ice sculptures large and small line Odori Park for around 1.5 km between 1-chome and 12-chome, and the statues are lit up at night. The 11-chome site is for international participants, where teams from around the world display their works, and you can also watch their works in progress during the festival.
Data： Odori Park
Address/ 1-12 Odori nishi, Chuo-ku, Sapporo, Hokkaido 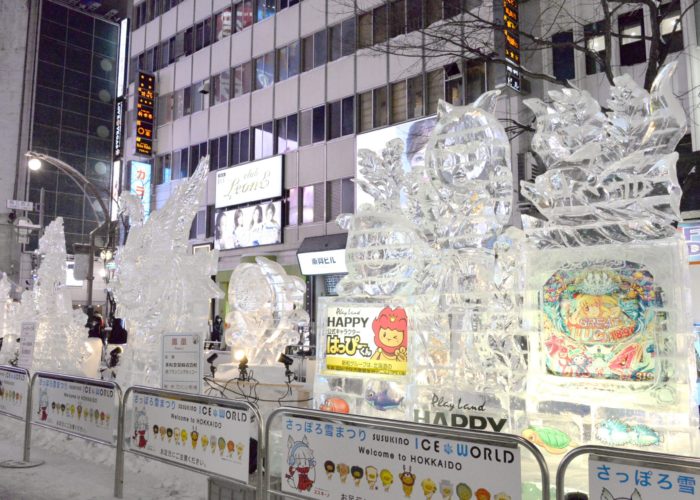 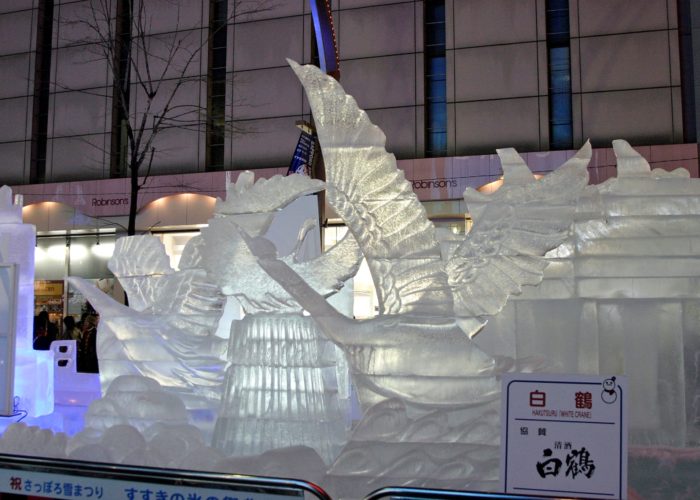 Under the theme of 'Enjoy the Ice', this site offers a fantastic ice sculpture show and the Ice The site will expand in 2016. Under the theme of “Enjoy the Ice,” this site features 60 magical ice sculpture installations from the ice carving contest and other works. It’s also where the International Snow Sculpture Contest began in 1974, and Sapporo’s sister cities, Portland, Oregon; Munich Germany; Shenyang, China; Novosibirsk, Russia; and Daejeon, South Korea, have been consistent participants. You can also visit the plaza called “Fureai Hiroba” to touch or ride the ice sculptures or take photos in the Illumination Street. It is a ten-minute walk, or one subway stop south of Odori.
Data： Susukino Site
Address/ Minami 4jo- Minami 7jo, Chuo-ku, Sapporo, Hokkaido 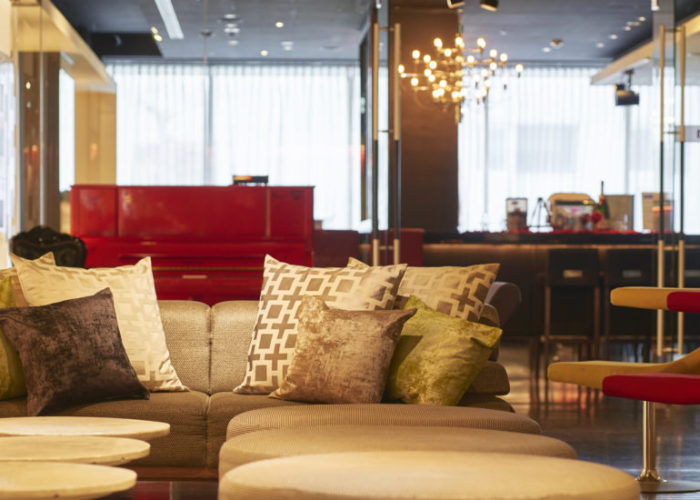 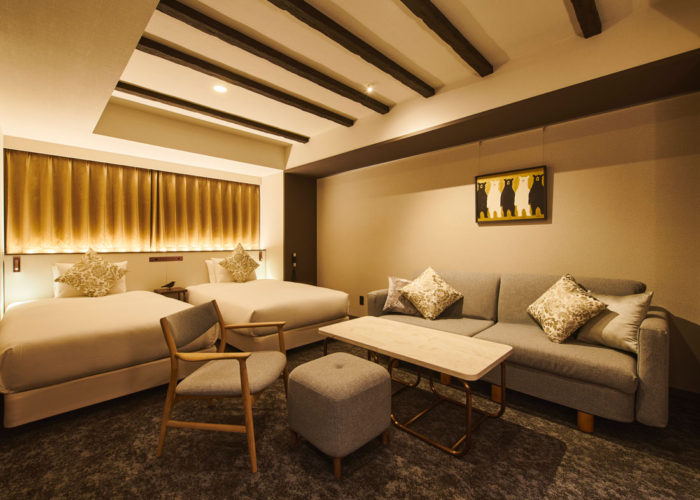 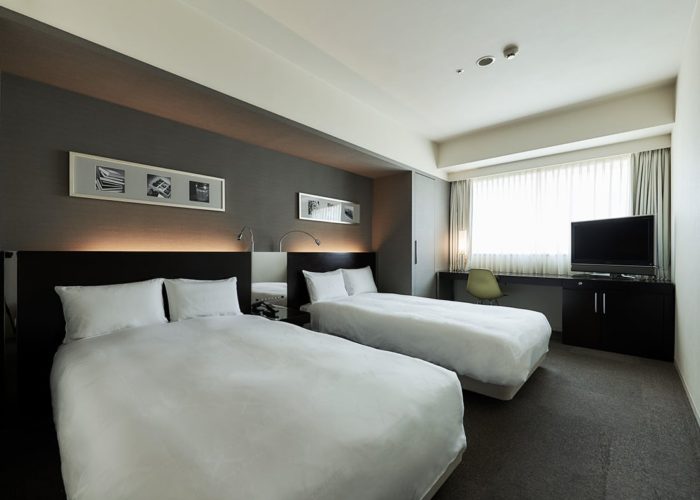 A 5-minute walk from Sapporo Station and Odori Station. It is a convenient location for sightseeing. The breakfast buffet offers a wide variety of dishes, including vegetables, Western dishes, Hokkaido's standard dishes, local food, and Japanese dishes. On the top floor of the hotel, there is a large bath with a view, where you can relax.
Data：Cross Hotel Sapporo
Address/2-23 Kita 2 jo-nishi, Chuo-ku, Sapporo, Hokkaido 060-0002
TEL/011-272-0010

In the morning, visit the Sapporo Snow Festival "Tsudome Venue".
There are a lot of contents that families can enjoy.
In the evening, go to Lake Shikotsu.
Enjoy the beautiful illumination!

From the hotel to Tsudome venue
Subway 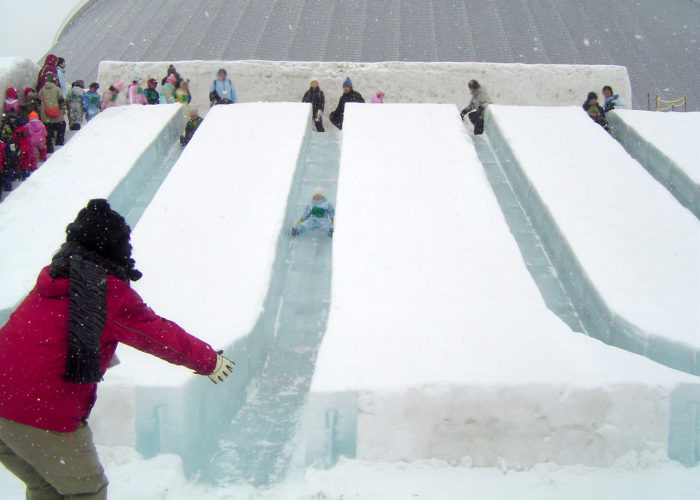 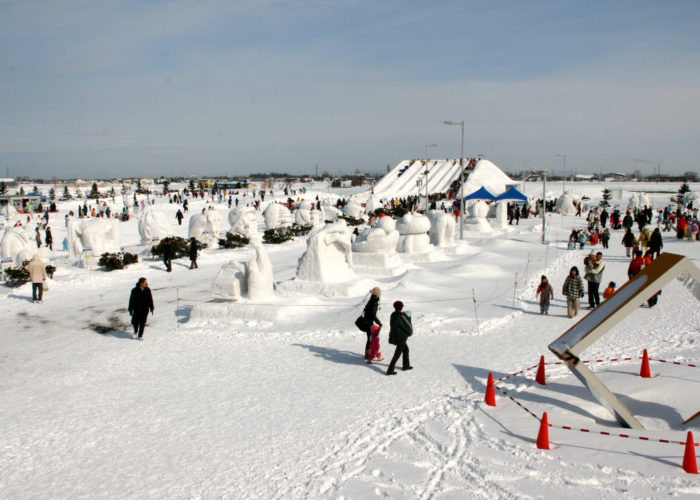 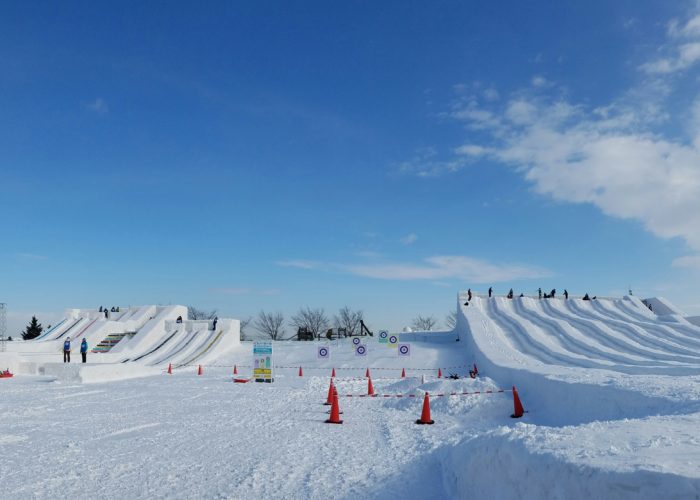 Tsudome is the second largest site of the Sapporo Snow Festival. This site is filled with several snow and ice attractions, including a 100-meter long “tube rider” snow slide and a snow rafting area where people of all ages can ride on a raft towed by a snowmobile. There is also an 80-meter-long snow zip-line that whisks you above the site at a height of about six meters. New for this year is a snow slider (for children ages 2 to 6), in which children can kick the ground to propel themselves forward. In addition, a family lane will be added to the ice slide for two riders at the same time. Also, check out the snow golf park, a first this year, or relax at the Snow Festival Ice Café for a drink served in a glass made of ice (only open Saturday, Sunday and the national holiday; admission fee required; comes with drink).a Inside the dome, there are plenty of attractions for children and you can take a break or have refreshments in the spacious rest area. Sculpture Contest. It's a place where you can really enjoy the wonders of Hokkaido in winter.
Data：Tsu Dome Site
Address/885-1 Sakaecho, Higashi-ku, Sapporo, Hokkaido 007-0852
TEL/ 011-784-2106

From Tsudomu Venue to Lake Shikotsu
50 min. by train 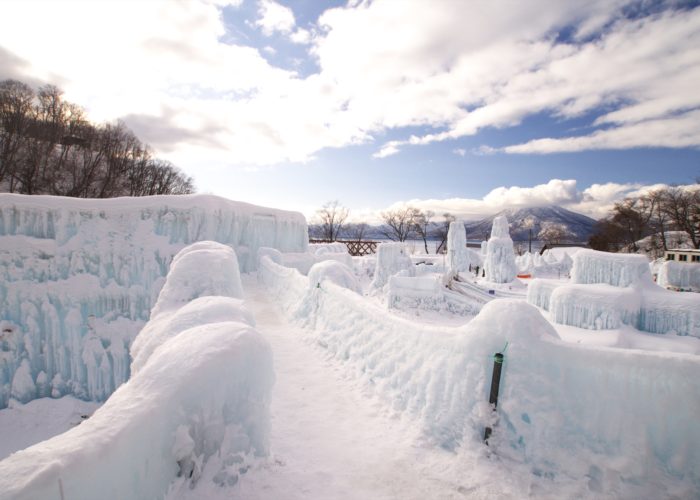 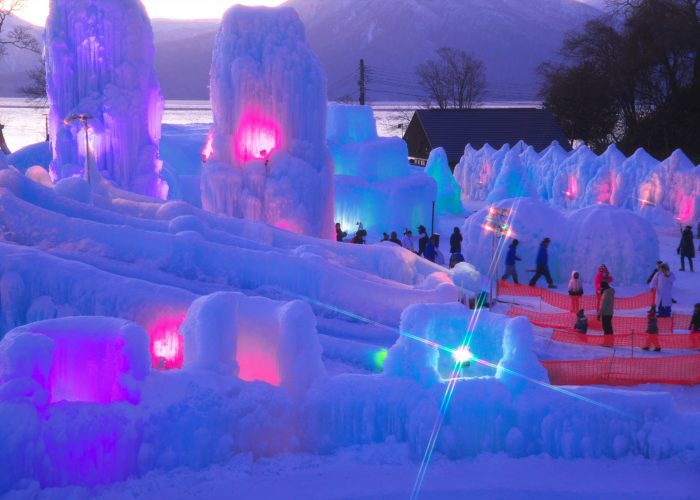 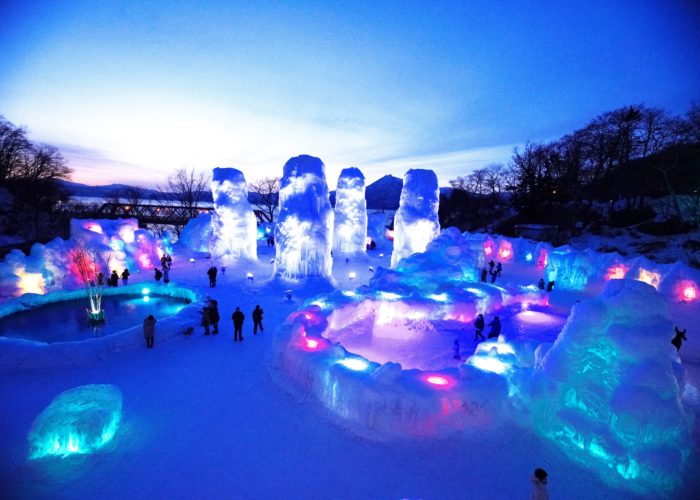 Lake Shikotsu is a caldera lake formed by the accumulation of water in the depression created by the eruption of Lake Shikotsu about 40,000 years ago. The origin of the name is said to be "Shi Kot", which means "big depression" in the Ainu language, and it has been a valuable water source for Chitose since ancient times. It is a long Mayu-shaped lake with a major axis of 13km and a minor axis of 5km, with a circumference of about 40km, a maximum depth of about 360m, and an average depth of about 265m. It is an antifreeze lake. The transparency is extremely high due to the low nutrient content in the water and the low generation of plankton, and the water quality has been evaluated as the best in Japan for 11 consecutive years until FY2018. The clear water of Lake Shikotsu, which boasts this transparency and water quality, emits a blue glow called "Lake Shikotsu Blue" when illuminated by light. The pure water of Lake Shikotsu also enriches the surrounding nature. Nurturing beautiful and magnificent nature such as Lake Okotanpe, Moss Cave, Mt. Fuppushi, Mt. Eniwa, and Mt. Will do it. At the Hyobaku Matsuri (Ice Fall Festival), ice sculptures of various sizes, frozen by spraying water from Lake Shikotsu, glow with the blue color of Lake Shikotsu during the daytime and are illuminated by colorful lights at night, inviting visitors into a fantastic world.
Data：Lake Shikotsu Hyobaku Festival
Address/ Shikotsuko-onsen Chitose, Hokkaido 066-0281

From Lake Shikotsu to the hotel

Depart from the hotel
Enjoy the atmosphere of the Snow Festival during the day and go sightseeing in Sapporo.

From the hotel to the Clock Tower
3 min. by walk 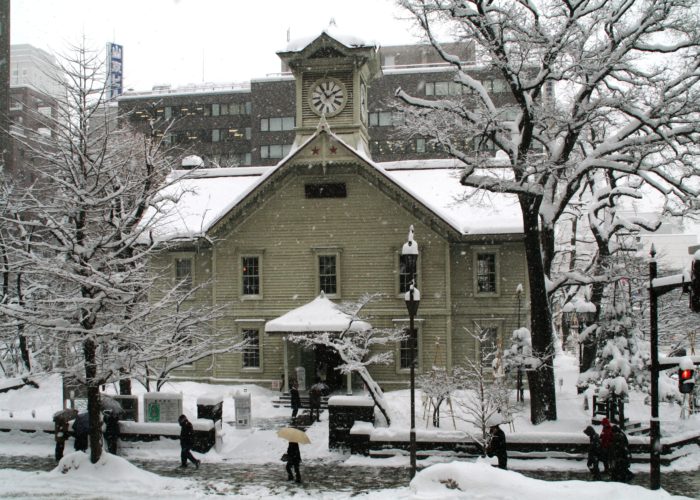 It was built based on Dr. Clark's concept as a facility of Sapporo Agricultural College, the predecessor of Hokkaido University. The two-story building with its impressive red roof and white walls has exhibition rooms on the first floor and a hall on the second floor. A manual clock tower that is screwed up twice a week. There is an identical clock tower on display in the museum, so you can see how it works up close! It's also beautiful when lit up.
Data：Clock Tower
Address/2 chome, Kita1jo-nishi, Chuo-ku, Sapporo 060-0001
TEL/ 011-231-0838

From the Clock tower to Akarenga
7min. by walk 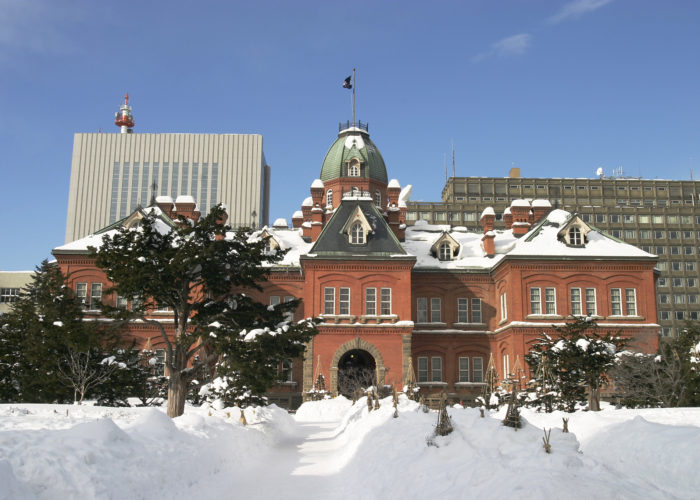 This American-style neo-baroque building, built in 1888, served as the main government building of the Hokkaido Government for 80 years until the new government building was built. Not only are there materials on display that tell you about the history of Hokkaido, but you'll also feel as if you've gone back in time with the now precious warped glass from the Meiji era!
Data：Akarenga (Red block wall)
Address/ 6chome, Kita3jo-nishi,Chuo-ku, Sapporo Hokkaido060-8588
TEL/ 011-231-4111 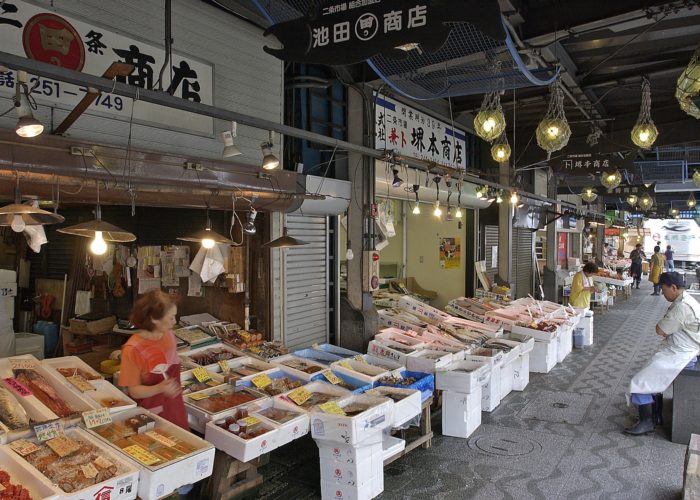 The market was originally established when fishermen from Ishikari beach started selling fresh fish, but gradually grocery stores and Izakaya started to gather here and the market took on its current form. At Nijo Market, which is also known as the kitchen of Sapporo people, you can enjoy Hokkaido's delicious seafood from the morning. In addition to seafood such as crabs and shrimps, you can also buy seasonal vegetables, dried foods, and other souvenirs!
Data：Nijo Market
Address/ 1 chome, Minami 3 jo-higashi, Chuo-ku, Sapporo, Hokkaido 060-0052
TEL/ 011-222-5308 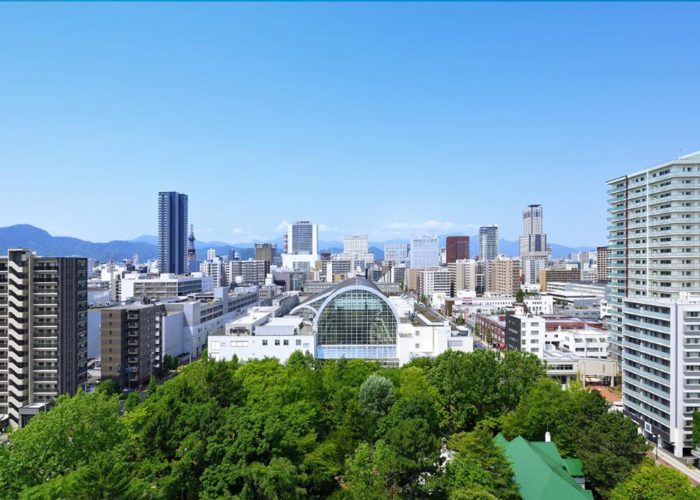 This commercial facility stands on the former site of the first beer factory built by the Japanese. The atrium, which looks like a large greenhouse, has an atrium that extends from the basement to the fourth floor, creating a pleasant space filled with sunlight. The building is divided into seven main areas where you can enjoy shopping while visiting the outdoor stores, general merchandise stores, interior stores and cafes that line the atrium. In the chimney plaza, there is the Sapporo Kaitakushi Brewery and Brothel, where you can drink freshly brewed beer for 250 yen, which recreates the flavor of the original factory.
Data：Sapporo Factory
Address/ 4 chome, Kita 2 jo- higashi, Chuo-ku, Sapporo 060-0032
TEL/ 011-207-5000

/1.3km
From Sapporo Station to Otaru Station
33 min. by train 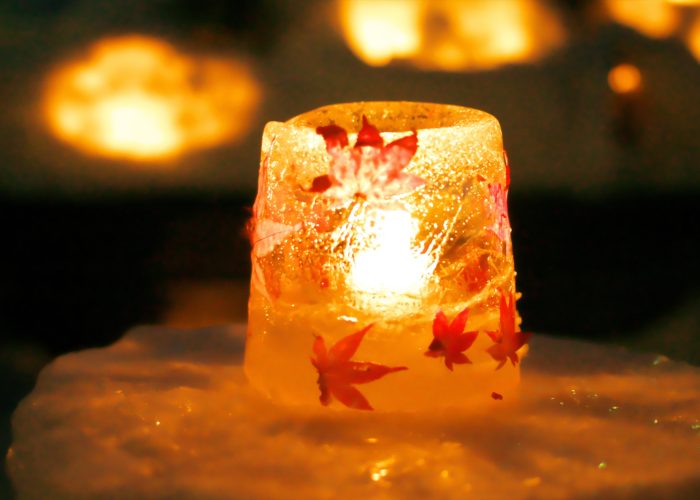 It is the 23rd year since Otaru Snow Light Path began in 1999. This event now enjoys more than 500,000 visitors during the period, but every organizer says respectively that the scale and the number of visitors are not the matters to boast. Their fundamental idea for this festival is consistent. They would like the people visiting the festival to feel easy, to think about things leisurely in the glow of the candlelight, and to have time to reflect on themselves forgetting a little of their bothersome daily life in a rapidly changing society. They hope this festival will continue as a spiritual event rather than a commercially oriented festival. Otaru Snow Light Path remains as it has been so long as there are the unchanged “thoughts of people”, even though times change.
Data：Otaru Snow Light Path Festival
TEL/ 0134-32-4111 (ext.267) 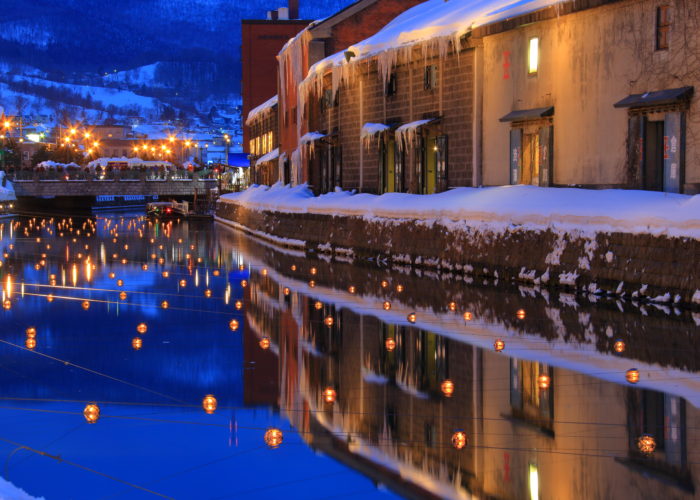 The Otaru Canal that played an important role in the history of Hokkaido’s development is now one of the most popular tourist attractions of Otaru. Floating on the freezing surface of the canal is the wavering light of candles in the glass floats that are the same product once used for herring fishing. Handmade snow and ice art objects along the promenade, “Couples’ Sanctuary”, and “Heart Monument” on the Asakusabashi bridge set off the quaint atmosphere of the canal area along with the old stone and brick warehouses. The Canal site represents all about Otaru Snow Light Path.
Data：Otaru Canal
Address/ Minatomachi, Otaru, Hokkaido 047-0007 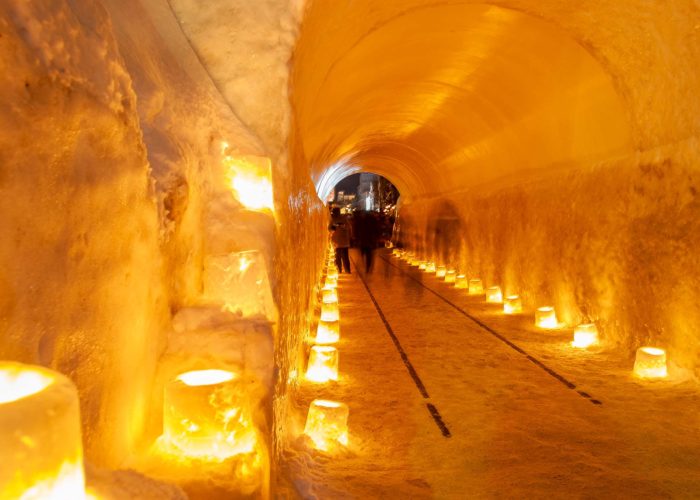 It was in 1880 when the third oldest railway in Japan was laid between Temiya and Horonai.The train would run carrying coals, and the dream of development of Hokkaido. The service of the line was terminated finishing its role in 1985, but the track remains as a precious relic of railway.The dead track having a snow tunnel, and rimmed with the candlelight seems to stretch endlessly. The rumbling sound of train is not here anymore, and there is such quietness as you can hear even your footsteps instead. This site can be a wonderful spot for you to reflect on yourself.
Data：Otaru Snow Light Path Festival -Former Temiya Railway Line Site-
Return from Otaru to the hotel
From Otaru Station to Sapporo Station
33 min. by train

From Sapporo Station to the hotel
6 min. walk

Enjoy Sapporo until your flight time!

Check out of hotel

From Sapporo Station to New Chitose Airport
40 minutes by train