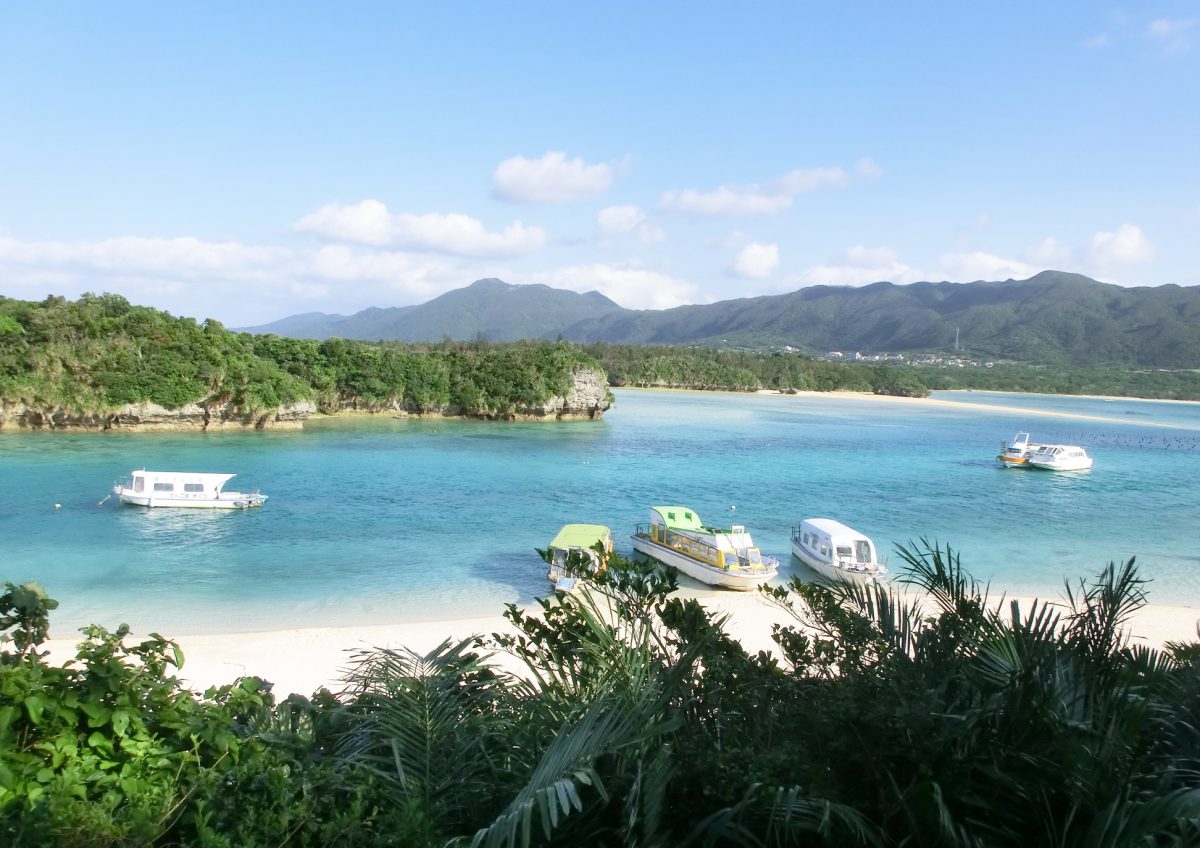 The Yaeyama Islands that include Ishigaki, Taketomi, Kohama, Kuroshima, Hatoma, Aragusuku, Iriomote, Yubu, and Yonaguni islands lie at the very southern end of the Japanese archipelago, about 400 kilometers from Okinawa Main Island. It is widely known for their natural beauty, crystal clear ocean, nostalgic old Okinawa landscape. To be based on Ishigaki Island, let’s go to Taketomi island or Iriomote island by the ship.

Driving on Ishigaki Island! A magnificent landscape from Tamatorizaki Observatory

Snorkeling with Golden fishes at the starsand beach
<Day3>

Sightseeing on Taketomi Island by a buffalo carriage

Seeing the crystal clear ocean from the West Pier(Nishi Sanbashi)

Kondoi Beach, shallow for some distance from the shore

Taking a walk around the tower of Nagomi and the village

Let’s take a road trip on the Ishigaki Island

Arriving at the Ishigaki Airport by plane 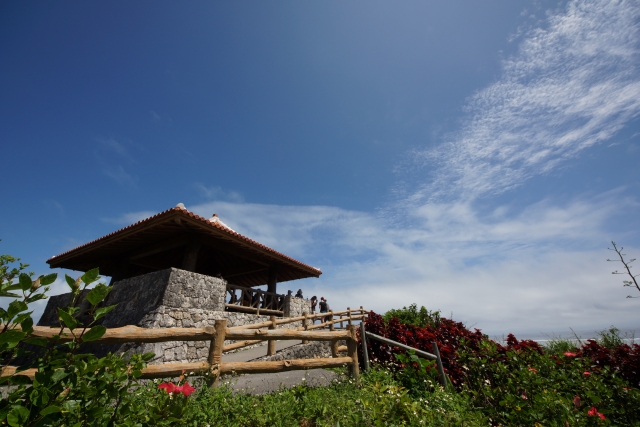 It is located on the north east coast of Ishigaki Island. The observatory is above the parking lot and the spectacular view of Hirakubo peninsula is stretched out to north in front. You can observe East China Sea and the Pacific Ocean.
Data：Tamatoizaki Observatory
Address/ 〒907-0332 Ibaruma, Ishigaki-city, Okinawa
TEL/ 0980-82-2809（Ishigaki City Tourism Exchange Association）

From the observatory to Ibaruma Sabichi Cave
6 min. by car 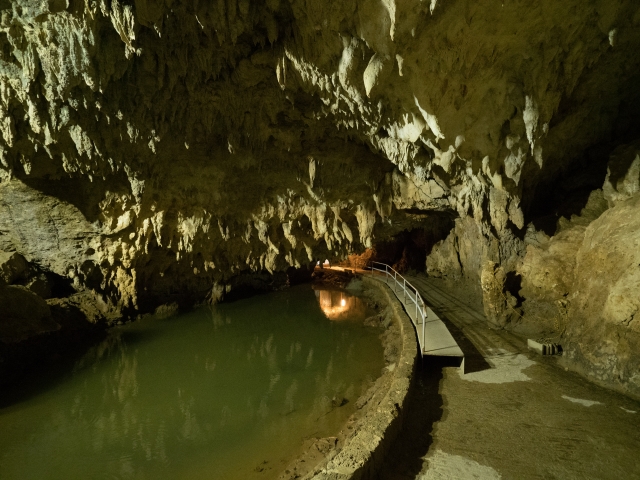 The only limestone cave in Japan that allows you to reach the sea. As you pass through the cave while enjoying the mystery and mystery of the limestone cave, the beautiful emerald green sea spreads out in front of you. It is a limestone cave that is said to have been born about 370,000 years ago when Ishigaki Island was formed by the uplift of the seabed.
Data：Ibaruma Sabichi Cave
Address/〒907-0332 185-44, Ibaruma, Ishigaki-city, Okinawa
TEL/ 0980-89-2121

From the cave to Cape Hirakubosaki
17 min. by car 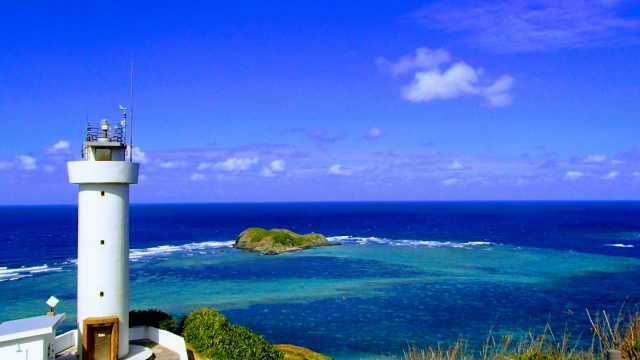 Right at the very top of the island is this lighthouse that offers some of the best views of the ocean from the island. Surrounded by coral reefs, the sea, which shows various colors, is a magnificent view. From the small hill where the lighthouse is located, you can see the Pacific Ocean to the east and the East China Sea to the west.
Data：HIrakubosaki Lighthouse
Address/ 〒907-0331 234-50, Hirakubo, Ishigaki-city, Okinawa

From the lighthouse to Fukido River
30 min. by car 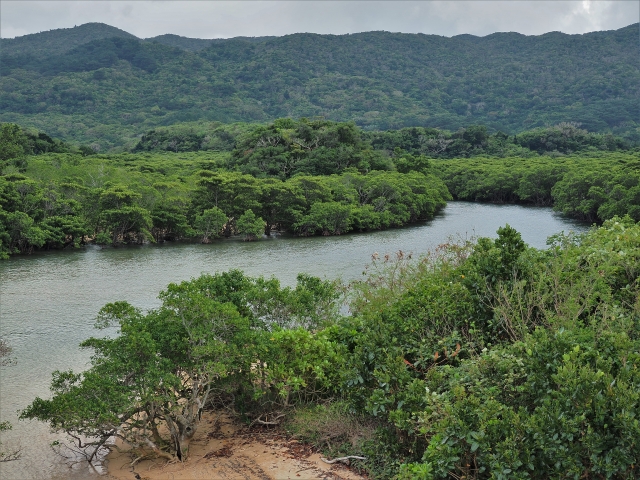 The mangroves that spread around the Fukido River are home to Yaeyama hirugi, bruguiera gymnorhiza, and candelia obovata, which are designated as national natural monuments. At low tide, the water drains, you can walk in the mangrove, and you can meet creatures such as crabs.
Data：Fukido River Mangrove
Address/〒907-0333 Nosoko, Ishigaki-city, Okinawa

From the river to Palm Glove
11 min. by car 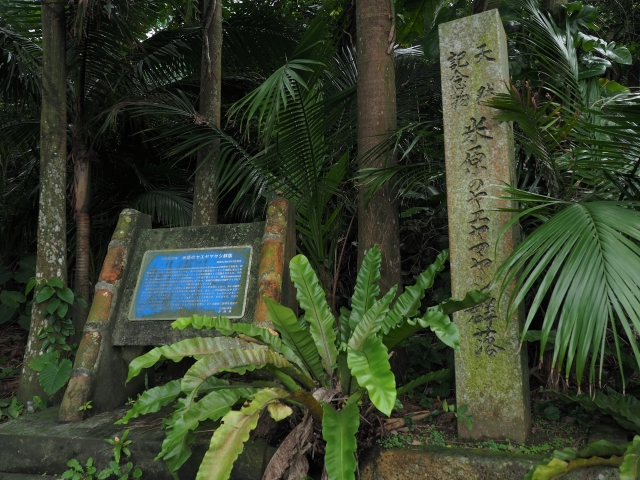 Maibara's Yaeyama palm, which is designated as a national natural monument, is a plant of the palm family that grows only on Ishigaki Island and Iriomote Island in the Yaeyama Islands. The promenade takes about 10 minutes. There are shops for tropical juices and souvenirs, and the popular "sugar cane juice" is so fresh and dericious!
Data：Yaeyama Pal Grove
Address/ 〒907-0451 546, Fukai, Ishigaki, Okinawa

From Parm Grove to Kabira Bay
15 min. min by car 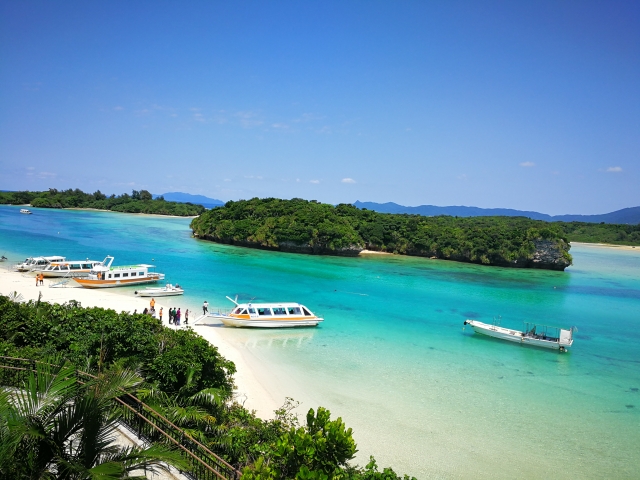 Kabira Bay is a bay located on Ishigaki Island. With its numerous coral reefs and tropical fish it was given a 3-star rating by the Michelin Green Guide. The various colors change from blue to green in the sunlightIt is also known as the place where the world’s first black pearl was cultivated.
Unfortunately, you cannot swim in Kabira Bay due to intense currents, but you can use a glass-bottom boat to see underwater. From the glass bottom you can watch the beautiful fish and coral.

From Kabira Bay to Oganzaki
14 min. by car 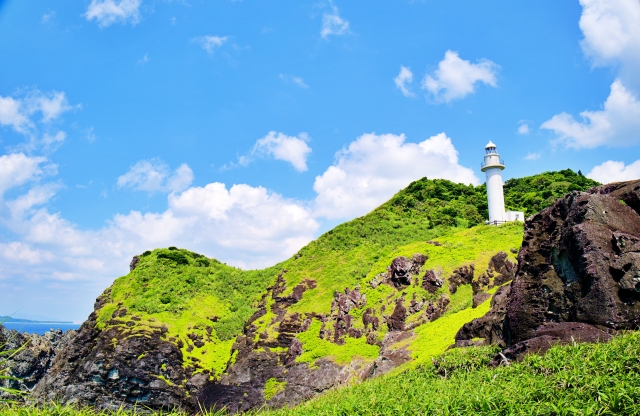 Oganzaki is a cape on the Yarabu Peninsula in the western part of Ishigaki Island. Since it is a cape on the peninsula, you can enjoy a spectacular view on all sides. Especially the evening sunset is a so beautiful. You can enjoy the sunset over the sea.
Data：Oganzaki
Address/ 〒907-0453 Sakieda, Ishigaki-city, Okinawa 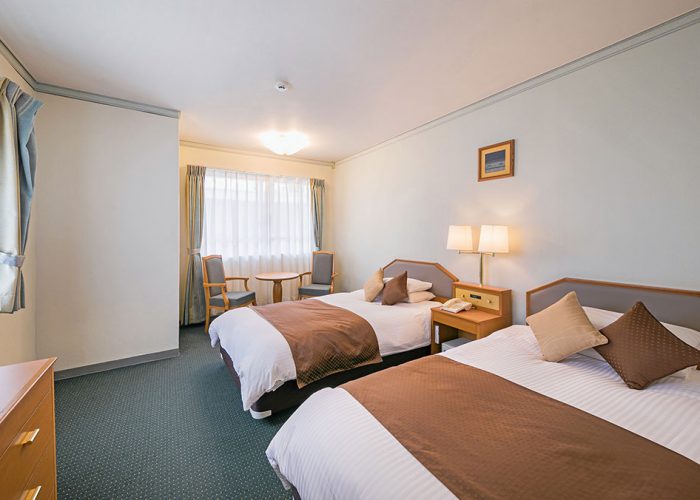 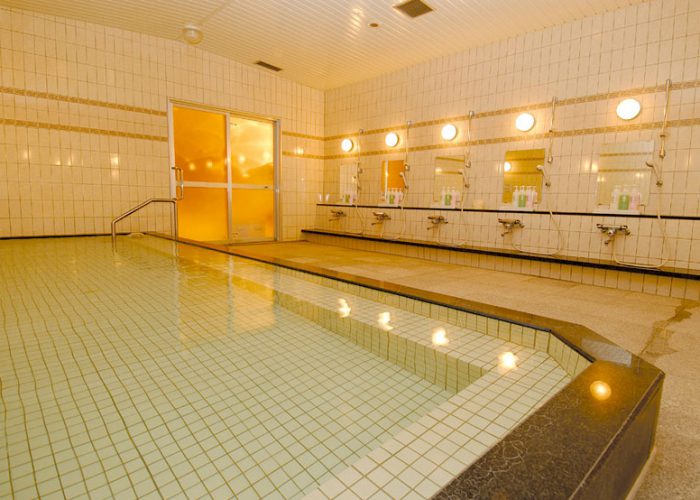 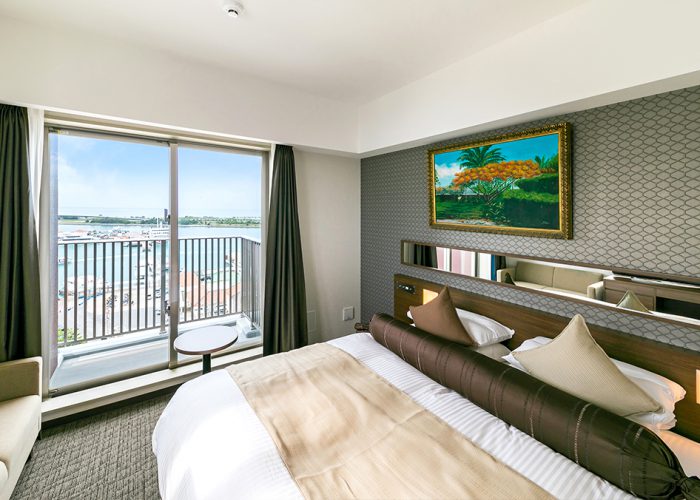 At the gateway to the Yaeyama Islands, Hotel Miyahara is in the ideal location for sightseeing from Ishigaki Island to the outlying islands.
Data：Hotel Miyahara
Address/ 〒907-0012 4-9 Misaki-cho, Ishigaki-shi, Okinawa
TEL/ 0980-82-6111

It takes 40 minutes by Shuttle boat from Ishigaki to Iriomote. Rent a car at the Uehara Port. 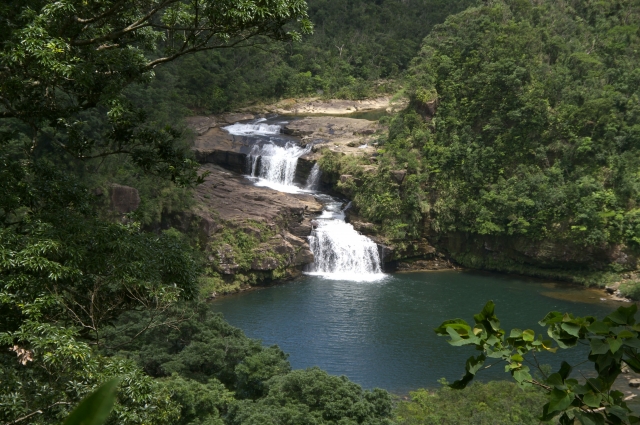 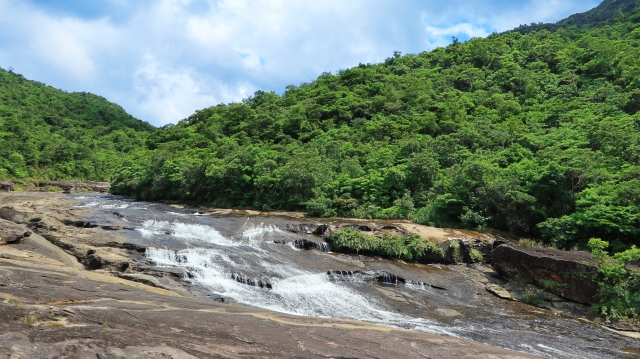 Suptropical forest make up the majority in Iriomote island. This is Iriomote jungle cruise that you can easily enter in such a place.Further down from the Urauchi River's upstream boat landing spot, a well-maintained path leads to the heart of Iriomote's Jungle. Emerging in the dense jungle are the Mariyudu Waterfalls, chosen as one to the top 100 waterfalls in Japan, and the Kanbire Waterfalls, the most sacred spot on Iriomote island carrying the name of 'seat for the god'.
Data：Urauchi Riveer (Urauchi-gawa)
Address/ 〒907-1541 870-3, Uehara, Taketomi-cho, Yaeyama-gun, Okinawa
TEL/ 0980-85-6154 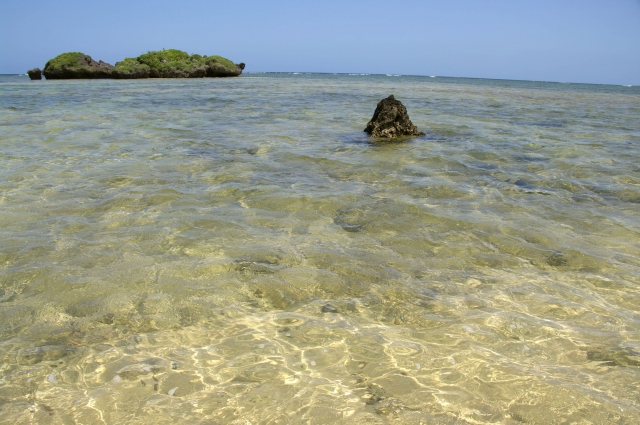 Because star-shaped sand found there, it is called star sand beach. There are many rocks on the seabed, with small fish inhabiting the crevices. You can see many tropical fish. The waves are small and the water is warm there, so it is perfect for swimming or snorkeling.
Data：Starsand Beach
Address / 〒907-1541 Uehara, Taketomi-cho, Yaeyama-gun, Okinawa

From the beach to the port
8 min. by car

Go to Taketomi Island where has nostalgic landscape!

Let’s go to Taketomi Island, it is takes only 10 minutes by the shuttle boat 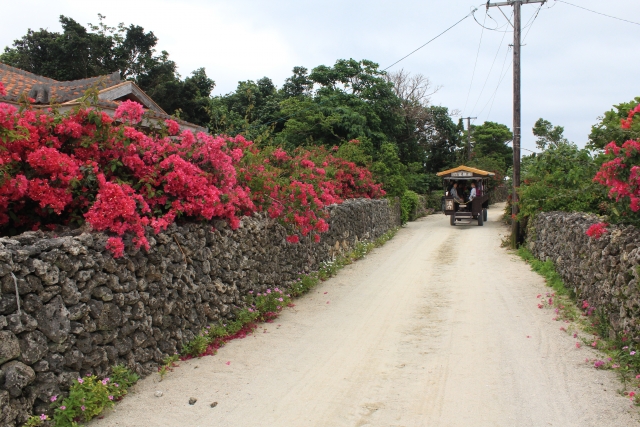 Sightseeing by a buffalo carriage

Limestone walls decorated with hibiscus and bougainvillea, wooden houses with their roofs made from traditional red tiles. It is a nostalgic landscape. The townscape of Taketomi Island, which maintains its traditional appearance, has been designated by the national government as a preservation district for its important traditional buildings. Catch a ride on the water buffalo carriage while listening to songs played on the sanshin by an island guide.
Data：Sightseeing by a buffalo carriage（Nitta Kankou）
Address / 〒907-1101 97 Taketomi, Taketomi-cho, Yaeyama-gun, Okinawa
TEL/  0980-85-2103 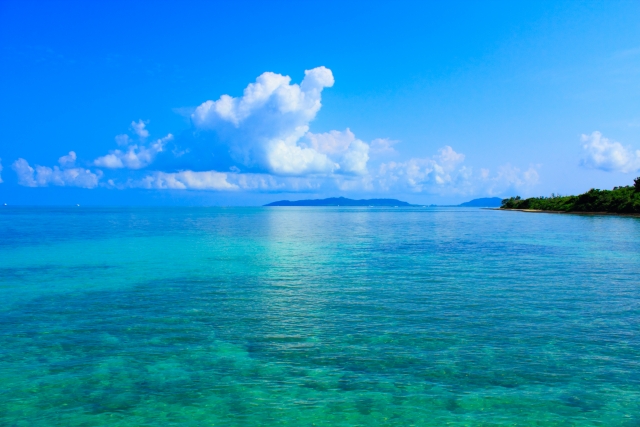 On the west side of the island away from the settlement, there is the Nishi Pier. When standing at the tip of a jetty that stretches straight above the sea shimmering in emerald green, you can view your surrounds as if you are standing on the sea.
Data：Nishisanbashi
Address/ 〒907-1101 207, Taketomi, Taketomi-cho, Yaeyama-gun, Okinawa 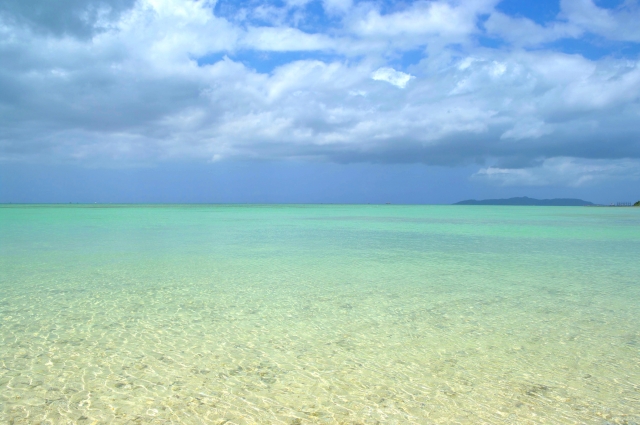 Kondoi Beach, where the crystal clear ocean waters and white sands, has shallow waters, which makes for safe swimming when it comes to families with small children.
At low tide, a lustrous white sandy beach emerges when the ocean pulls away.
You can also relax with many cats which are around there.

From the beach to the another beach
Bicycle 4minutes / 0.75km 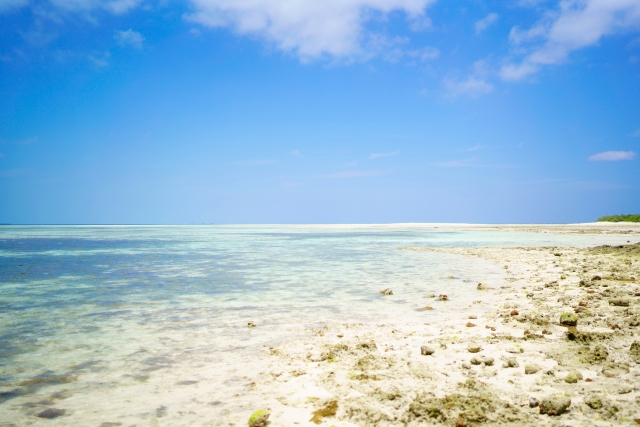 Next to the Kondoi beach, there is Kaiji Beach which is known as “Starsand Beach” because you can find star-shaped sand there. You cannot swim in this beach since Kaiji Beach has moving tide.
Data：Kaiji Beach
Address/ 〒907-1101 Taketomi, Taketomi-cho, Yaeyama-gun, Okinawa

From the beach to Taketomi village
Bicycle 4minutes / 0.75km 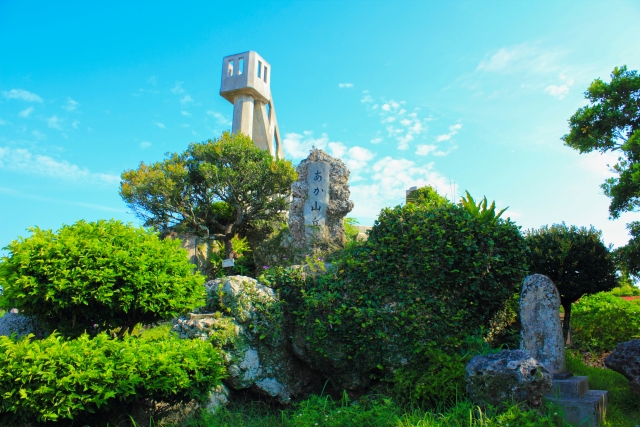 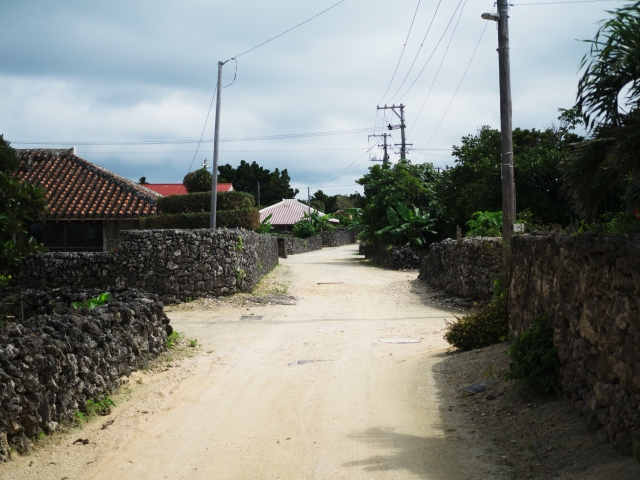 The Nagominoto Tower is a 4.5m tower that stands on a small rocky mountain, Akayama Hill, in the center of the island. Currently, it is no longer possible to climb due to aging, but from the Akayama Observatory opposite, you can overlook the "Taketomi Village" where red-tiled Ryukyu architectural houses are lined up. There are shops and restaurants in the village, so you can enjoy local food and shopping.
Data：Nagomi Tower
Address / 907-1101 Taketomi, Taketomi-cho, Yaeyama-gun, Okinawa

Return the rental cycle and back to Ishigaki Island.

From Ishigaki Port to the airport by bus

Take an evening flight to Haneda 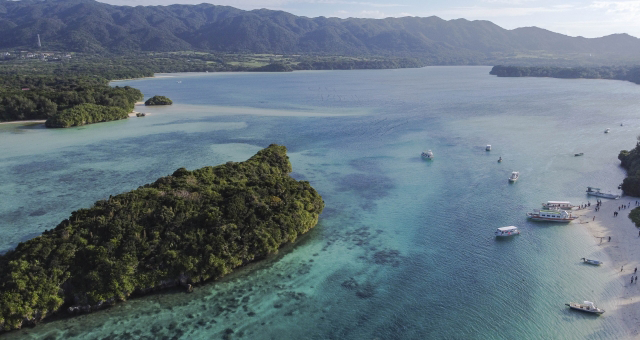 The Ishigaki Island is the gateway to the Yaeyama Islands since ferries to each island leave from Ishigaki Island. There are plenty of restaurants,souvenir shops, and also hotels which is wide range from affordable inns to luxury resort. Ishigaki Island is large enough to drive around in about 3 hours, so you can drive for half a day, but if you want to drive while stopping by, we recommend a one-day drive. 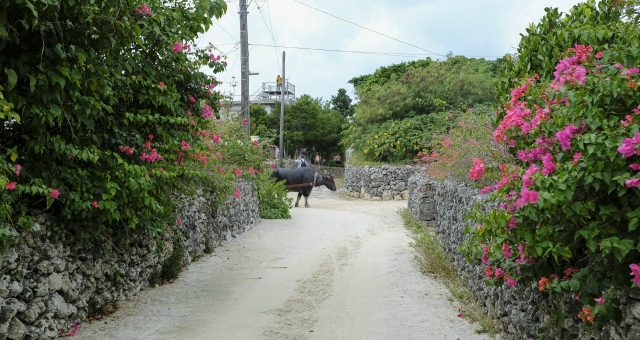 A small island that arrives from Ishigaki Island in just 10 minutes by boat. You can enjoy the nostalgic landscape of Okinawa. The area is about 5.4km2 and the circumference is 9.2km, so it is large enough to ride a bicycle. You can take a leisurely tour of the island on a cow rider, take a leisurely stroll, and enjoy the old-fashioned town with its red tiled roof, stone walls, and white sand roads. 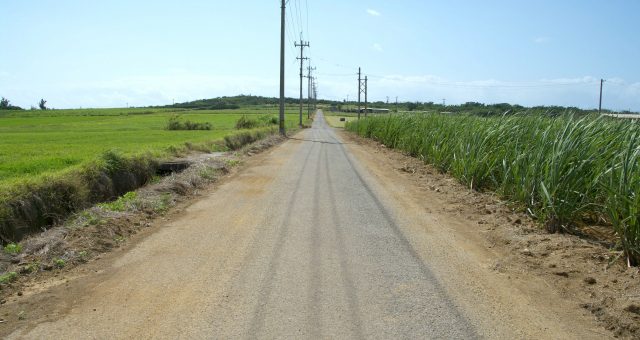 This small island has a wide range of sugar cane fields, a lot of tropical nature such as the beautiful sea and mangroves, and is an island where a famous TV drama was shot. It is located in the center of the Yaeyama Islands between Ishigaki Island and Iriomote Island, and can be reached from Ishigaki Island in about 25 minutes by high-speed boat. 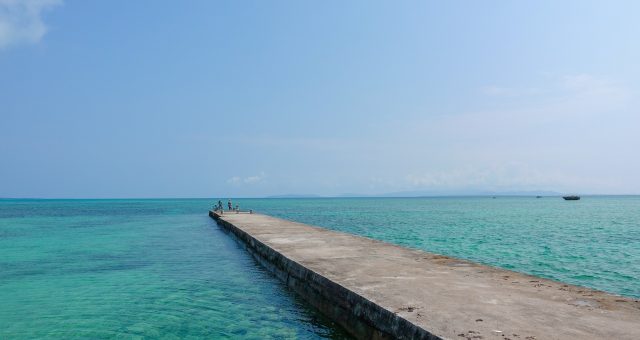 This island is a peaceful island with no traffic lights or police boxes, and the number of cows is more than 10 times that of the population.
You can cycle around in about an hour since it's a flat island with almost no slopes. Beautiful sea, such as "Iko Pier" where you can feel like standing on the sea, "Nishihama" which is a beautiful natural beach shining in emerald green, and "Okimoto Coast" where you can see beautiful coral reefs and tropical fish with outstanding transparency, is very attractive. 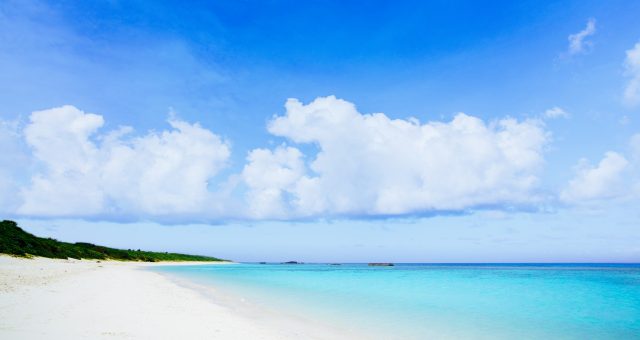 Hateruma Island is the southernmost island in Japan. There are no buses or traffic lights on the island, and you can spend a relaxing time with sugar cane fields, nature-filled beaches and old-fashioned houses. It is also called "Star Island" because you can see the perfect stars, and you can observe the Southern Cross, which you cannot see in Honshu. The sea, which boasts outstanding beauty in the Yaeyama Islands, has a unique blue color called "Hateruma Blue". You may encounter sea turtles as well as many corals and fish in the sea. 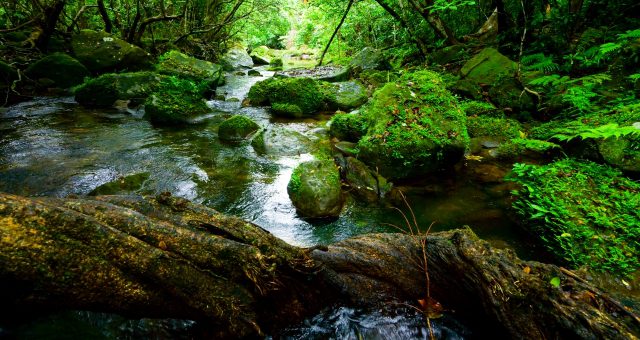 Iriomote Island where many rate animals and plants remain in a subtropical jungle is 2nd largest in OkinawaWe need to use boats and kayaks to visit sightseeing spots in the inland area since it is covered with virgin forest. Let's take an activity tour such as river rafting, trekking tour, jungle cruise, kayaking, diving, etc. and spend your time playing to the fullest while fully enjoying the charm of nature. 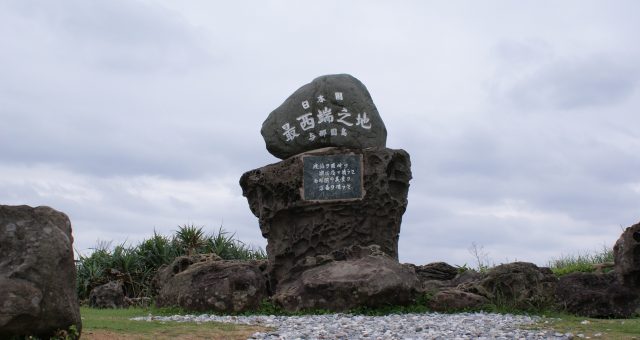 Yonaguni Island is located in the westernmost part of Japan. It is 1,900 km from Tokyo, 509 km from the main island of Okinawa, 127 km from Ishigaki Island, but only 111 km to Taiwan.
It has its own nature, culture and history, such as the cliff coast, mysterious undersea ruins, and the vast ranch where Yonaguni horses are grazing, unlike the other islands of Yaeyama.
It takes about 30 minutes by plane from Ishigaki Island, and a ferry also operates which take 4 hours, but please note that it may be canceled depending on the weather. 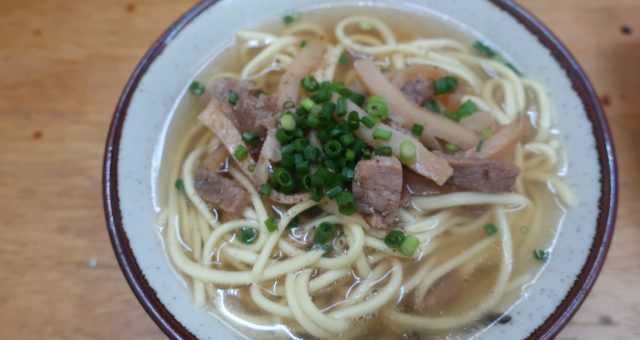 Yaeyama soba (noodle) is one of the standard dishes of Yaeyama. It’s traditionally served with pork, green onions, and fish cake. The broth is made from skipjack tuna, pork bone broth and Konbu (seaweed). The taste is quite mild but you can spice it up local style by sprinkling on some island pepper and adding Awamori-Chili condiment. 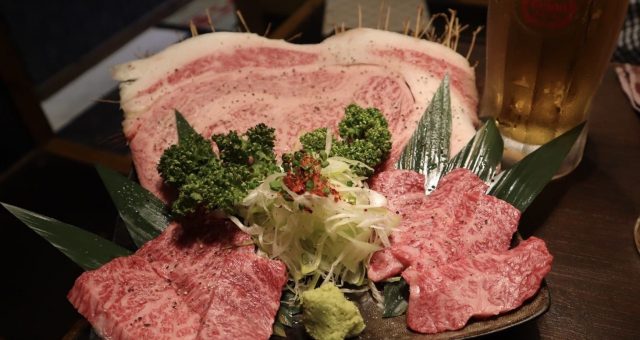 Originally, in Ishigaki and Yaeyama Islands, Japanese Black beef is popular and has become the root of branded beef nationwide. Ishigaki beef has been highly evaluated as a main dish at the summit banquet of the Okinawa Summit held in 2000. I would like you to taste it with steak or grilled meat because it is a great deal, but if you use Ishigaki beef bowl, you can taste Ishigaki beef at a reasonable price. 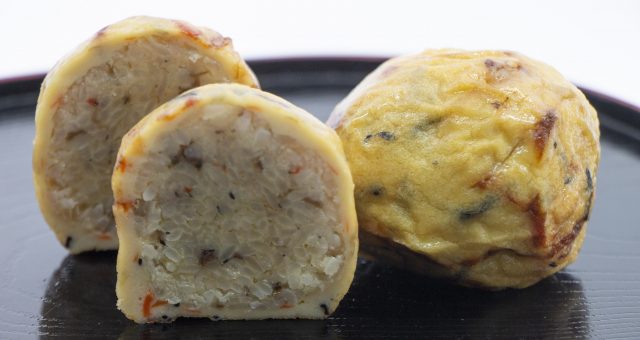