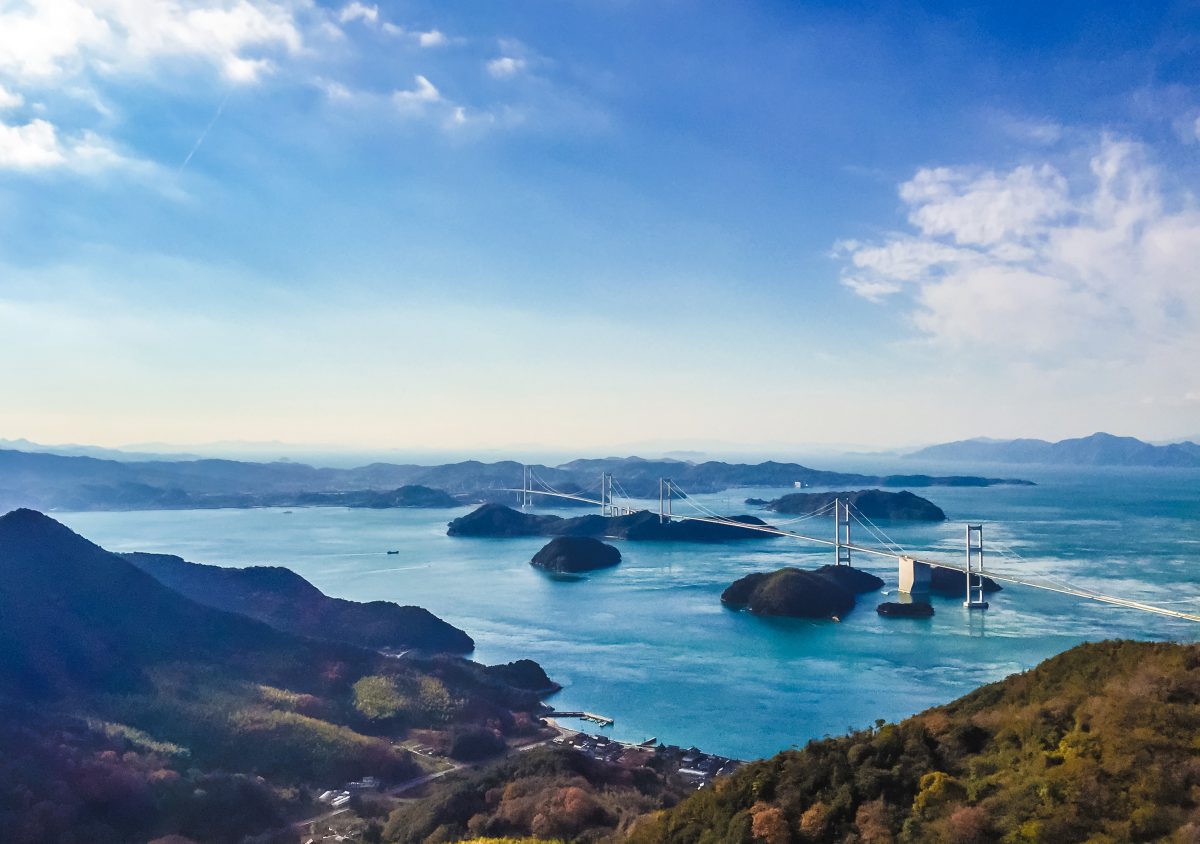 The Shimanami Kaido begins on Honshu in Onomichi city. It then leads across the six islands such as Lemon island, Salt island and Pirates island, before terminating on Shikoku in Imabari City. If you have physical strenghth, you should try to cross the islands by bicycle! Along the way, you definitely enjoy the beautiful scenery of the Seto Inland Sea and the islands’ small towns.

Enjoy the islands of Setouchi on a drive

Encounter a cat on a steep stone staircase!

Lots of narrow roads!! Take a walk in the back alley
<Day2>

What a nice scent of lemon fields!

The arch bridge is so cute!!

The picturesque sea from the Observatory

Rent a car from JR Fukuyama station and head to the historic towns of Tomonoura and Onomichi.

Renta a car and proceed to Tomonoura port.

From fukuyama station to Tomonoura port
30min. by car 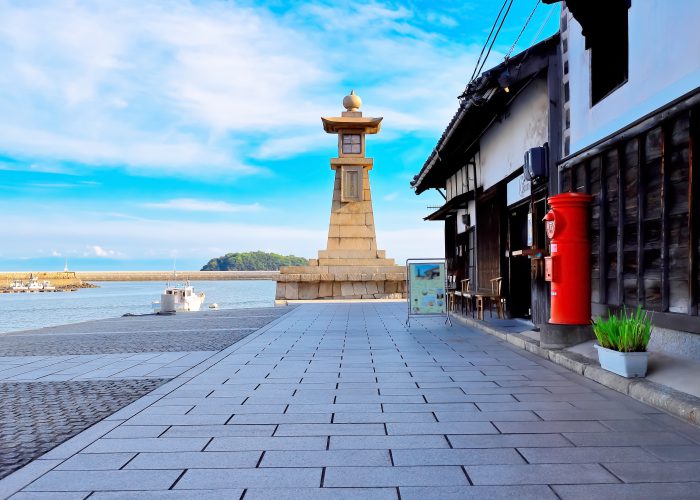 Tomonoura, said to be the model for the Ghibli film Ponyo, is a port town that prospered in the shipping industry. The Tomonoura lantern, which has been lit since 1859, is the symbol of Tomonoura. Museums, souvenir shops, and cafes can be found in the unique streetscape of the port.
Data：Tomonoura port Lighthouse
Address /843-1 Tomo, Tomochou, fukuyama, Hiroshima 〒720-0201

From the port to Onomichi area
50min. by car 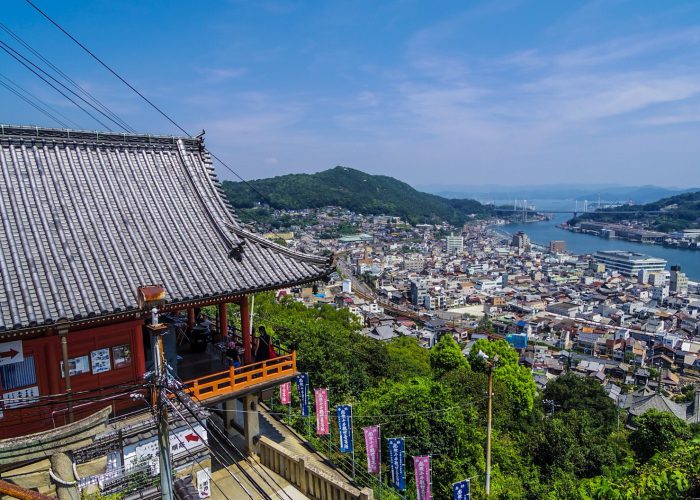 Senkō-ji is the best known and most impressive of Onomichi's temples. Among its features is the kyō-onrō, a bell tower whose bell always rings in the new year – the sound of this bell is registered as one of the '100 soundscapes of Japan'. You can take a cable car ride up.
Data：Senkōji
Address /15-1 Higashitsuchidocho, Onomichi, Hiroshima 〒722-0033
TEL/ 0848-23-2310 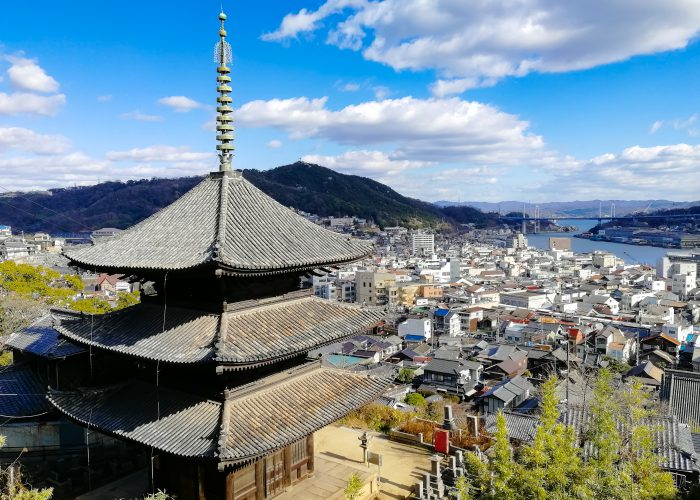 This temple was built in 1367. It has a pagoda called Kaiun Pagoda, an important cultural property, and a group of 500 arhats line the Rakan Hall on the left side of the main hall. Weeping cherry blossoms in the beginning of April and peonies at the end of April are things you should not miss.
Data：Tennneiji
Address /17-29 Higashitsuchidocho, Onomichi, Hiroshima 〒722-0033
TEL/ 0848-22-2078 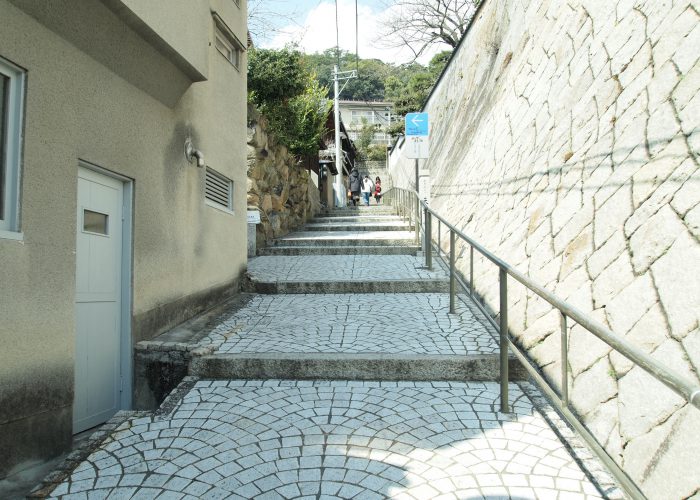 There are high stone walls and wooden fence houses in the middle of the steep stone steps, and you can enjoy the scenery of "THE Onomichi" on the narrow and varied slopes.
Data：
Address /15-1 Higashitsuchidocho, Onomichi, Hiroshim〒722-0033
TEL/ 0848-23-2310

From the slope to the hotel
10min. by car 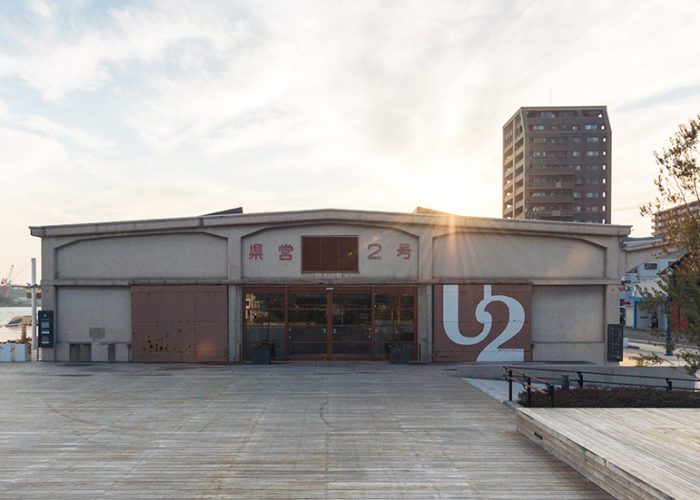 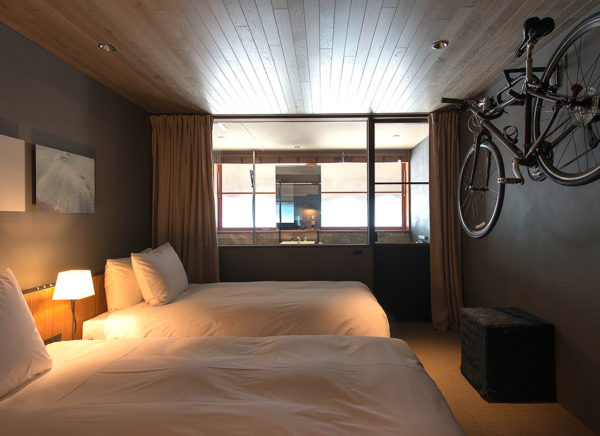 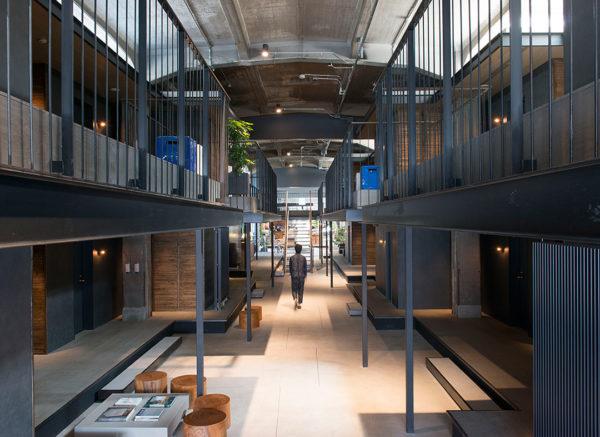 Hotel Cycle is a stone's throw from Onomichi Station along the waterfront. More commonly referred to as Onomichi U2, the property used to be a row of warehouses before they were repurposed to liven up the waterfront. Inside, visitors can find a bicycle shop, dining and shopping options
Data：HOTEL CYCLE
Address /5-11 Nishigocho, Onomichi, Hiroshima 〒722-0037
TEL/ 0848-21-0550

Let’s start for the 61km long Shimanami Kaido! Also pay attention to the bridge that connects the islands.

Now it's time to set out on the Shimanami Highway!
First, we'll cross Mukojima Island to Innoshima Island. 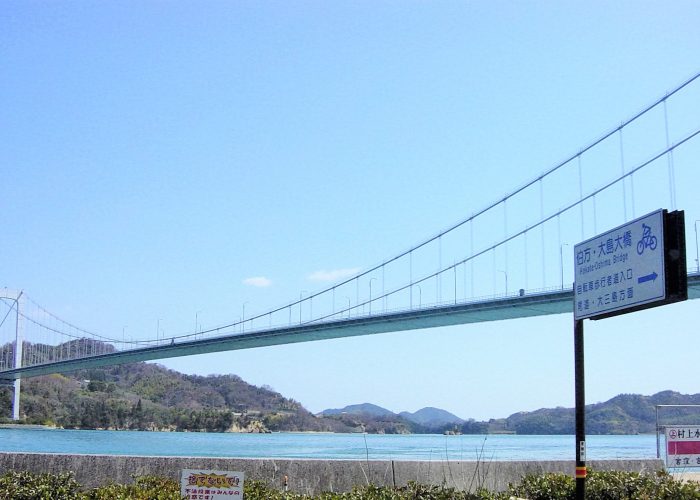 From the parl to Kousanji museum
30min. by car 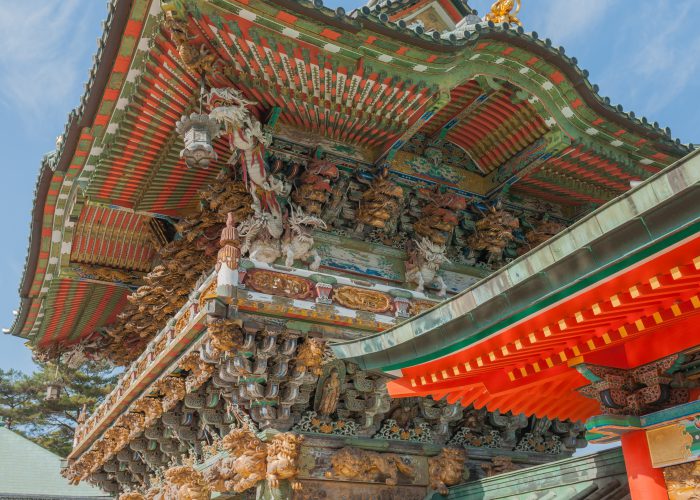 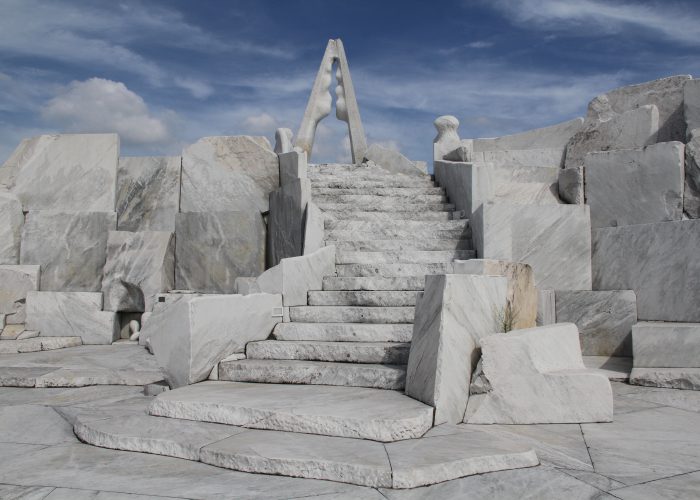 founded in 1936 by the industrialist Kozo Kosanji, and the most popular is the hill of hope. Covering over 5,000㎡ and using around 3,000 tons of Cararra marble, the garden is filled with various monuments both large and small that incorporate the surrounding environment to achieve a remarkable harmony with nature.
Data：Kousanji museum
Address / 553-2 Setodacho Onomichi, Hiroshima 〒722-2411
TEL/ 0845-27-0800

From Kousanji to the beach
10min. by car 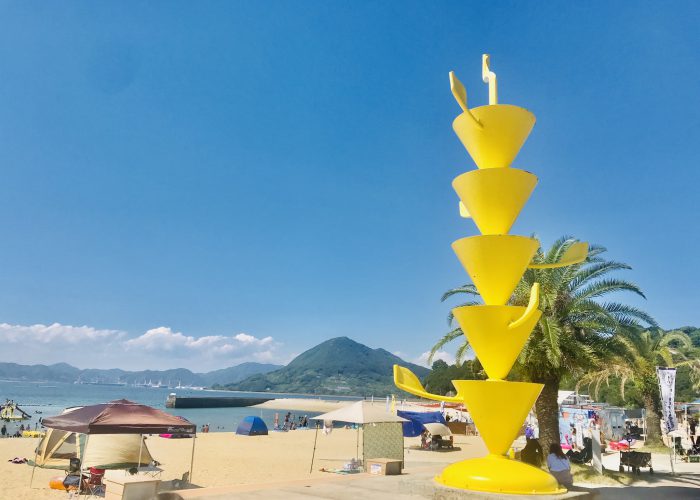 This beace is an 800-meter long beach recognized as one of Japanese 88 Swimming Beaches. Home to beautiful white sands and plenty of space for watersports, this beach is offering up beautiful views of the sun. There’s also camping, sea-kayaking, SUP boats and more for activity-lovers to enjoy.
Data：Setoda Sunset Beach
Address / 1506-15 Tarumi, Setodacho, Onomichi, Hiroshima 〒722-2404 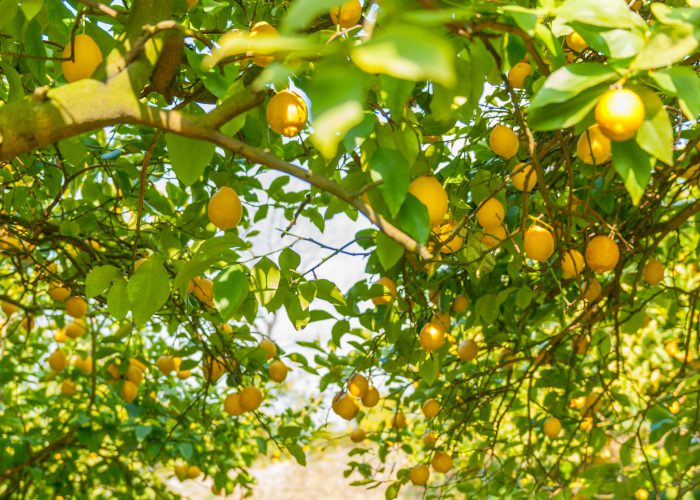 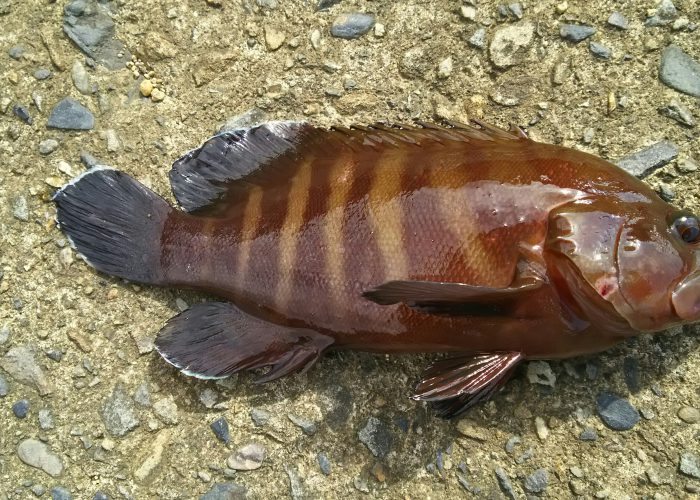 Ikuchijima, one of the leading citrus-producing areas in Japan, is famous for its “eco-lemons,” which use less pesticides and can be eaten right down to the skin. Check out the sweets and souvenirs made from lemons. Known as a high-class fish, Mahata is extremely tasty! Not only is it good for sashimi and sushi, but it is also recommended for boiling or cooking in a pot because of its delicious soup stock.
From Ikuchijima, on to Omishima!

From Setoda Beach to Tatara Shimanami Park
18 min. by car 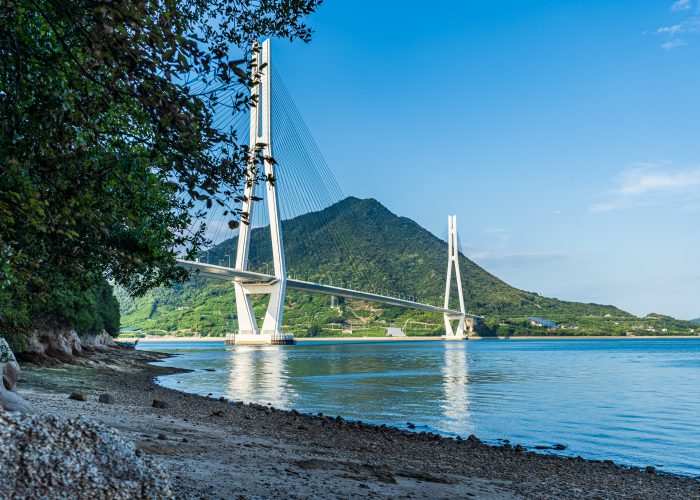 Tatara-Shimanami Road Station is located right by one of Shimanami Kaido's biggest highlights, Tatara-Ohashi. The spectacular view of this bridge is not to be missed. The food here is also very much worth checking out.
Data：Tatara Shimanami Park
Address / 9180-2 Inokuchi, Kamiuracho, Imabarri, Ehime〒794-1402
TEL/ 0897-87-3866

From thepark to Oyamazumi Shrine
10 min. by car 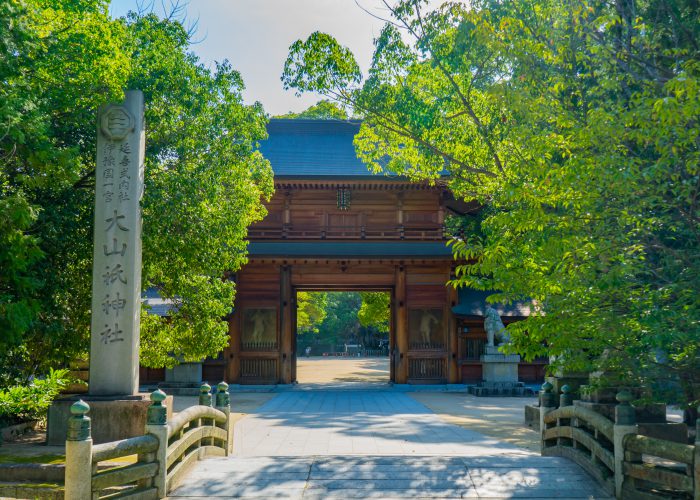 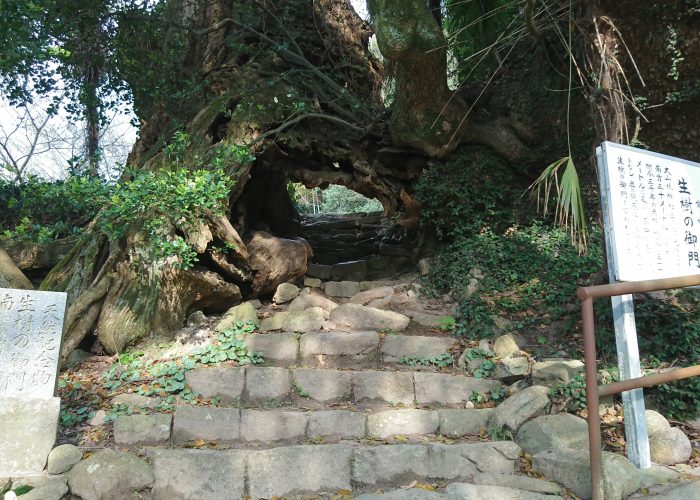 Oyamazumi Shrine is the head shrine of a network of over 10,000 branch shrines throughout Japan. Here the god of “mountains, seas, and combat” is enshrined, and countless warriors came here to pray for success in battle over the years. The massive camphor tree that has accompanied the shrine on its journey through history is 2,600 years old.
Data：Oyamazumi Shrine
Address / 3327 Miyaura, Omishima-cho, Imabari, Ehime 794-1393
TEL/ 0897-82-0032
From the shrine to the hotel
10min. by car 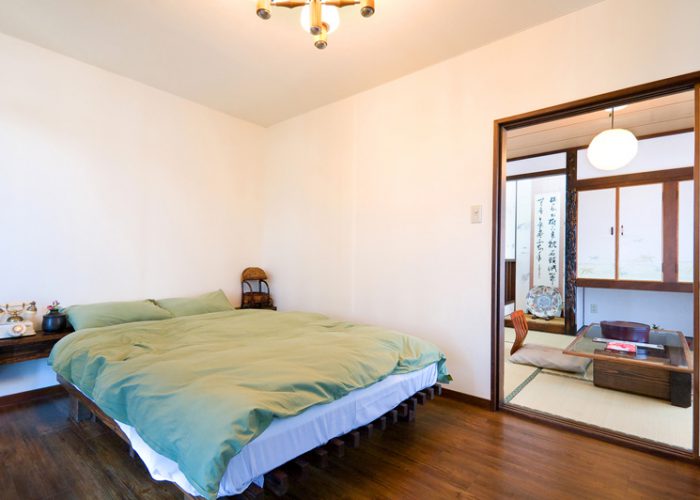 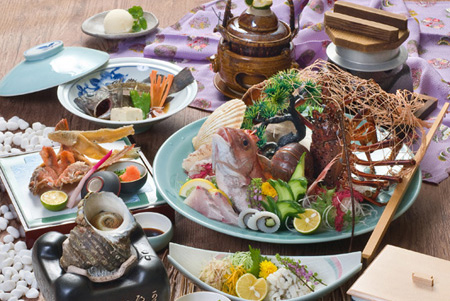 Fujimien is a traditional Japanese Ryokan on the coast of Omishima island. It has a retro, Showa period style with a fish tank in the lobby showcasing local marine life. They offers karaoke rooms, a cafe, and a banquet hall.
Data：Shimanami Kaido Restaurant & Ryokan Fujimien
Address / 5733 Inokuchi,Kamiuracho Imabari, Ehime 794-1402
TEL/ 0897-87-2025

Pass through Hakata Island
Hakata Island has been active in the salt industry for a long time and is famous as "Salt Island". "Hakata Furusato Historical Park" displays industrial and cultural materials of Hakata Island, including salt farms and shipping.

From the hotel to a museum in Oshima
25min. by car 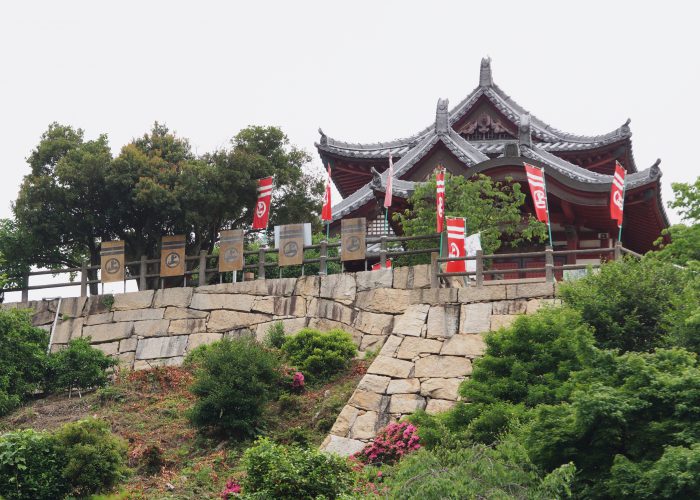 The museum presents the maritime history of the Murakami Suigun, who were in control of the Seto Inland Sea during the Sengoku period. The exhibition includes precious documents on the history and culture of the Murakami Suigun and the Imabari area. The photo shows the castle-type museum "Innoshima Suigun Castle" in Innoshima, both of which display interesting materials for history lovers.
Data：Murakami Suigun Museum
Address / 1285 Miyakubo, Miyakubocho, Imabari, Ehime 〒794-2203
TEL/ 0897-74-1065

From the museum to Kirousan Observatory
22 min. by car 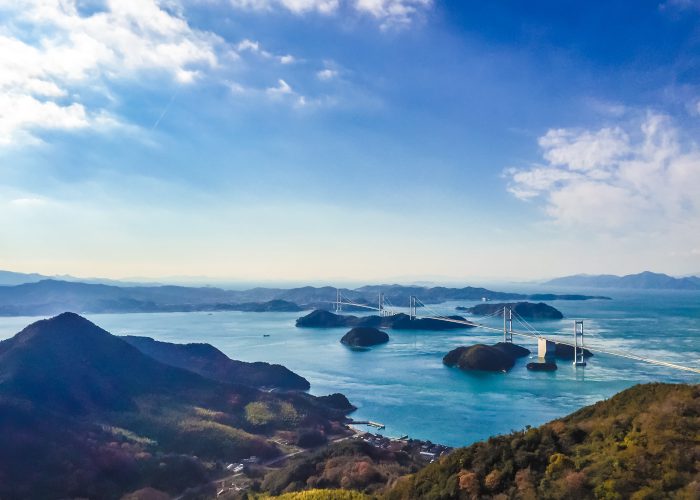 In contrast to the Kirosan Observatory, where the islands of the Seto Island Sea are seen from a distance, located on the north-east end of Oshima, provides a much closer view of the islands and their green mountains.
Data：Kirousan Observatory Park
Address / 487-4 Minamiura, Yoshiumucho, Imabari, Ehime 〒794-2115

From the observatory to Dogo Onsen
70min. by car 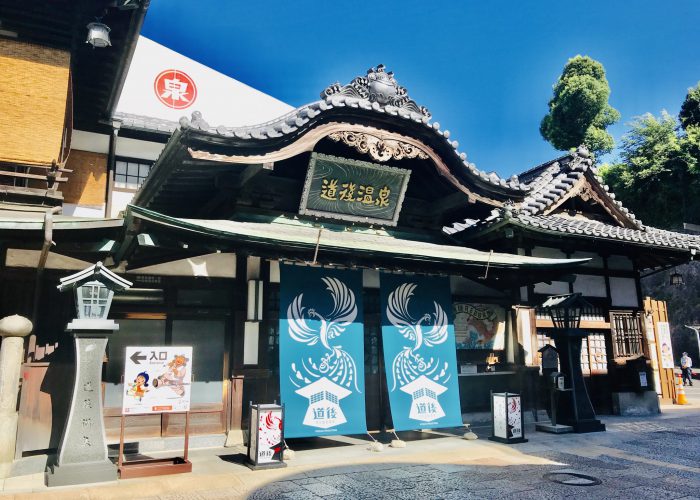 The Dōgo Onsen Honkan is a picturesque symbol of Japan’s oldest hot spring. In 1994 it was the first public bathhouse in Japan designated as a National Important Cultural Property, and in 2009 it was awarded the top rating of 3 stars by the Michelin Green Guide Japan.
Data：Dogo Onsen
Address/ 5-6 yunomachi, Dogo, Matsuyama, Ehime 〒790-0842
TEL/ 089-921-5141

After refreshing yourself in the hot springs, go to the airport.

/ 10km
Return to the car and Back to Tokyo

Okunoshima, known for its wild rabbits, can be reached in 15 minutes by ferry from Tadanoumi Port.Not only is it famous as a rabbit island, but it also produced poisonous gas during World War II, so you can visit the museum and the remains of the battery.

Shimanami Kaido is a bicycle sanctuary that cyclists all over the world long for. There are 15 bicycle rental terminals, and you can drop off at them, so even beginners can create a route where they can enjoy cycling. Crossing the bridge on the bike road is a rare opportunity, isn't it?

The sea bream that grew up in the tide of the Kurushima has an excellent taste. Besides sushi and sashimi, sea bream salt ramen is also famous.

Since the Seto Inland Sea has long been a major route for maritime transportation, pirates have infested it. The Murakami Suigun received a directive from the government to crack on them, and had power until the piracy ban was issued. There are still places related to Innoshima and Oshima.