HOME > Learn from the past by travelling > Nagasaki 3days 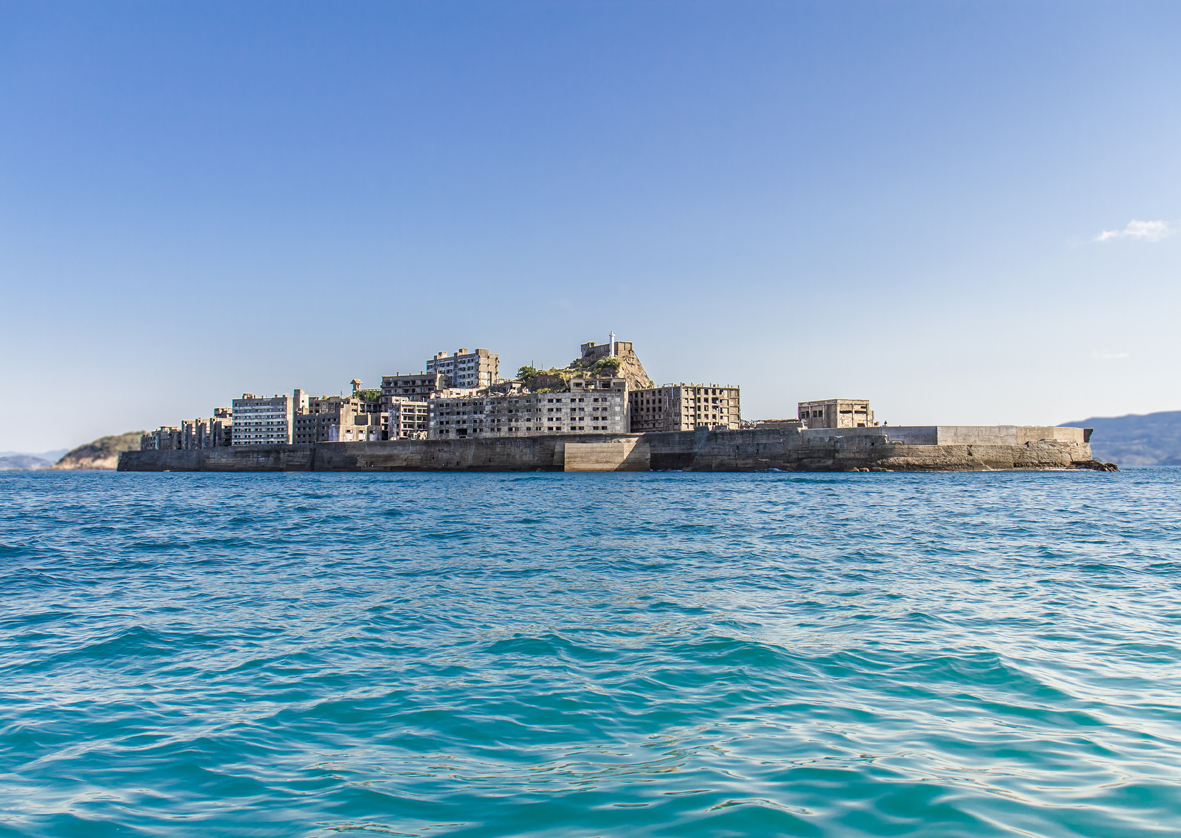 Nagasaki has been a diplomatic base for a long time since the city faces the East China Sea, and there are many places where you can feel the history. Dejima, which was the only island of trade during the isolation period, Gunkanjima, which prospered by the submarine coal mines, Nagasaki City, where the atomic bomb was dropped… Learn about the history of Nagasaki, which has experienced many prosperity and bitterness.

The only port that was open during the isolation period

Take a walk to the lighthouse

Oura church, the oldest one in Japan

Western-style building and a garden with mixture culture

Learn what happened on 9th August

View from the top of Mt. Inasa

Where love can be found ♡

Enjoy a mixed culture in Nagasaki!

From Haneda to Nagasaki airport

From Airport to Dejima
40min. by Airport bus 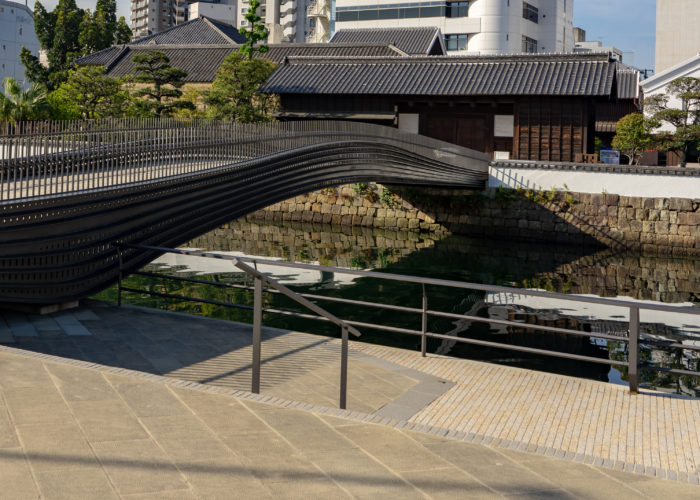 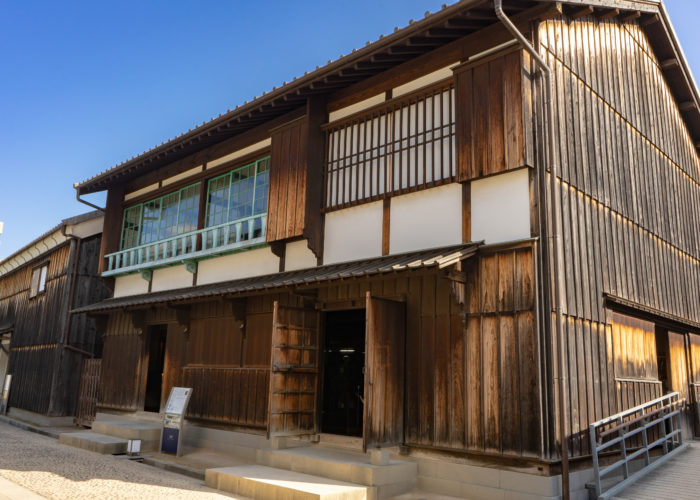 Dejima was an artificial island first built to house Portuguese traders in 1634 as part of the exclusion of foreigners policy during the Edo Period. Dejima is not an island anymore, as the surrounding area has been reclaimed in the 20th century. However, a number of Dejima's historical structures remain or have been reconstructed in the area, including various residences, warehouses, walls and gates.
Data：Dejima
Address / Dejimamachi, Nagasaki, Nagasaki 850-0862
TEL/ 095-821-7200 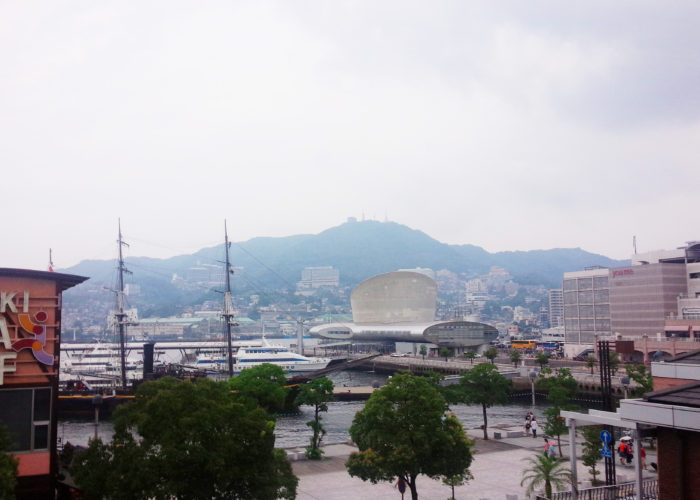 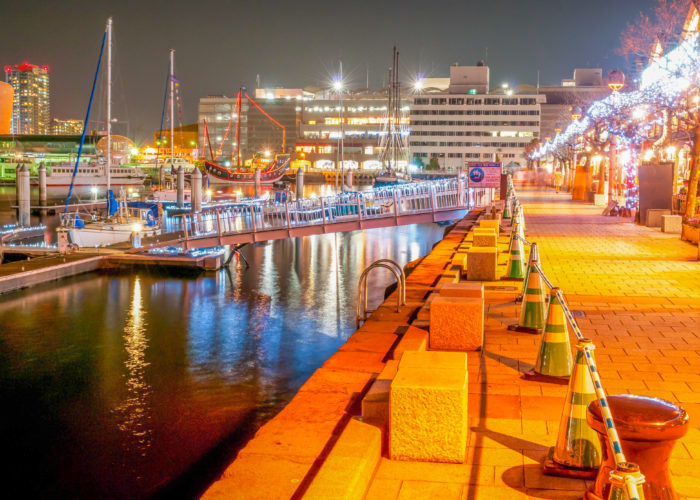 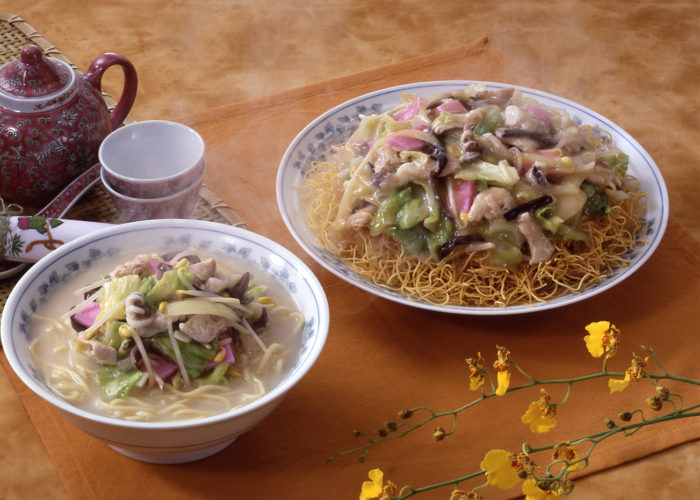 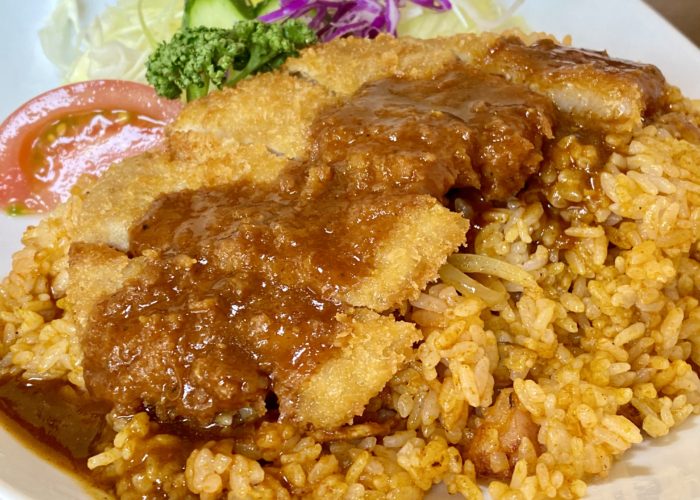 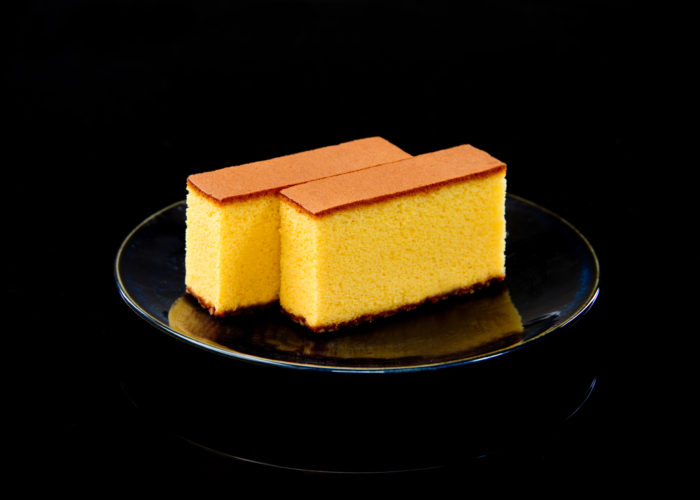 The Best food in Nagasaki

Nagasaki’s food culture is a result of its historical connections with China and Europe. While heavily influenced by European and Chinese tastes, Nagasaki dishes have certainly developed their own flavour. Not only Nagasakli Chanpon, Turkey rice are a mix of culture and goodness all in one plate! You should get Castella (sponge cakes) as a souvenior!
From Dejima to Nagasaki Station
10min. by Tram

From Nagasaki Station to Iojima
45min. by free shuttle bus 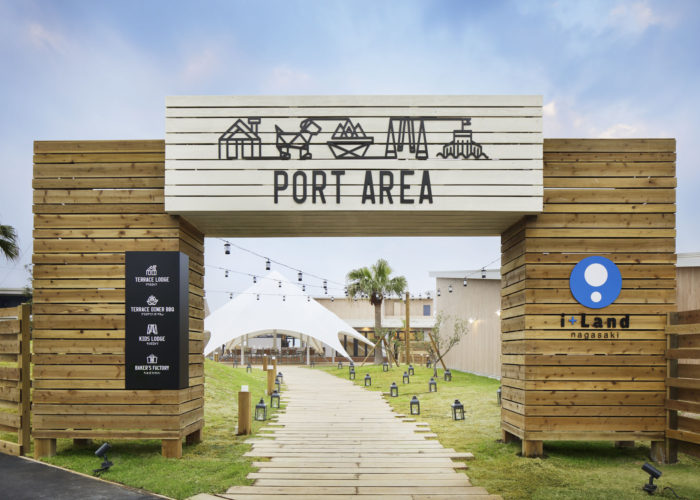 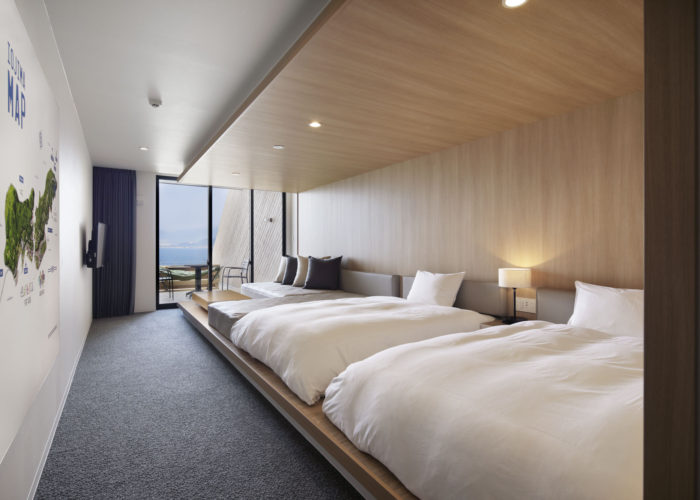 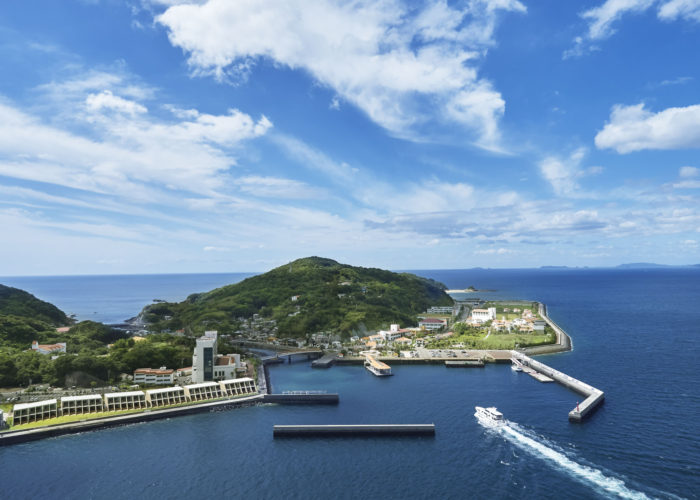 Renovated in April 2018, i + Land Nagasaki is full with activities – the marine activities such as SUP surfing, sea kayak – rental cycle and Segway riding, the time you have will never be enough to enjoy all the entertainment and the nature. Free shuttle service from Nagasaki sta. is available for guests.
Data：i+Land nagasaki
Address / 1-3277-7 Ioujima-machi Nagasaki City ,Nagasaki, Japan 851-1201
TEL/ 095-898-2202 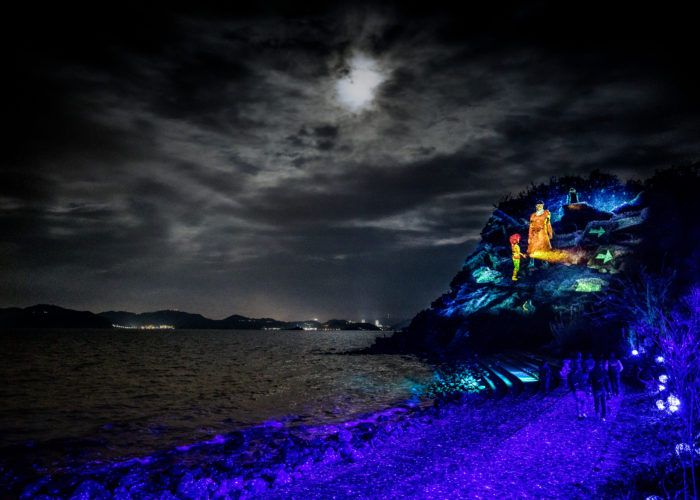 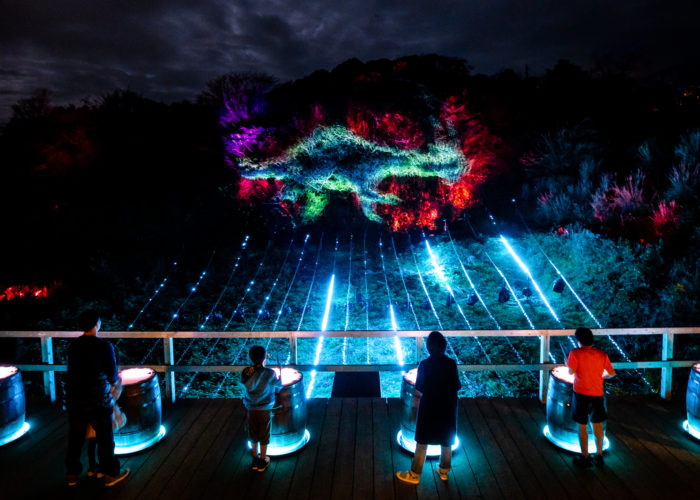 Landed Battleship island, the remains of the Industrial Revolution.

To the lighthouse at the tip of the island.

From the hotel to the lighthouse
30 min by walk 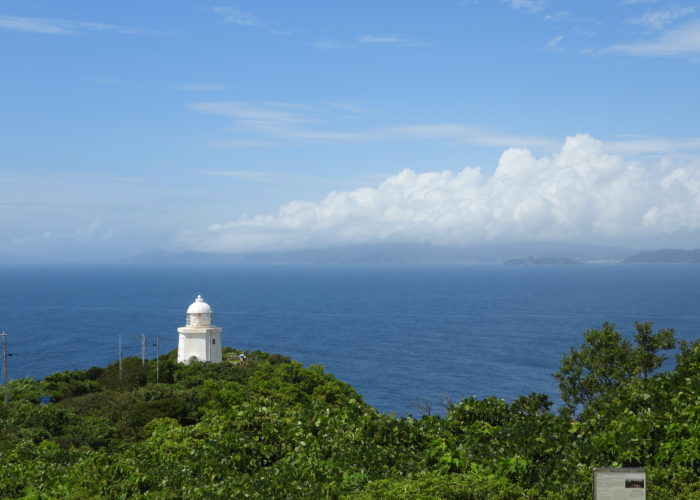 This lighthouse is one of eight lighthouses built in accordance with the Edo Treaty, signed between the US, the UK, France, the Netherlands and the Japanese government in 1866. As the first lighthouse in Japan made from steel, it was carefully maintained up until the atomic bombing of Nagasaki. The lighthouse was fully restored after World War II.
Data：Iojima Lighthouse
Address / 1-3240 Iojima-machi 851-1201
From the lighthouse to the hotel
30 min. by walk

Check out at the hotel.
Board a ship on the Gunkanjima tour! 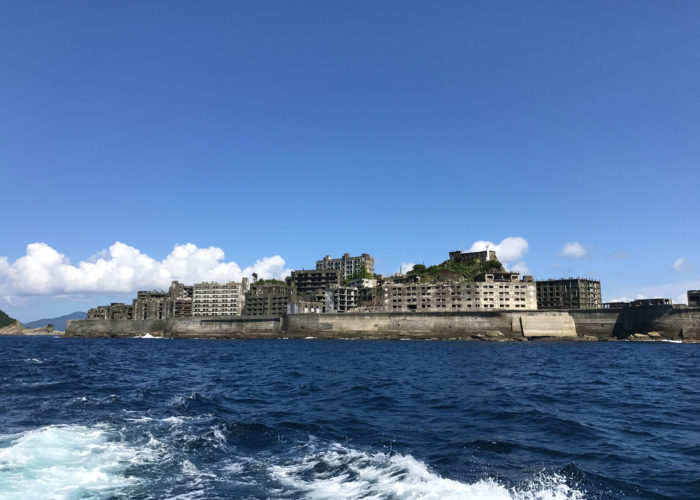 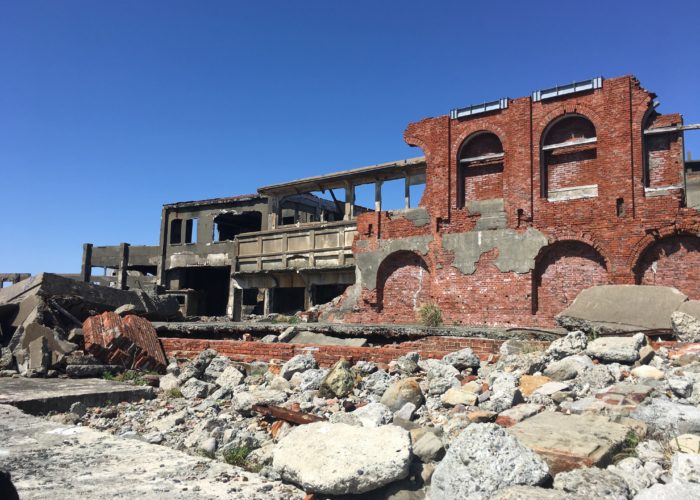 Hashima is called Gunklanjima(Battleship island) because of the shape. Coal was first discovered on the island. Industrial mining began, and as production increased, the island was expanded, and large residential and industrial buildings and high sea walls were constructed. In addition to tours, there is also a digital museum at the dock.
Data：Gunkanjima(Hashima)
Address / Hashima. Takashimacho, Nagasaki, Nagasaki 851-1315
TEL/ 095-895-9300

From the dock to the hotel
10min. by Tram

Check in at the hotel.
Leave your luggage and take a walk in the city!

From the hotel to Oura Church
10 min. by Tram 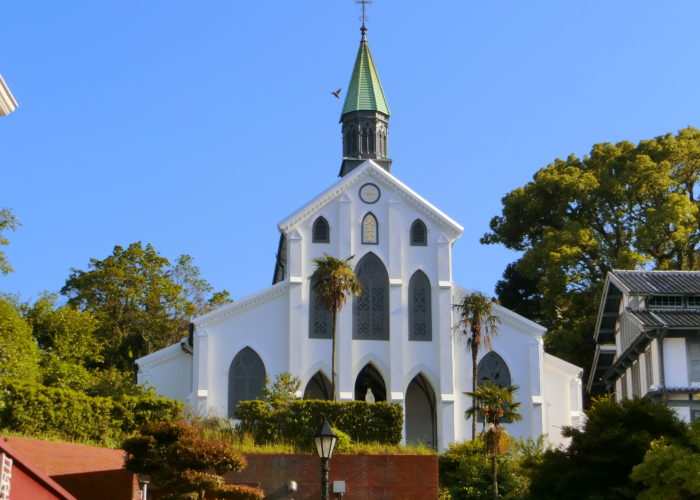 Oura churach as known as "Oura Cathedral, The Church of 26 Martyrs." was built by the end if Edo period. The church was constructed in the Gothic style and is Japan's oldest existing wooden church. Oura Cathedral became famous worldwide as the church that discovered the "hidden followers" who had survived the religious persecution.
Data：Oura Church
Address / 5-3 Minamiyamate-machi, Nagasaki, Nagasaki 850-0931
TEL/ 095-823-2628

From Oura Church to Glover Garden
3 min. by walk 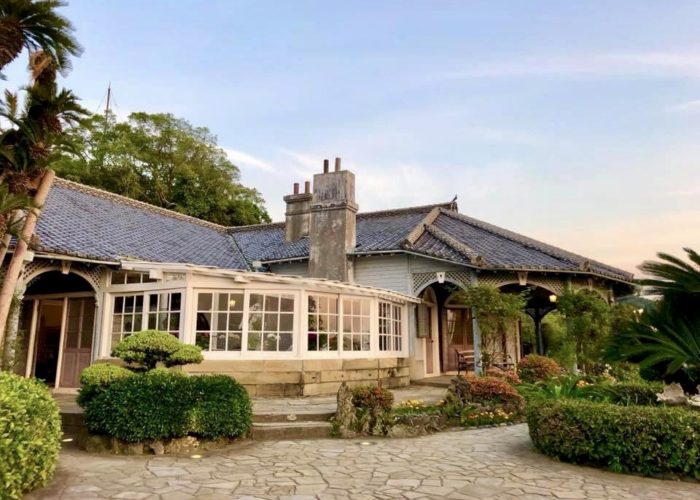 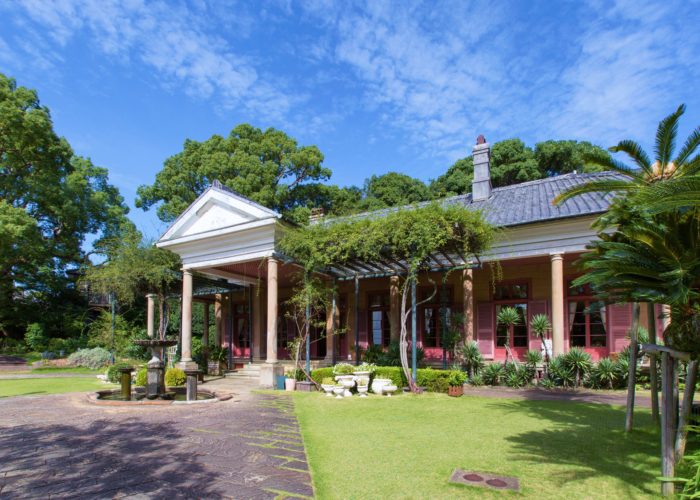 Glover Garden is an open air museum in Nagasaki that exhibits mansions of several of the city's former foreign residents and related buildings. The gardens, in addition to revealing the living circumstances of Nagasaki's foreign residents during what is known as "the period of foreign settlement," also display an abundance of fascinating natural beauty.
Data：Glover Garden
Address/ 8-1 Minamiyamate-machi, Nagasaki, Nagasaki 850-0931
TEL/ 095-822-8223

From Glover Garden to China Town
15 min. by Tram 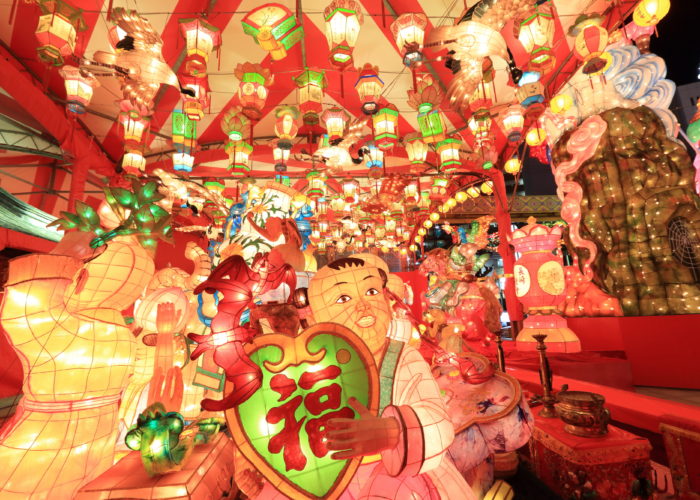 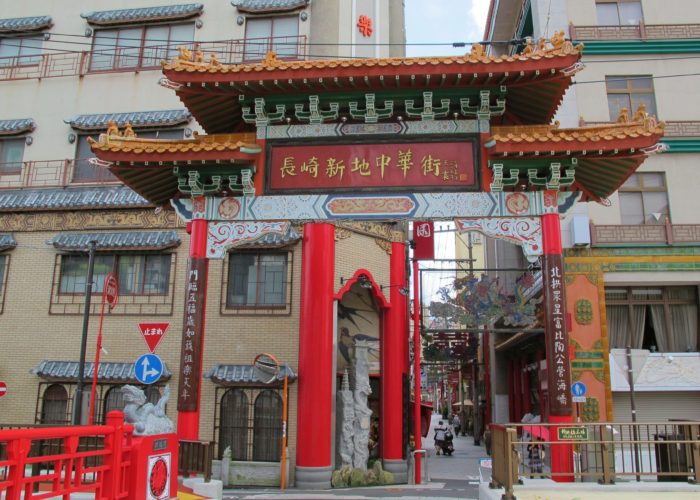 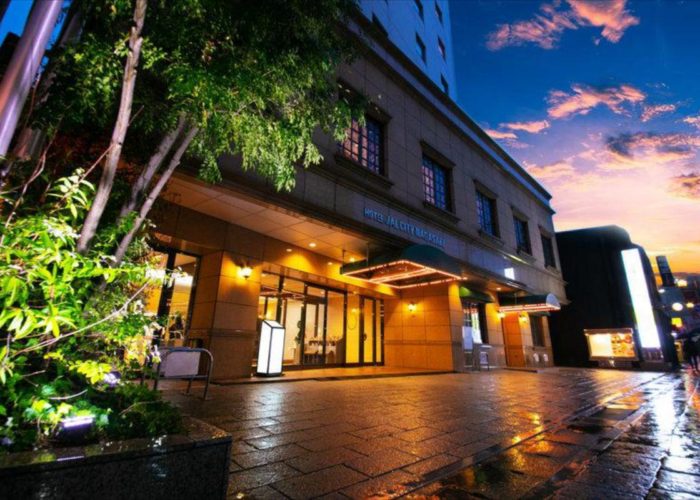 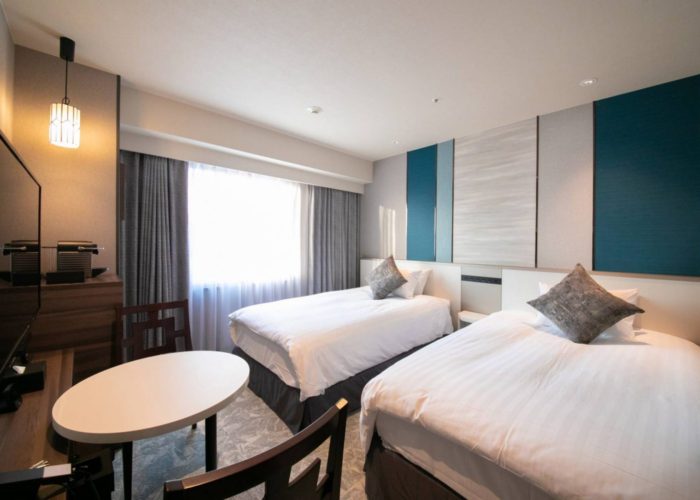 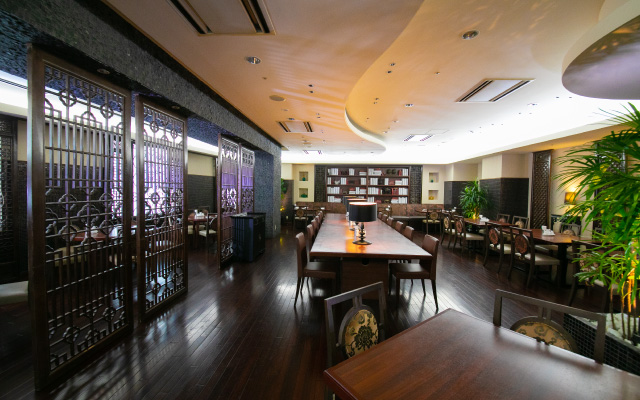 Hotel JAL City Nagasaki is located right next to Chinatown, making it a very convenient place for both sightseeing and business. The guest rooms, which were renovated in 2020, are used the indigo colors as an accent color, it is also the color of Hasamiyaki and Mikawachiyaki which are local pottery of Nagasaki.
Data：Hotel JAL City Nagasaki
Address / 13-20 Shinchi-machi, Nagasaki, Nagasaki 850-0842
TEL/ 095-825-2580

Let’s think about war & peace while looking at Nagasaki city from the mountaintop.

From the hotel to Nagasaki Peace Park
25 min. by Tram 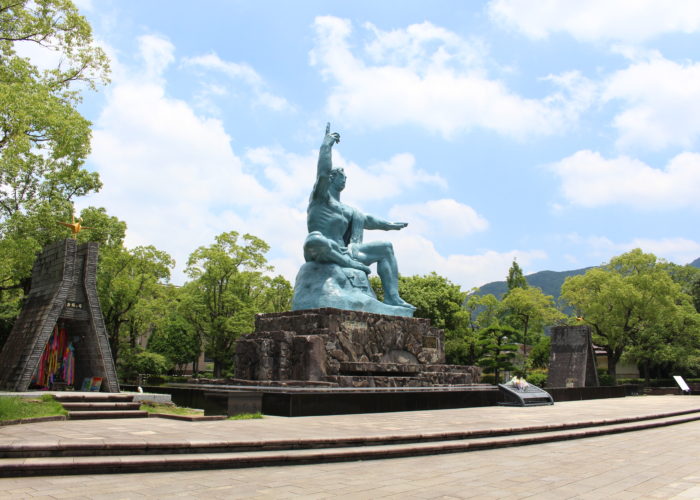 The complex is comprised of two parks and a memorial museum. North across the street from the Hypocenter Park lies the Memorial Park that contains the iconic Peace Statue, a large fountain and various other memorials presented to the city by various governments and groups from across the world.
Data：Nagasaki Peace Park
Address /Matsuyama-machi, Nagasaki, Nagasaki 852-8118

From Peace Park to Atomic Bomb Museum
5 min. by walk 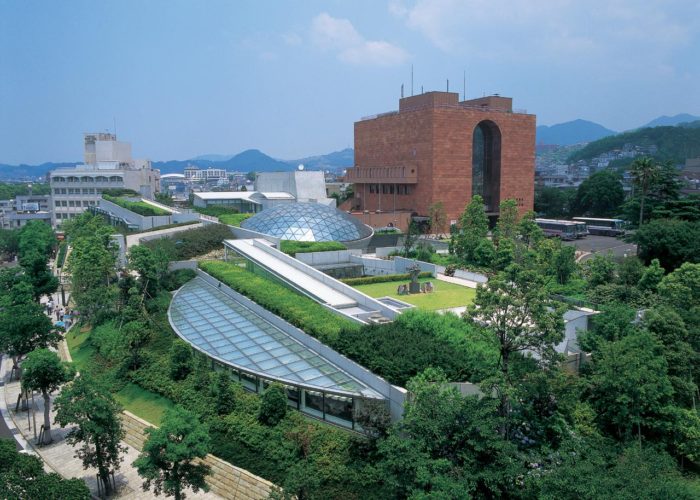 The atomic bomb was dropped over the Urakami district of Nagasaki on August 9, 1945. The Nagasaki Atomic Bomb Museum covers the history of this event in the accessible form of a story. It begins with the disastrous scene of the attack and includes the events leading up to the dropping of the atomic bomb, the reconstruction of Nagasaki up to the present day, the history of nuclear weapons development, and the hope for a peaceful world free of nuclear weapons.
Data： Nagasaki Atomic Bomb Museum
Address/ 7-8 Hiranomachi, Nagasaki, Nagasaki 852-8117
TEL/ 095-844-1231

From Atomic Bomb Museum to Mt. Inasa
7 min. by taxi 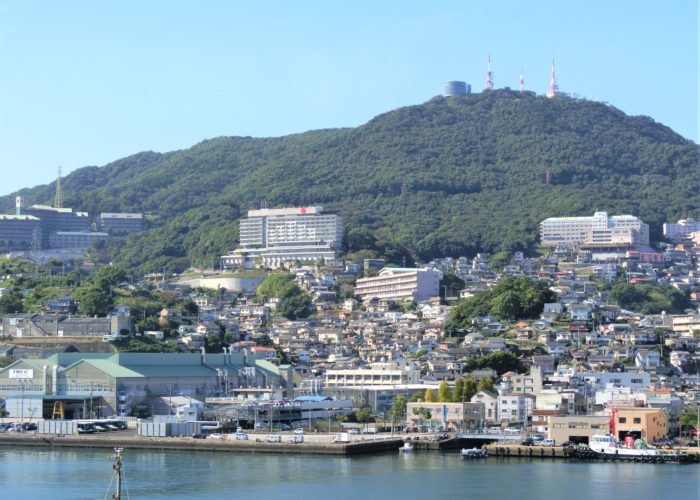 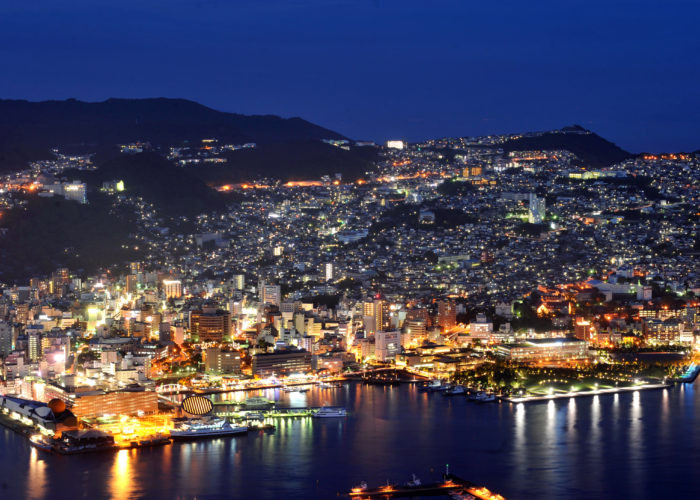 Mount Inasa is a 333 meter high mountain close to Nagasaki's city center. The summit can be reached by ropeway, bus or car and offers great views over the city. The night views from Mount Inasa are also amazing andranked among Japan's three best night views.
Data：Mount Inasa
Address /Inasa-machi, Nagasaki,Nagasaki 852-8011

From Mt. Inasa to Megane-bashi
10min. by taxi 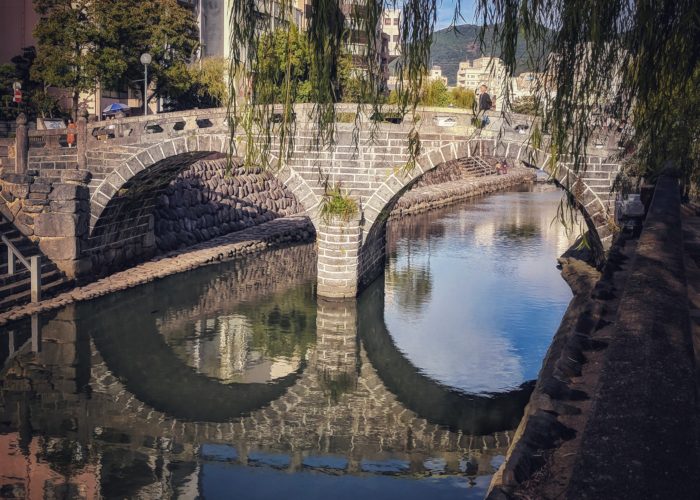 The bridge gets its name from its resemblance to a pair of spectacles when the arches of the bridges are reflected as ovals on the surface of the river. There is a stone walkway along the river bank that makes for a pleasant stroll with nice views of the water and bridges.
Data：Megane-bashi(bridge)
住所/ Uonomachi or Suwa-machi, Nagasaki, Nagasaki 850-0874
TEL/ 095-829-1193

From Nagasaki city area to airport
40 min. by Airport bus

Sasebo is the second largest city after Nagasaki. Huis Ten Bosch, a huge theme park that recreates the streets of Europe, has seasonal fun and creates an extraordinary life. Known for having a US military base, "Sasebo Burger" is a citizen's soul food.

Literally meaning 99 islands, there are actually closer to 200 verdant patches scattered along the coastline. Kujukushima are beautiful natural landscapes with a complex interwoven rias coast and islands. Almost the entire area has been designated as the “Saikai national park”, and the density of islands is the highest in Japan.

The Shimabara Peninsula is a popular hot spring and hiking destination that lies to the east of Nagasaki City. Unzen Onsen, an attractive hot spring resort town, can be found near the peak of the still active volcano. Wild dolphin watching is available at the southernmost tip of the peninsula.

The festival has been celebrated for about 400 years and incorporates different aspects of Chinese and Dutch cultures, which have played a role in the city's history. The festival's highlights are the dance and show performances by groups representing Nagasaki's various city districts.

Hasami-yaki, which is simple, functional, durable and easy to handle, is becoming more and more popular year by year because there are many vessels that can be purchased at reasonable prices. It features a smooth porcelain texture and indigo painting.

Hirado Castle stands on a hill guarding Hirado Port and the Hirado Strait, which used to be part of an important trade route between Japan and the Asian mainland. A large-scale renovation was completed and it was reopened in 2021.