HOME > Learn from the past by travelling > Hiroshima 3days 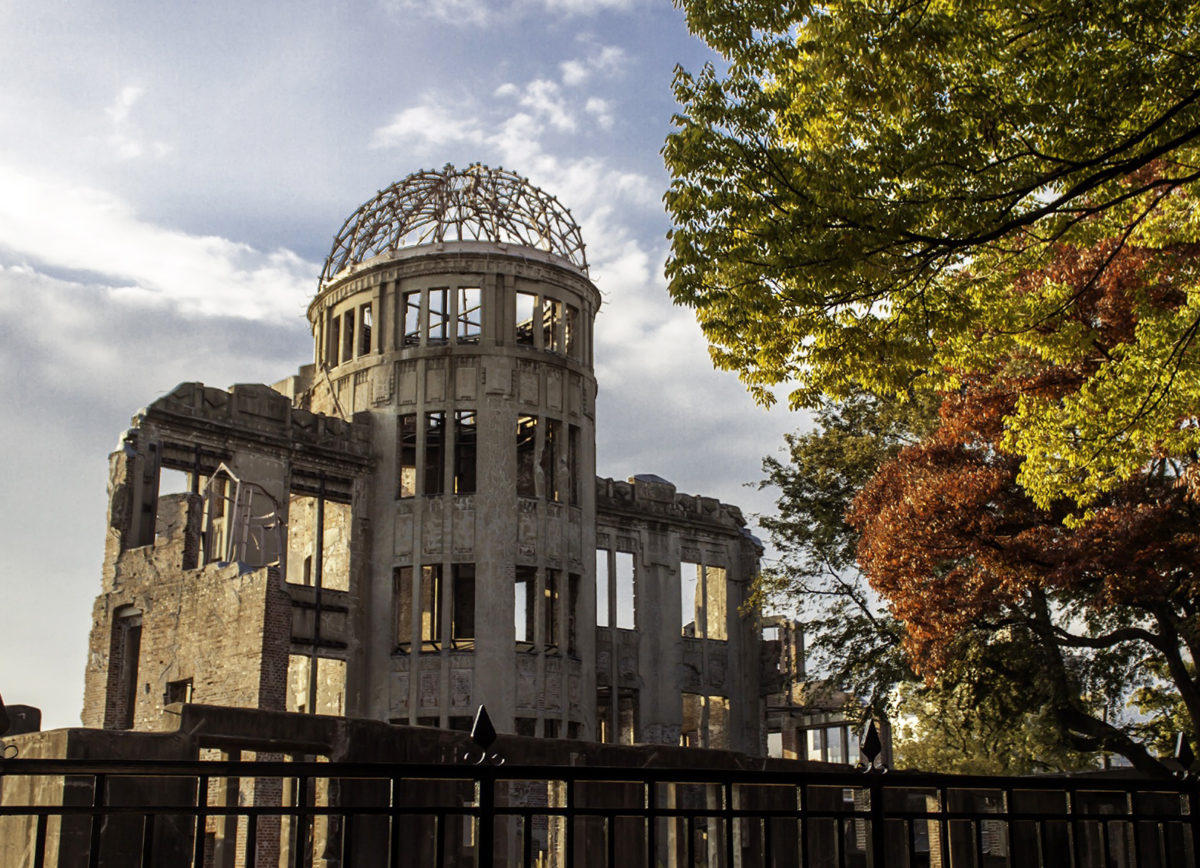 Hiroshima is the city where the world’s first atomic bomb was dropped. Kure City, where the shipbuilding industry flourished and battleships were built. Iwakuni City, where the Japan-U.S. joint base is located. By visiting these cities, we will look back on the Second World War and think about peace in the future.

Take a ferry to Miyajima

Sightseeing in the town of Kure

A giant model of the battleship Yamato!

View of the Seto Inland Sea

From Tokyo Sta. to Hiroshima Sta. by Shinkansen

From Hiroshima Sta. to Kamiyacho by Streetcar

Leave luggage at the hotel.

From the hotel to Hiroshima castle
10min. by walk 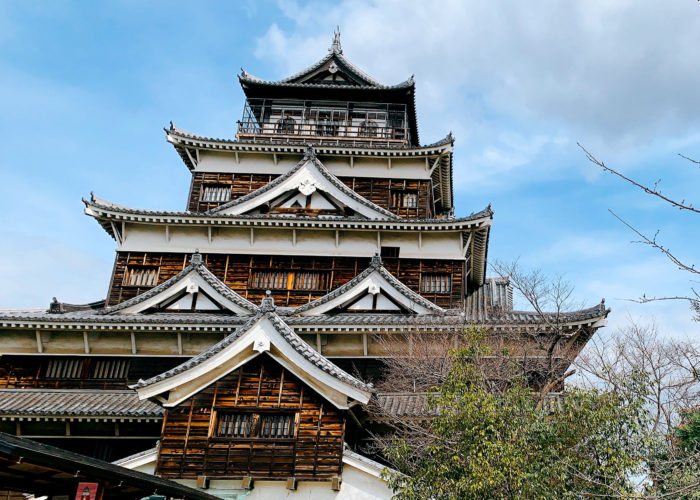 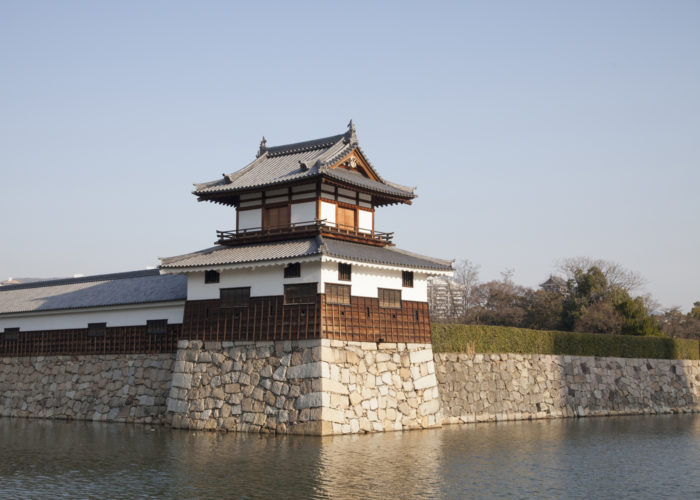 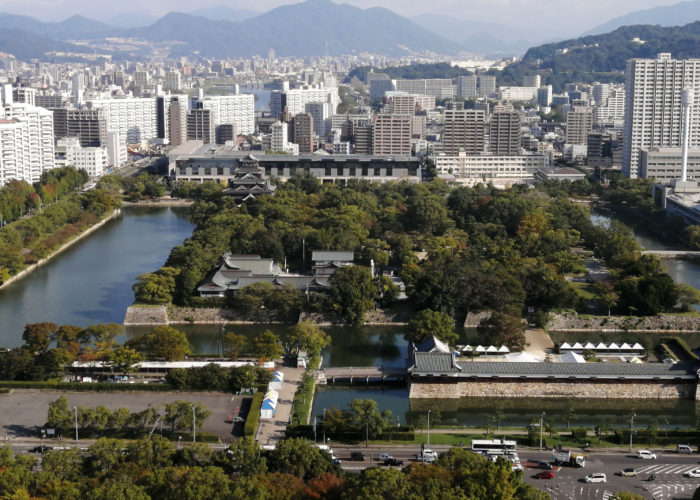 The castle was destroyed in the atomic bombing and was restored in 1958. The inside of the castle tower is a museum, where the structure of the castle and the life and culture of the castle town of Hiroshima are displayed using actual materials, models, and videos. You can take photos wearing Samurai costumes. From the observation room, you can see the Atomic Bomb Dome, Green Arena, and even Miyajima on a clear day.
Data：Hiroshima Castle
Address/21-1 Motomachi, Naka-ku, Hiroshima, Hiroshima Prefecture 730-0011
TEL/082-221-7512

From Hiroshima Castle to Atomic Bomb Dome
16 min. by walk 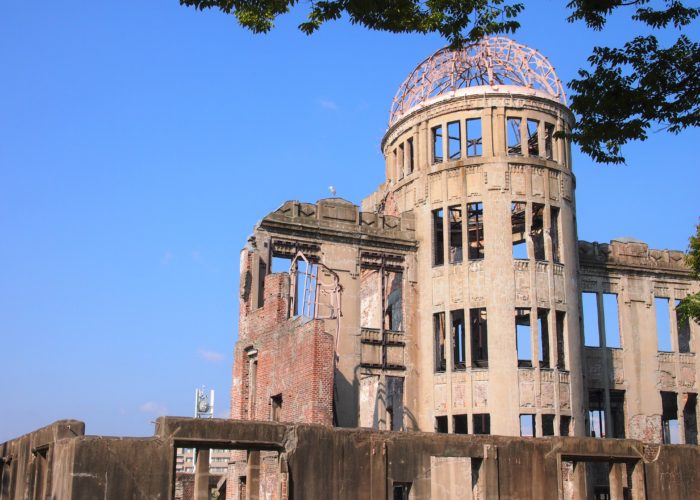 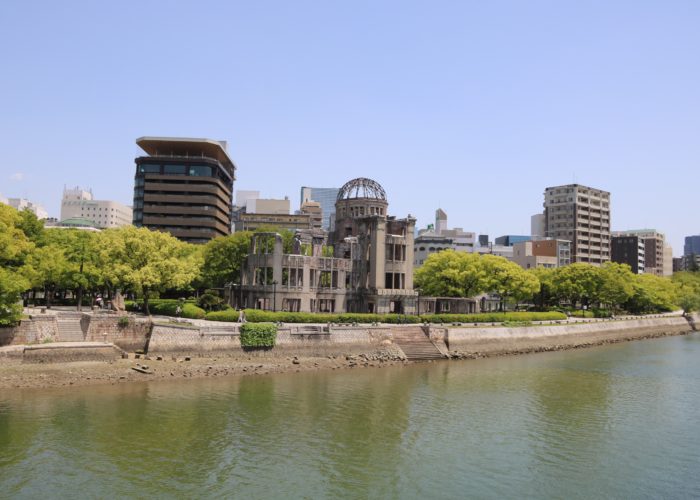 The Atomic Bomb Dome was built as the Hiroshima Prefectural Industrial Promotion Hall, where various expositions were held. Because of its modern European style architecture, which was rare at the time, it quickly became a symbol of Hiroshima. Although it is only 200 meters away from the hypocenter, it miraculously escaped total destruction and is now a symbol of peace in Hiroshima.
Data：Atomic Bomb Dome
Address/ 1-10 Otemachi, Naka-ku, Hiroshima, Hiroshima, 730-0051 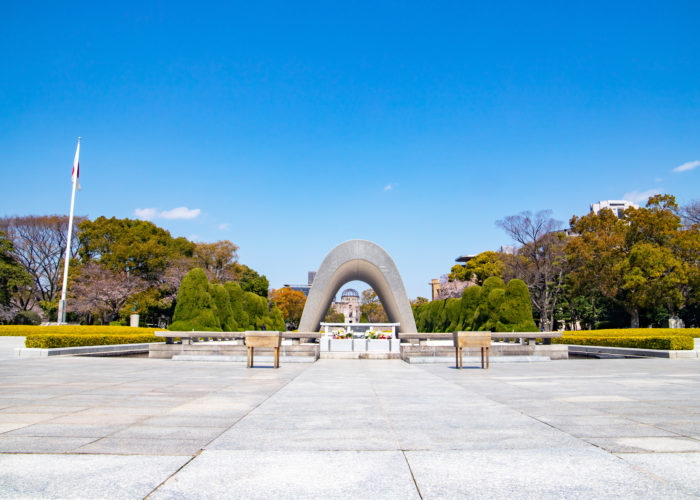 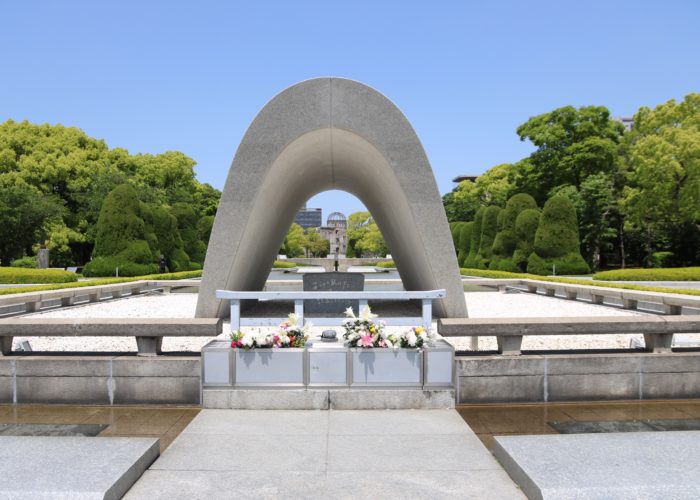 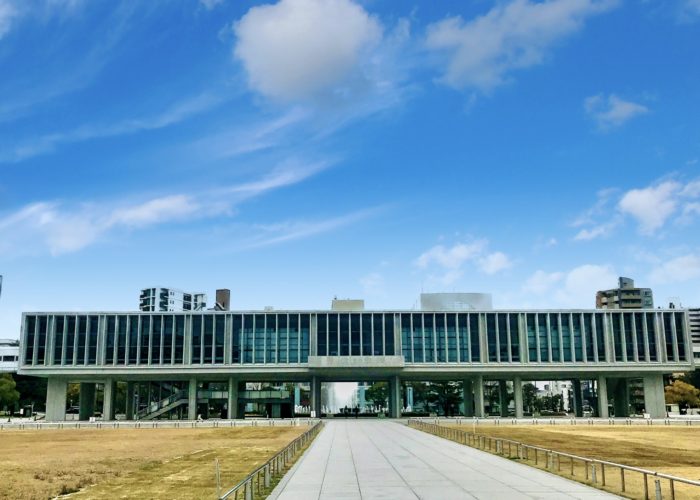 Hiroshima Peace Memorial Museum, opened in 1955, displays materials to convey the inhumanity of the atomic bombing and the horrific damage caused by the bombing. The permanent exhibition was extensively renovated in 1991. An audio guide in English is also available.
Data：Peace Memorial Museum
Address/ 1 -2 Nakajimacho, Naka-ku, Hiroshima, 730-0811
TEL/ 082-241-4004

From Peace Memorial Museum to Kamiyacho
15min. by walk 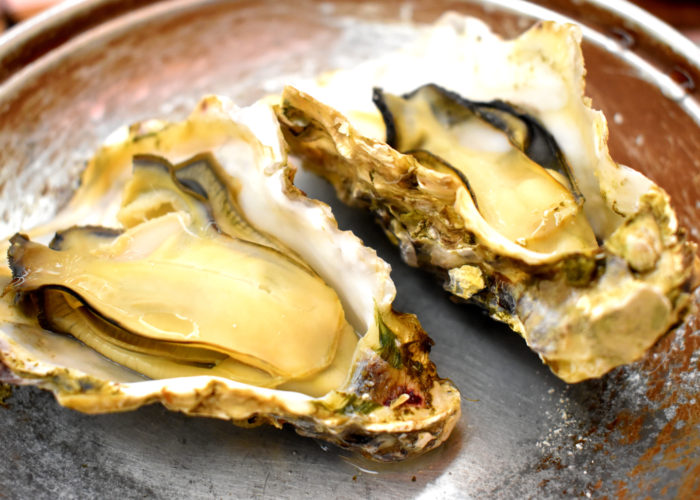 It is in the center of Hiroshima City, crowded with department stores and shopping malls, and there are many restaurants to choose from. It is also a convenient place to transfer to the streetcar. Hiroshima-style okonomiyaki with noodles in it, Hiroshima oysters with their rich, concentrated flavor, so many things to eat here!
Data：Kamiyacho
Address/ Kamiyacho, Naka-ku, Hiroshima, Hiroshima 730-0031 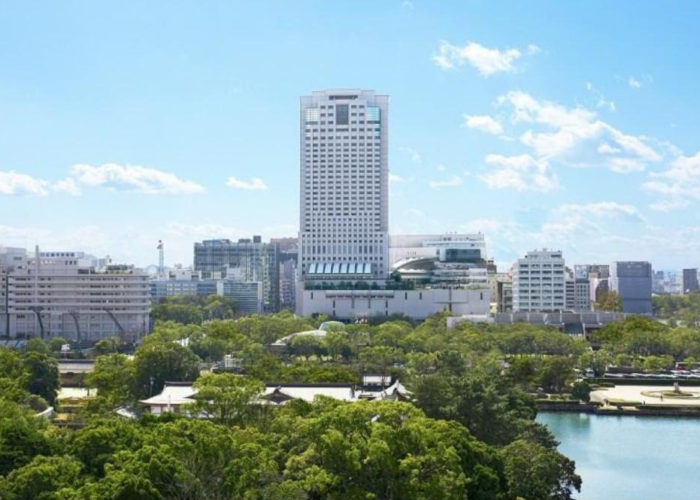 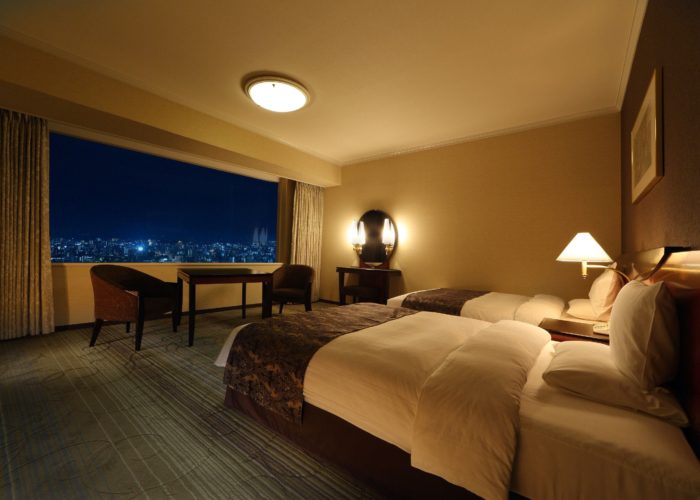 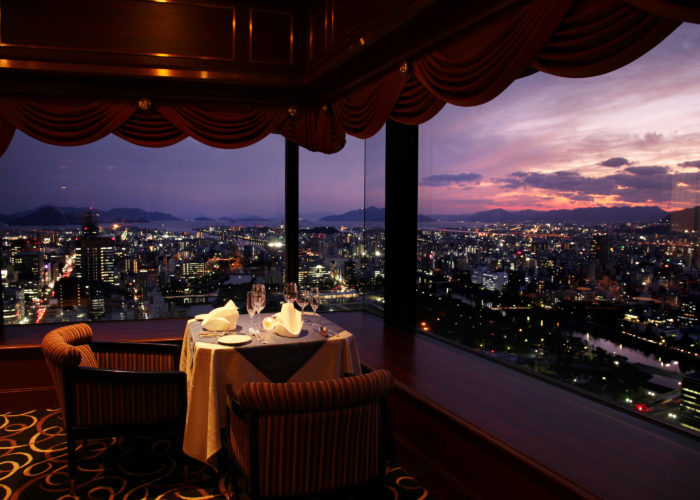 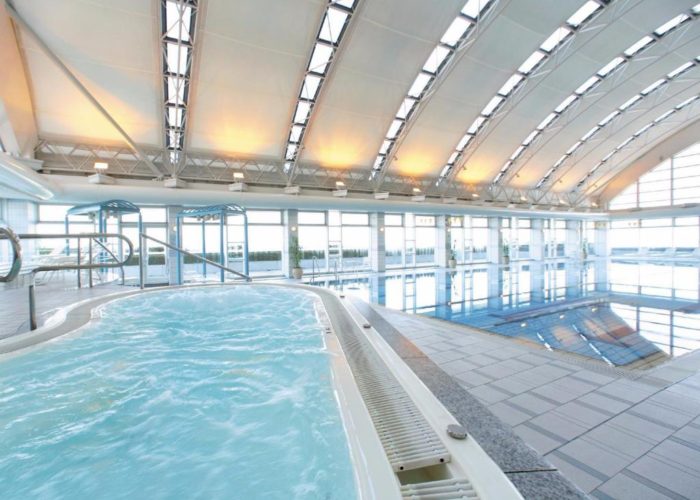 Rhiga Royal Hotel Hiroshima is conveniently located in the center of the city. When you enter the hotel, you can relax in a calm and high quality space. The hotel has seven restaurants, a swimming pool, fitness center, and other facilities to make your stay more comfortable. From the rooms and restaurants on the higher floors, you can even see the islands in the Seto Inland Sea.
Data：Rhiga Royal Hotel Hiroshima
Address/ 6-78 Motomachi, Naka-ku, Hiroshima 730-0011
TEL/ 082-502-1121

The Beauty of Water Mirror - Itsukushima Shrine and Kintai Bridge

From the hotel yo Miyajima Ferry Terminal
45min. by train 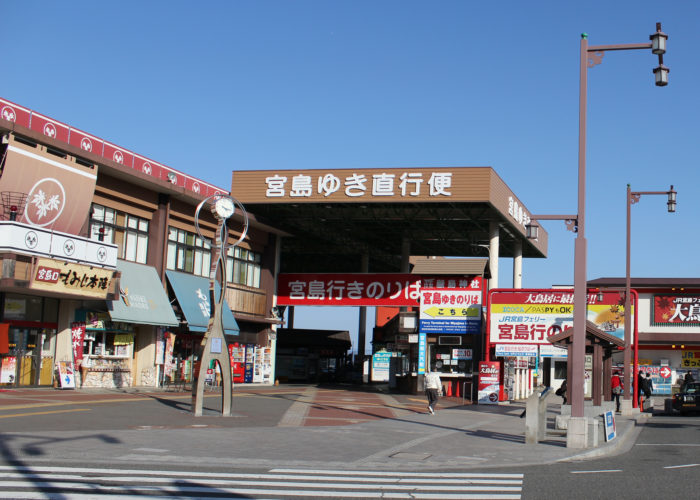 You can walk there from the JR Sanyo Line or the streetcar Hiroshima Miyajima-guchi. No reservations are required, and the ferry leaves several times an hour, so you can board without worrying about the time. The third floor of the ferry has an observation deck.
Data：Miyajima Ferry
Address/ 1-11-6, Miyajimaguchi, Hatsukaichi, Hiroshima 39-0411
TEL/0829-56-0315

From the Miyajima Terminal to Itsukushima Shrine
40min. by ferry 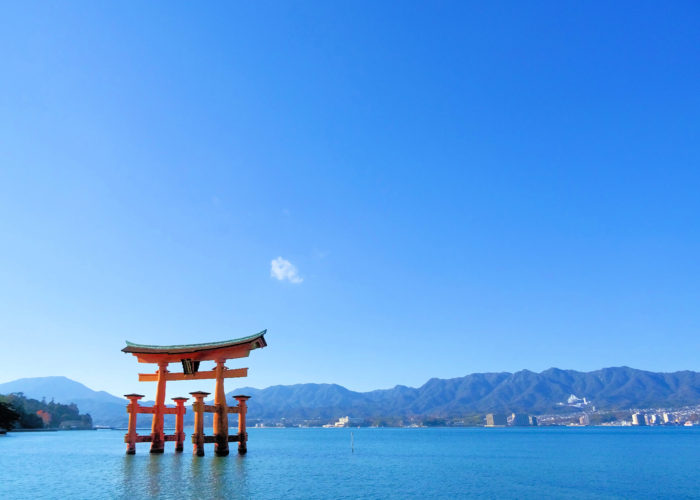 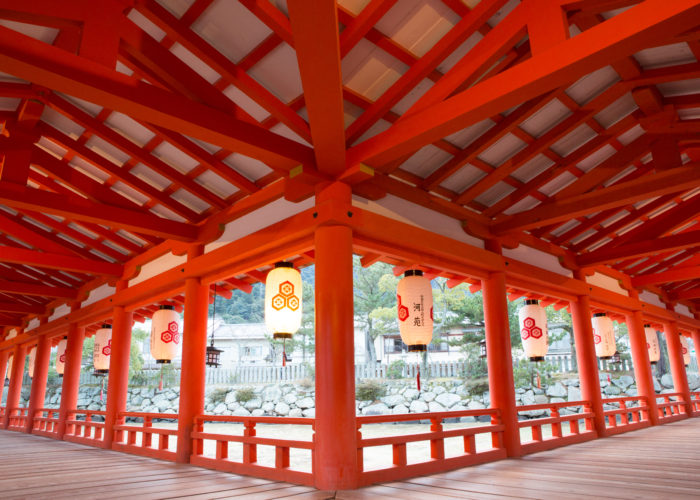 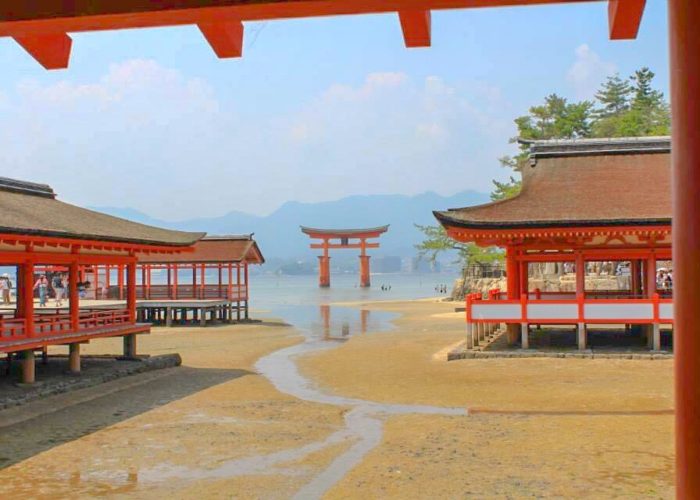 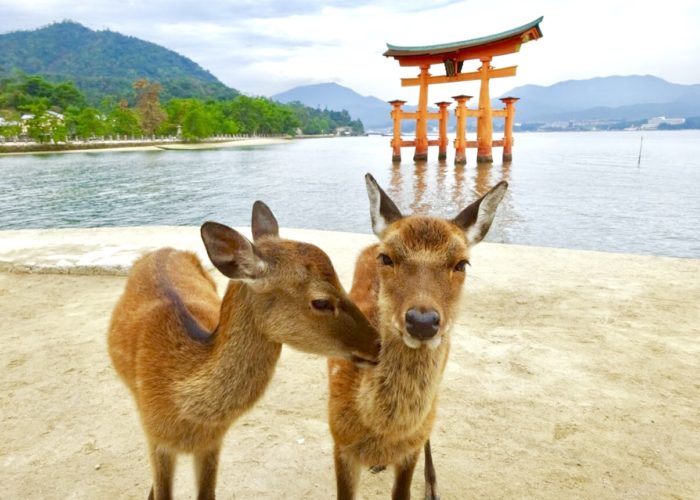 The Island Shrine of Itsukushima

The island of Miyajima has been worshipped as a deity since ancient times. It is the only one of its kind in Japan to be built on a site where the tide can rise and fall. The gorgeous architectural beauty attracts many visitors. At low tide, you can walk across to the Otorii gate.
Data：The Island Shrine of Itsukushima
Address/ 1-1 Miyajimacho, Hatsukaichi, Hiroshima 739-0588
TEL/ 0829-44-2020 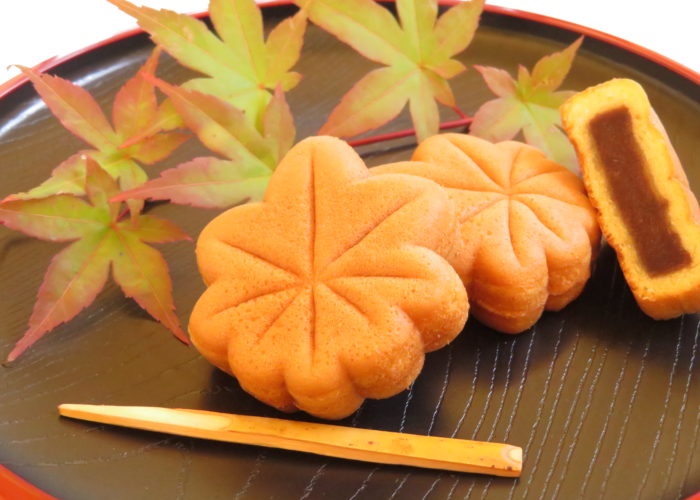 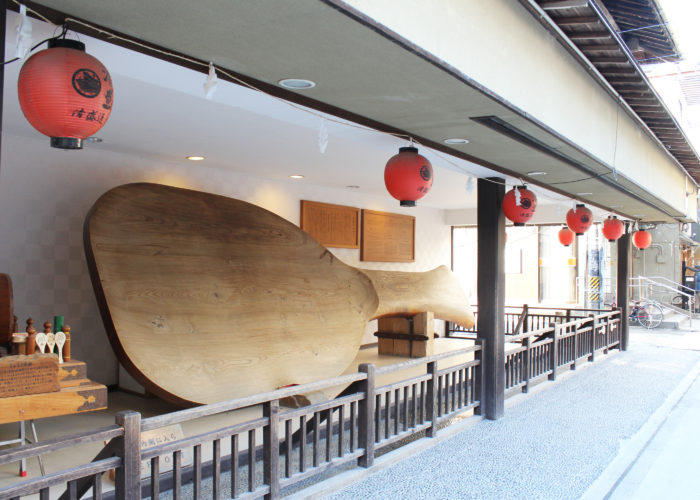 Momiji Manju is a must-have souvenir from Hiroshima. There are many stores selling everything from the standard old-fashioned to the more unusual varieties. Miyajima is the number one producer of rice paddles in Japan. How about getting one as a souvenir for good luck?
From Miyajima to Miyajimaguchi Station.
40分 min.by ferry

From Iwakuni Sta. to Kinataikyo by bus 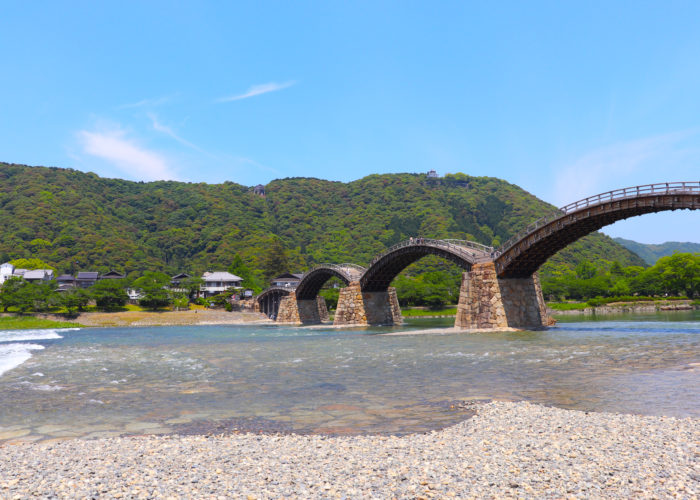 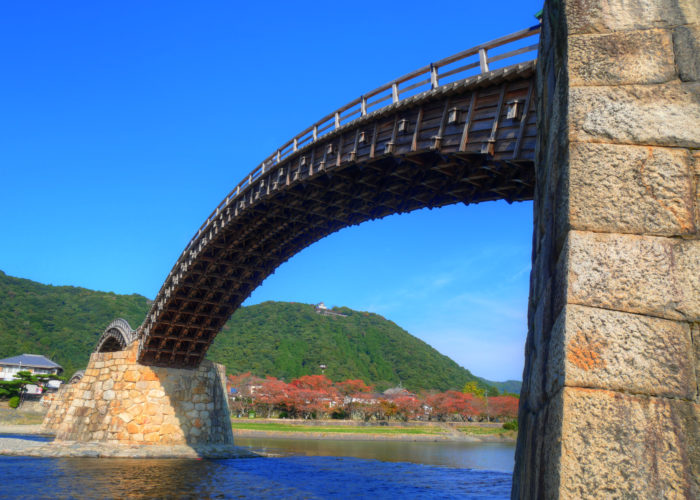 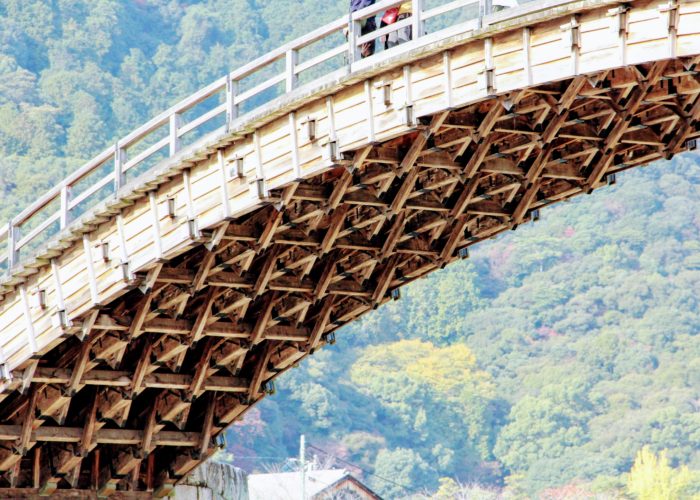 Kintaikyo Bridge, known as a miraculous bridge, spans the Nishiki River in Iwakuni City, Yamaguchi Prefecture, and is popular for its beautiful five-story wooden arches, which can be viewed from the riverbank, the riverbed, or on a sightseeing boat.The geometric patterns of the wooden structure, made by traditional construction methods, are beautiful and fascinating even if you are not a fan of structures.
Data：Kintaikyo
Address/ 14-51 Imadumachi, Iwakuni, Yamaguchi 740-8585
TEL/0827-29-5107

From Kinatikyo to Iwakuni castle
10min. by Ropeway 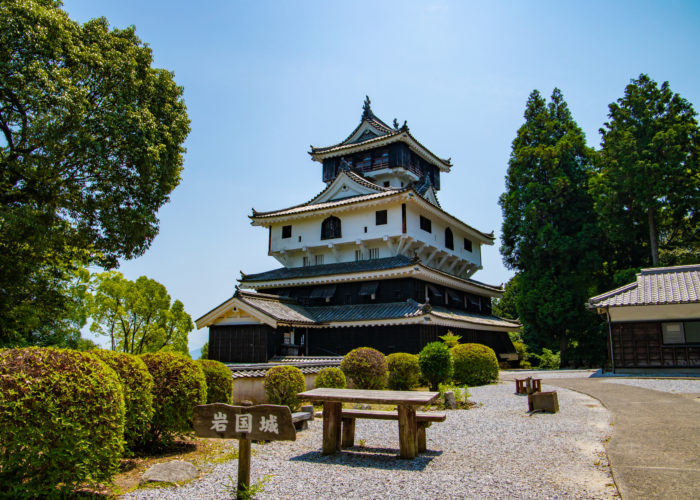 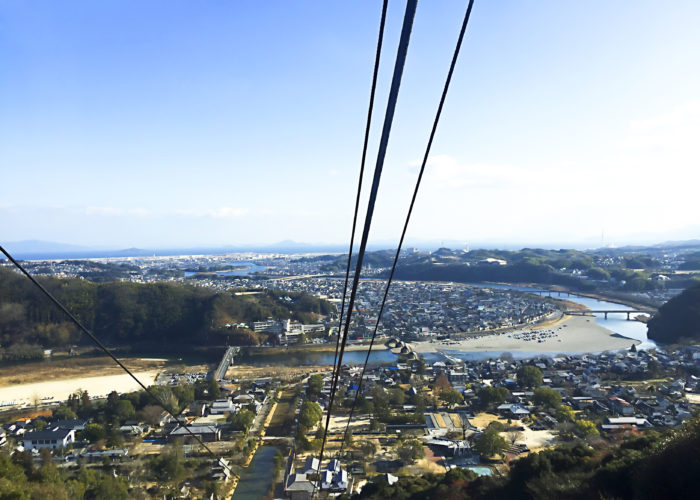 Iwakuni Castle, built in 1608, is a mountain castle with the Nishiki River as its natural outer moat. The castle was demolished by order of the shogunate seven years after it was built, and was rebuilt in 1962. The castle tower is an observatory from which you can see the whole of Iwakuni.
Data：Iwakuni Castle
Address/ 3 Yokoyama, Iwakuni, Yamaguchi 741-0081

From Iwakuni castle to the hotel
90min. by Highway bus

History of the Navy and Marine Transport in Kure city

Check out at the hotel

From the hotel to Yamato museum
60 min. by bus 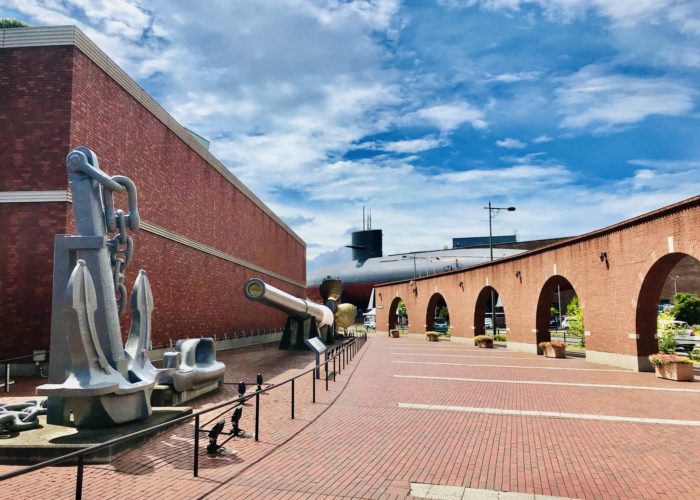 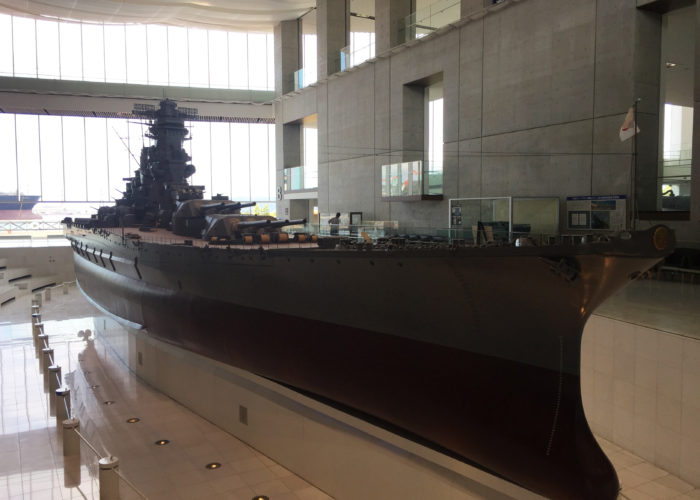 This is a science museum where you can learn about the history of Kure, which flourished as a shipyard. The highlight of the museum is the one-tenth scale "Battleship Yamato. The length of the ship is a remarkable 26 meters! There are also outdoor exhibits and a park adjacent to the museum, so you can spend a whole day here on a sunny day.
Data：Yamato Museum
Address/ 5-20 Takaramachi, Kure, Hiroshima 737-0029

From Yamato Museum to JMSDF KURE MUSEUM
1min. by walk 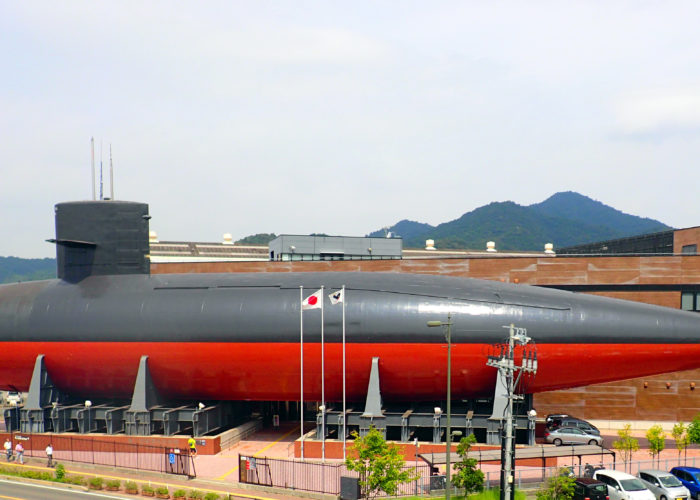 This is the first museum in Japan to display an actual giant submarine on land. The museum introduces the history of the Maritime Self-Defense Force and the historical relationship between Kure City and the Maritime Self-Defense Force. You can even board a real giant submarine, but on the ground!
Data：JMSDF KURE MUSEUM
Address/ 5-32 Takaramachi, Kure, Hiroshima 737-0029
TEL/ 0823-21-6111

From Kure Station to Hirosima Station
45min. by train

Back to Tokyo by Shinkansen

You can enjoy the cherry blossoms in spring, the cormorant fishing in summer, and the autumn leaves on a houseboat along the Nishiki River in Iwakuni. From the boat, you can see the Kintaikyo Bridge from directly below and have a tasteful time.

Mitarai flourished as a port town waiting for the wind and tide in the Edo period, and was selected by the government as a townscape preservation district in 1994. Mitarai, which has been reclaimed several times due to narrow land, is built with a mixture of merchant houses, teahouses, boatyards, residences, shrines, and temples.

The streetcars depart from JR Hiroshima Station one after another, and there is almost no waiting time. It's a very convenient transportation system that takes you not only to the center of the city, but also to Miyajima-guchi and Hiroshima Port. There is a wide variety of trains, from the latest models to the ones that were exposed to the atomic bomb.

This is a large gorge about 16 km long in Akiota Town, about 50 km deep in the mountains from Hiroshima City. A landscape like a Japanese painting awaits you. The scenery is especially beautiful in spring when the leaves are freshly green and in autumn when the leaves turn red. You can also experience kayaking and SUP.

Onomichi is famous as a city with many hills. It is also known as the starting point of the Shimanami Kaido. There is a tour on another page, please see #Setouchi for more details♪