HOME > Learn from the past by travelling > Guam 5days

Although Guam has been inhabited for thousands of years, it was ruled by Spain for over 300 years after Magellan discovered the island in the 16th century. Later, at the end of the 19th century, there was a war between the United States and Spain, and Guam was occupied by the United States. When the Pacific War began, the Japanese occupied Guam. Guam is known as a resort island for its marine activities and golf, but visiting historical sites is also good way to trip.

To the Tumon area of the resort town

To Two Lovers Point to watch the sunset

Cathedral built during the Spanish Formosa

The statue of Liberty
<Day4>

Relax on the beach

One of the pleasures, Shopping!

Dinner with a dance show
<Day5>

Move to the Airport

After watching the spectacular sunset over the ocean, recharge your energy with a dinner!

From Tokyo to Guam

From Airport to the hotel
15 min. by taxi

Check in at the hotel

From the hotel to Two Lover's Pont
10min. by shuttle 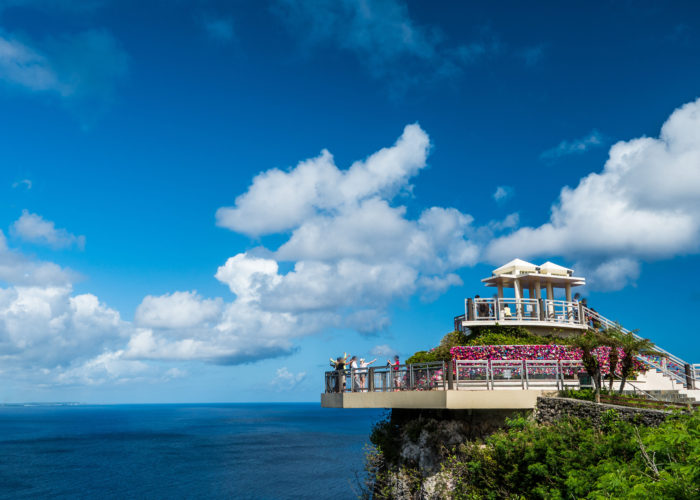 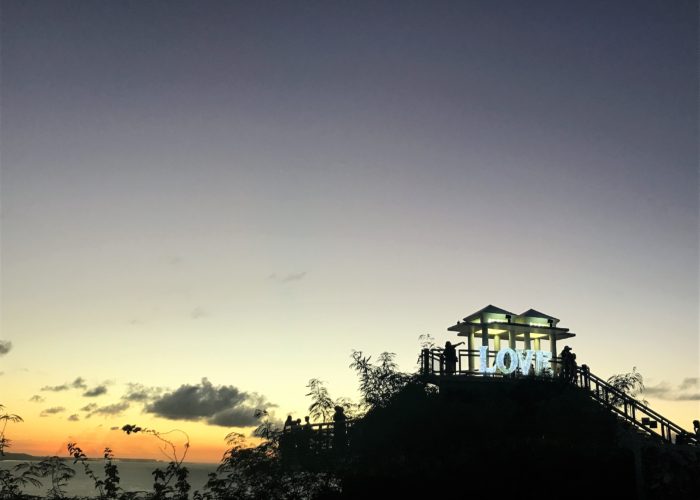 The observatory, jutting out from the cape, is on two levels and offers spectacular sunset views all season long. It is accessible by shuttle to Lover's Point.
Data：Two Lover’s Pont
Address/ Two Lovers Point Tumon Bay Tumon, Guam
TEL/671-647-4107

From Two Lover's Pont to City area
10min. by shuttle 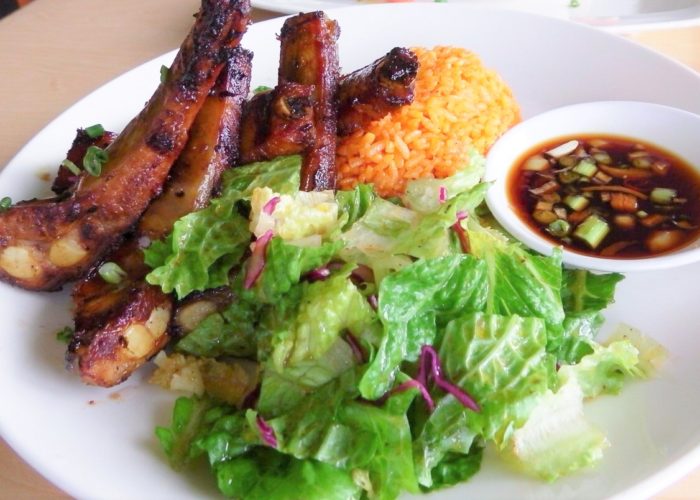 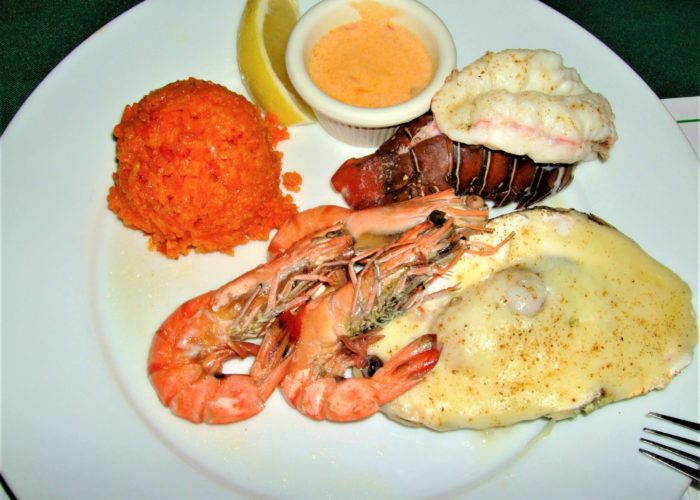 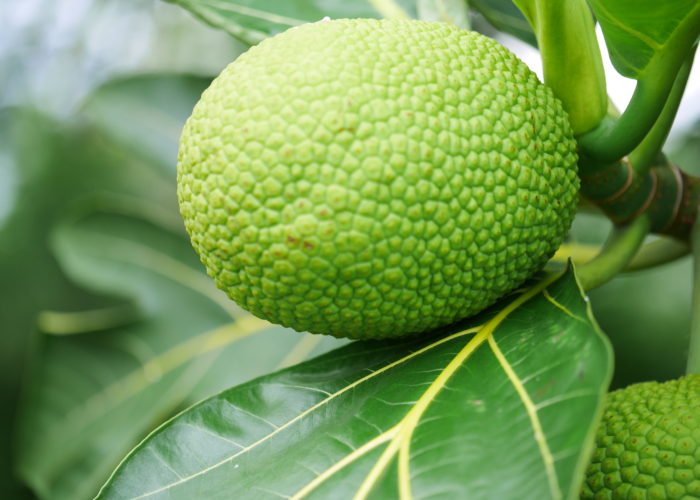 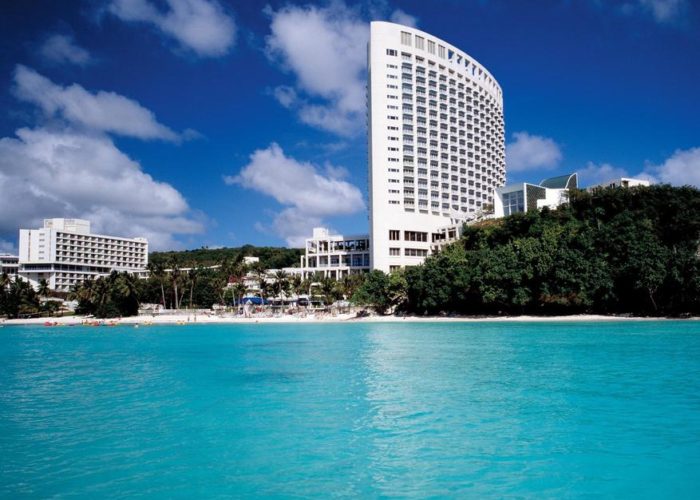 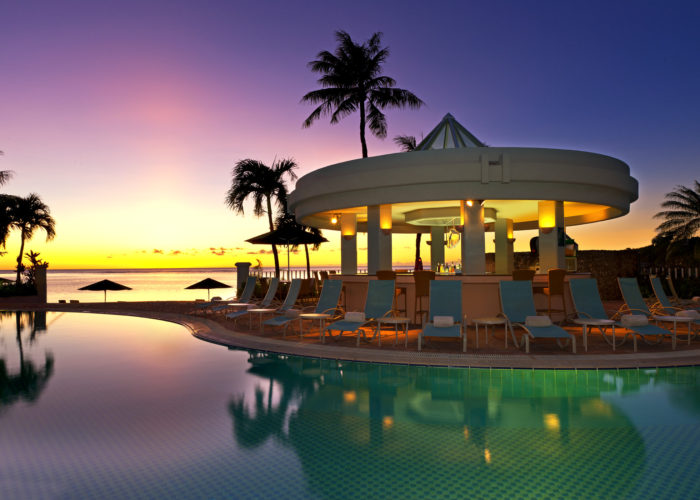 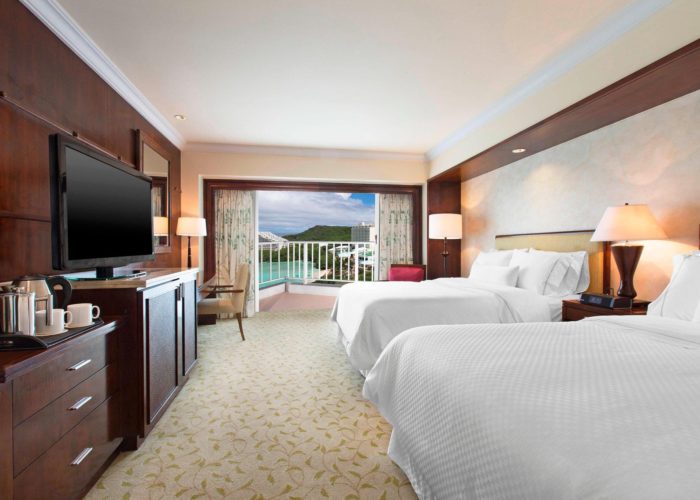 A perfect day for marine activities

Pick up at the hotel 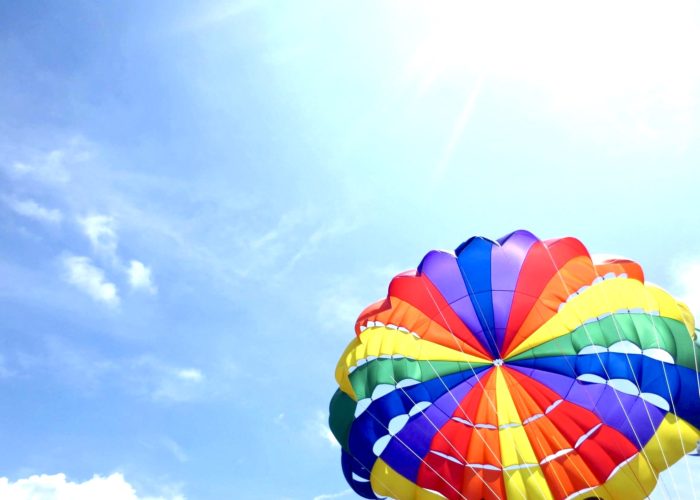 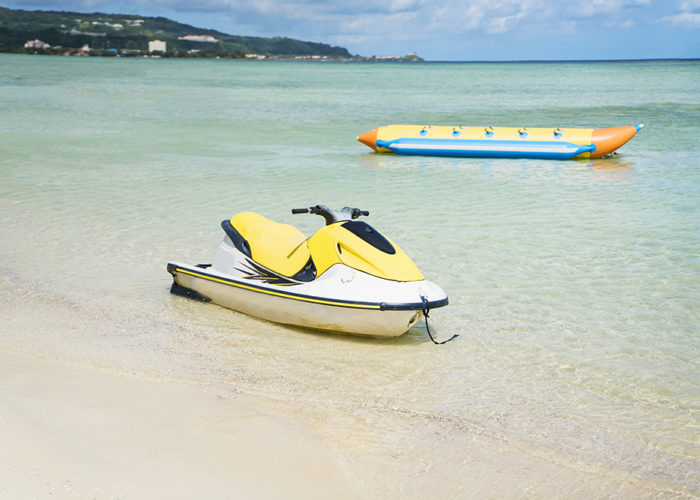 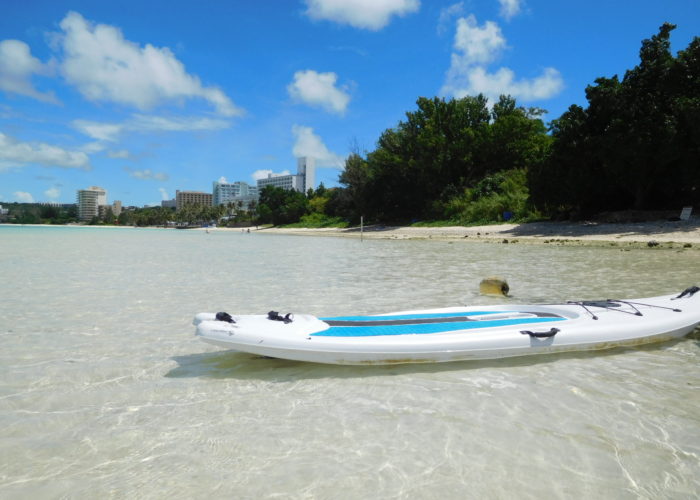 There are many popular activities in Guam . They range from half-day to full-day tours.Many tours pick you up from your hotel early in the morning, so you can have a full day of fun! There are many different types of tours, including marine sports such as parasailing and wakeboarding, diving, snorkeling, dolphin tours, and more！
Back at the hotel, take a break and go for a walk on the beach!

Travel back in time in historic Haganah.

Shuttle buses in Guam are so convenient! Take the shopping mall shuttle to Haganah!
Departure from the hotel

From the hotel to Latte Stone Park
20 min. by shuttle

This park is lined with mysterious stone pillars called latte stones. It is a relic of the ancient Chamorro culture before Guam was ruled by Spain, and the shapes are so unique. The ruins of shelter built by the Japanese Army during World War II also remain in the park.
Data：Latte Stone Park
Address/ West O'Brien Drive Agana, 96910 Guam

From the park to Plaza de Espana
1 min. by walk 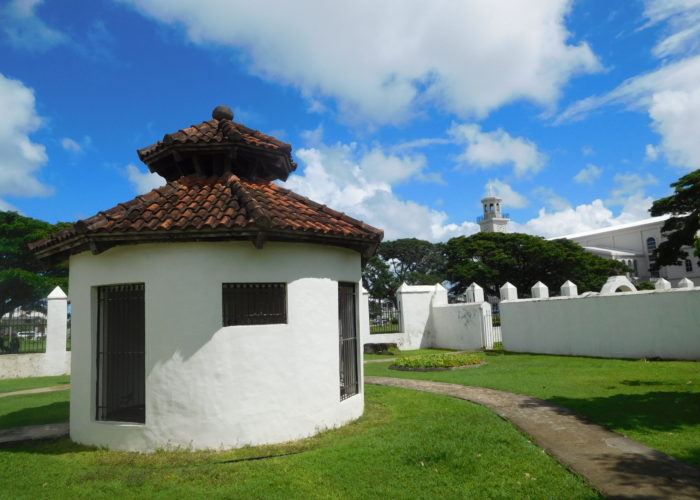 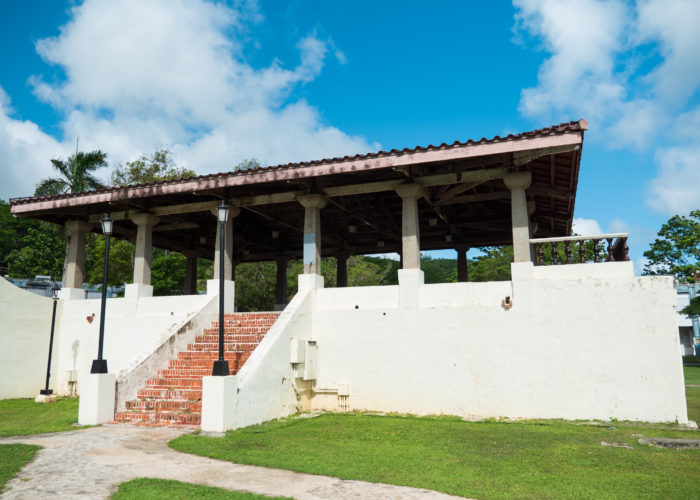 This park was originally the site of the Spanish Admiralty during the Spanish colonial period. The lovely chocolate house is said to have served chocolate drinks to visitors, and there are also historic sites such as the armory and pavilion.
Data：Plaza de Espana
Address/ Hagåtña, 96910 Guam 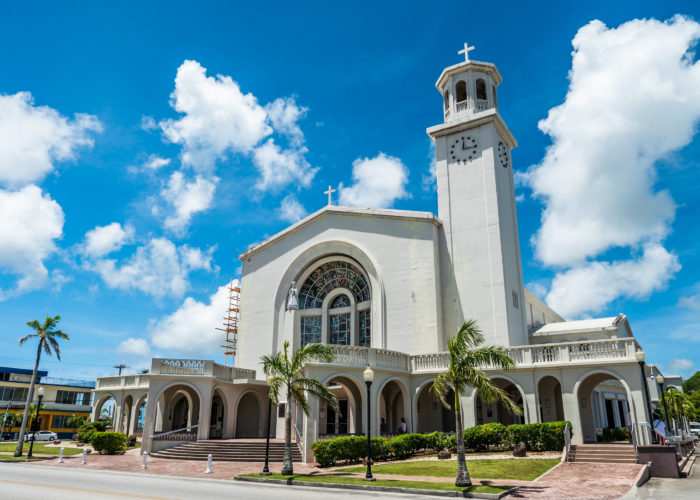 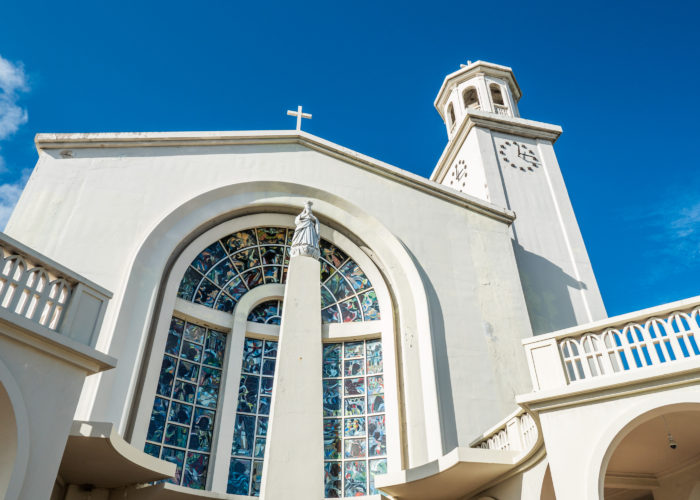 It is located in the center of the Haganian district and is the oldest Catholic church. Built by missionaries in the 1660s, the current church, built in 1958, has a pure white exterior that contrasts beautifully with the blue sky. The stained glass windows in the chancel are breathtakingly beautiful.
Data：Dulce Nombre de Maria Cathedral-Basilica
Address/ 207 Archbishop FC Flores St, Hagåtña, 96910 Guam
TEL/671-472-6201

From the Catholic church to Chamorro Village
10min. by walk 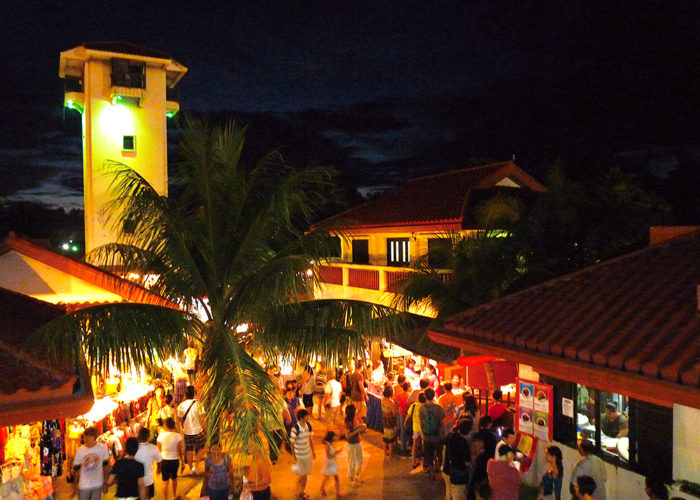 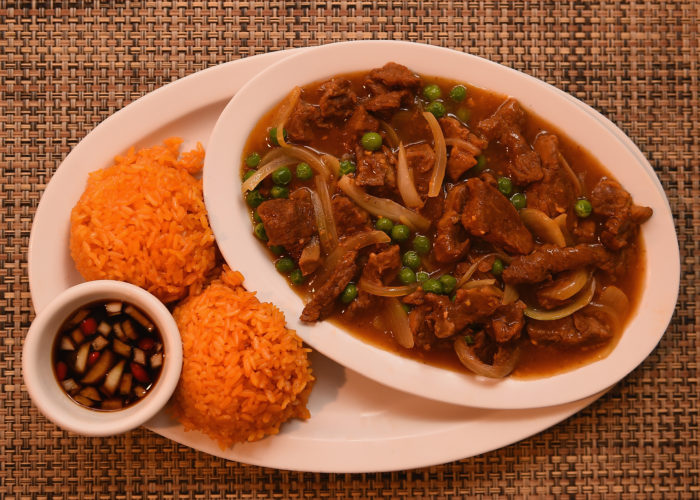 Let's have some Chamorro food!

Chamorro food is an original cuisine with influences from Spain, the United States, Japan, and the Philippines, and is often cooked with coconut milk. “Red rice" cooked with achiote nuts and "Kelaguen" marinated chicken, beef, or seafood with onions, lemon, coconut, and green chilies, are popular.
From Chamorro Village to Japanese pillbox
１min. by walk

From Pillbox to Statue of Liberty
4min. by walk 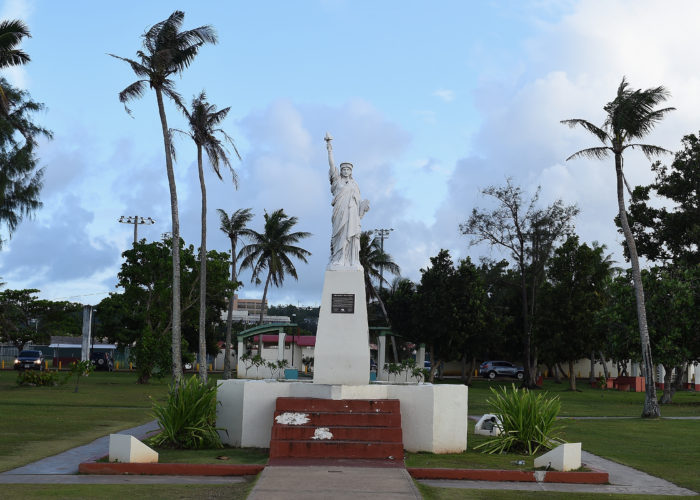 It is a 15-meter tall statue of the goddess that was donated when Guam residents were granted American citizenship for the first time in 1950, and is now in its second generation. Guam speaks English and uses the U.S. dollar as its currency, but as Guam is a U.S. territory, it does not have the right to vote in presidential elections.
Data：Statue of Liberty
Address/ Paseo De Susana Park, Hagåtña, 96910 Guam
TEL/671-472-6201

Back to Tumon Area.

From the park to Tumon Area
20 min. by shuttle

Relaxing on the beach, some shopping, and enjoying the resort. 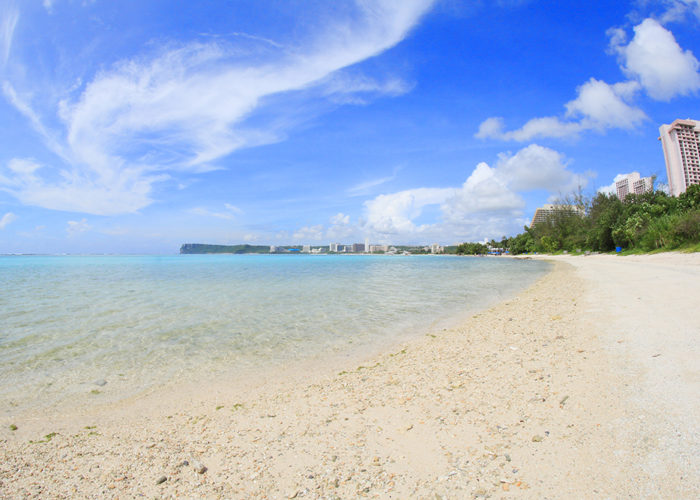 Ypao Beach, not far from Tumon Beach where many hotels are located, is a quiet and peaceful beach. There are toilets, showers, BBQ, and pavilions. It's a good place to rest when you get tired of the sun. On weekends, concerts and live events are held here.
Data：Ypao Beach Park 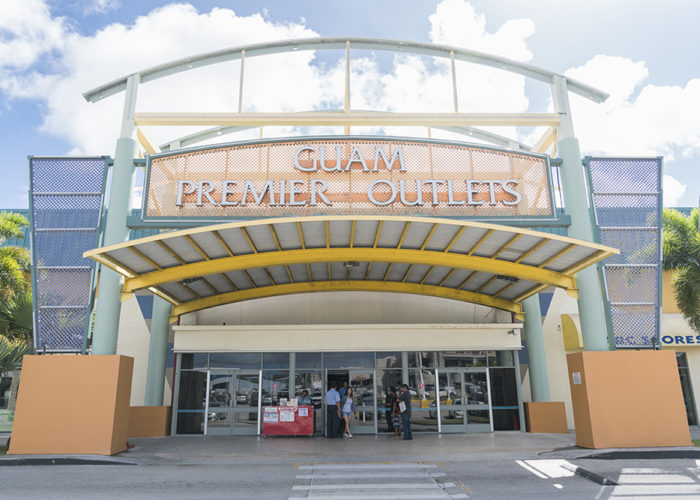 Guam is a shopper's paradise because there are no customs fees. There are many malls concentrated in a small area, so you can enjoy shopping to your heart's content... Guam Premium Outlets where you can buy things at bargain prices, JP Superstore, one of the largest select stores in Guam, and T Galleria where you can find brands from around the world.

On the last day, after daily moring walk on the beach, head to the airport!

Check out at the hotel.

From the hotel to airport
15min. by taxi

The flea market is held every Saturday and Sunday. Many of the stores close at 9 a.m., so get up early and head out! If you find something you like, don't hesitate to get it! Shuttle bus service is available.

A natural pool of seawater created by volcanic activity, wartime bombs, waves, and wind erosion. It is calm and safe to play in. There's even a diving board!

It is located about 15 km south of Haganah, in a hilly area with many ups and downs. Mr. Yokoi, who lived in hiding in the jungle for 25 years without knowing the war was over, had built a small cave in this area. The Tarofofo Waterfall, which is reached by a ropeway, is famous.

Only an hour and a half flight from Guam, Jeep Island is a tiny little island with a diameter of 35 meters and a circumference of only 111 meters. There are only two cottages on this island. It is the best place to soak in nature surrounded by the jewel-like sea.

Island hopping is a tour of Guam, Chuuk, Pohnpei, Palau, Hawaii, and other islands in the Pacific Ocean, flying across the small islands. The time spent on each island is short, but the view of the islands from the sky is fantastic! The routes vary depending on the airline.